FLNG market gears up for second wave of projects

Despite the cancellation of several floating liquefaction projects and financing concerns for other FLNG projects, Westwood expects capex on FLNG units to total $42 billion over the 2019-2024 period. This represents a 172% increase compared to the total expenditure of $15.5 billion over the 2013-2018 period. 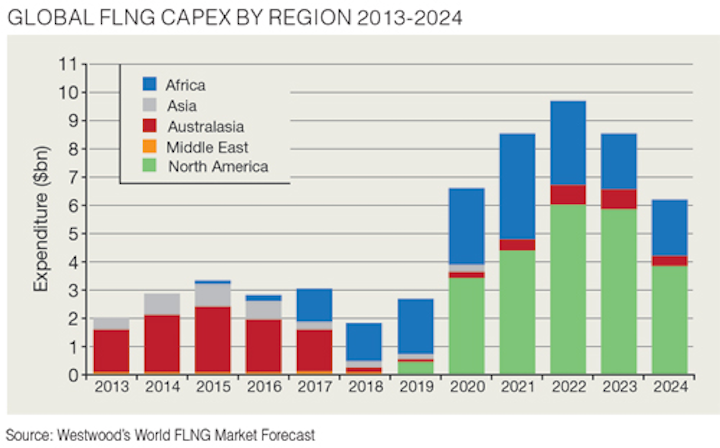 Despite thecancellation of several floating liquefaction projects and financing concerns for other FLNG projects, Westwood expects capex on FLNG units to total $42 billion over the 2019-2024 period. This represents a 172% increase compared to the total expenditure of $15.5 billion over the 2013-2018 period. Historically, expenditure has been driven by the pioneering projects, with majority of spend attributed to Shell’s Prelude FLNG, with an estimated cost of approximately $3,500 per ton per year. Other projects such as Petronas’ PFLNG Satu, Golar’s Hilli Episeyo, and Exmar’s Caribbean FLNG, also contributed to spend during the hindcast. Despite the challenges of the delayed delivery schedules for these projects, the consistent and stable level of LNG production from both PFLNG Satu and Hilli Episeyo (the only units currently in commercial production) has not gone unnoticed by investors. The successful production from these units, the positive performance test on the Caribbean FLNG in September 2016, and the expected commencement of commercial production from the Prelude FLNG unit in late 2018, represents a proof-of-concept and a win for the FLNG industry. 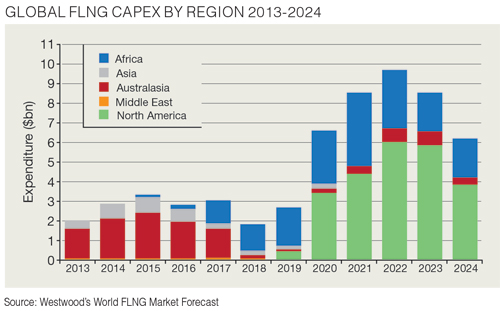 Following the success of these units, an upsurge in investments is expected over the forecast, with a total of 23 FLNG units, including NewAge’s Etinde FLNG unit, expected to pass final investment decision (FID) over the 2018-2024 period. Given the robust drivers supporting LNG demand in the long term, such as the decline in local gas production, fuel switching, and economic growth, some operators are looking to capitalize on the significant cost reduction within the supply chain caused by the downturn. Hence, a second wave of FLNG project sanctioning is expected to benefit from lower supply chain costs and innovative engineering and technology, with the cost per unit liquefaction capacity averaging $856 per ton per year for newbuild vessels. This represents a 66% decline compared to the average cost per ton per year for Petronas’ PFLNG Satu and Shell’s Prelude FLNG vessels. However, the cost of a converted FLNG unit is expected to be approximately 41% cheaper, averaging $503 per ton per year over the forecast.

Over the forecast period, North America accounts for the largest market in terms of overall expenditure on liquefaction vessels, with expenditure totaling $23.9 billion. Despite not having any historic FLNG investments, the region will account for approximately 60% of global expenditure over the 2019-2024 period. This will be driven by Fairwood’s Delfin LNG project and GLS’s Main Pass Energy hub. Both projects have proposed a total of six liquefaction units, with the first unit scheduled to be installed on the Delfin LNG project by 2022. This would be the first FLNG export scheme in the US. The first Delfin FLNG is expected to pass FID in early 2019, as the company has turned to Chinese banks for project funds. However, trade disputes between the US and China, in addition to concerns over the potential transfer of American technology and intellectual property to China, could present an issue for several US projects seeking finance from the Far East nation.

In Canada, Steelhead’s Kwispaa (At-Shore LNG) project is expected to be sanctioned by the end of the decade, with a proposed start-up of 2024 and initial production of 12 mmpta. The project will involve two FLNG units, with FID scheduled for 2020.

In Africa, gas discoveries in remote areas such as Tortue will further necessitate the use of the FLNG solution. Over the forecast period, Africa will account for 37% of expenditure, with seven FLNG units expected to be installed in the region over the 2019-2024 period. Compared to North America, where the capacity of FLNG units to be installed will range between 3-6 mmpta, units to be installed in Africa will have a relatively smaller liquefaction capacity averaging 2.3 mmpta. In the near term, spend in Africa will be driven by Eni’s Coral FLNG unit which was sanctioned in 2Q 2017 at a cost of approximately $5 billion. Samsung Heavy Industries recently commenced the fabrication of the hull of Coral FLNG which will be installed in 2,000 m (6,562 ft) water depth off Mozambique with an LNG throughput capacity of 3.4 mmpta. Start-up is planned for 2022. Another FLNG unit that recently passed FID is NewAge’s Etinde JV FLNG. An SBM-JGC consortium was awarded a contract to build an FLNG unit with a throughput capacity of 1.4 mmpta, and a planned start-up in 2023.

Despite the failure of the OneLNG joint venture between Golar LNG and Schlumberger, which has led to unexpected delays for the Fortuna FLNG project, Ophir Energy has not abandoned its development plans. The company’s plan is to reach FID before the end of 2019 prior to the expiration of the block license. Ophir Energy has now switched its focus to navigating a tricky financing huddle to be able to deliver the project.

Other units expected to be sanctioned in Africa include BP’s Tortue FLNG. Earlier in the year, Golar LNG signed a draft commercial, construction, and financing agreement with BP to use the Golar Gimi vessel to develop the Tortue project. The potential for additional FLNG units within block C-8 is very significant, as BP is considering up to three additional FLNG units for the next phase of the development of the Tortue-Ahmeyim project. An additional FLNG unit is also under consideration for the Yakaar-Teranga development located in the Cayar Offshore Profond block off Senegal. BP and its partners are expected to replicate the Tortue development concept to develop the 20-tcf gas field.

FLNG expenditure in Africa will remain buoyant over the forecast as other projects currently under consideration include Poly-GCL Petroleum’s Djibouti FLNG. The development is planned in three phases, with first LNG production scheduled for 2021 at 3 mmpta. A further phase will involve additional units expanding the capacity of the project to 10 mmpta. The development will involve the use of Sembcorp Marine’s GraviFloat FLNG concept, with FID expected in 2019.

Beyond Africa, other FLNG projects include Petronas’ PFLNG Dua. The unit is currently under construction at Samsung Heavy Industries’ shipyard, with start-up scheduled for 2020 at Murphy Oil’s Rotan field offshore Malaysia.

Australasia is forecast to account for 6% ($2.5 billion) of global floating LNG liquefaction capex over 2019-2024. Investment will predominantly be associated with the Kumul FLNG and Western LNG Project offshore Papua New Guinea. While several Australian FLNG projects such as Browse, Scarborough, and Cash-Maple have been shelved, Transboarder Energy plans to develop a small-scale FLNG project to be deployed in the offshore gas region of Australia, with an export capacity of 1.2 mmpta, by 2025.

Despite various project financing hurdles, the success of the pioneering projects will serve as a yardstick for stakeholders’ confidence. Hence, financing is expected to become easier in the long term, as a track record for the technology is established. A lease and operate model may evolve for medium and smaller deployments. Westwood expects 2018 to remain a landmark year for the industry, as Golar’s Hilli Episeyo entered commercial production. This project represents a proof-of-concept for low cost FLNG development.

With forecast spend that is expected to increase at an 18% CAGR, the entire LNG industry should brace itself for a stormy ride, as trade disputes between the US and China escalate. This could harm investments in several US LNG and FLNG projects, as Chinese gas demand is underpinning a raft of LNG export projects in the US. Furthermore, this could also hamper the flow of capital from Beijing, as China is expected to focus on domestic investments to mitigate the impact of US sanctions on its economy. This political dispute represents a downward risk to Westwood’s forecast expenditure in North America, as a 25% import tariff will see US LNG priced out of the Chinese gas market for various long-term contract negotiations. However, post-FID projects will remain resilient against tariffs, as they have already secured long-term export contracts.

Aside from escalating gas demand, driven by the need to switch to cleaner sources of energy and diversify gas supply, other key factors driving FLNG demand include technological advancement, monetization of stranded gas reserves, reduced development costs, shorter lead times, relocation flexibility, and lower space requirements. In the decades ahead, natural gas will continue to play an increasingly important role in meeting the world’s energy demand. In the long term, significant gas reserves discovered in remote regions such as the East African basin will continue to make the case for FLNG as a development solution. •

Mark Adeosun is the author of the World FLNG Market Forecast 2019-2024. Since joining Westwood in 2013, Mark has authored several industry reports and has also conducted high-level research into various oil and gas projects, with a focus on offshore drilling, subsea installation activities, and LNG. Mark has undertaken market modeling and analysis, focusing on offshore markets and E&P activities. Mark has a BSc degree in Geology and a master’s degree from the University of South Wales in Geographic Information Systems.