As operators and E&P firms seek to develop and produce oil and gas further out into the Gulf of Mexico, vendors and suppliers are facilitating these projects with a range of new and proven technologies designed to perform in harsh, deepwater environments. 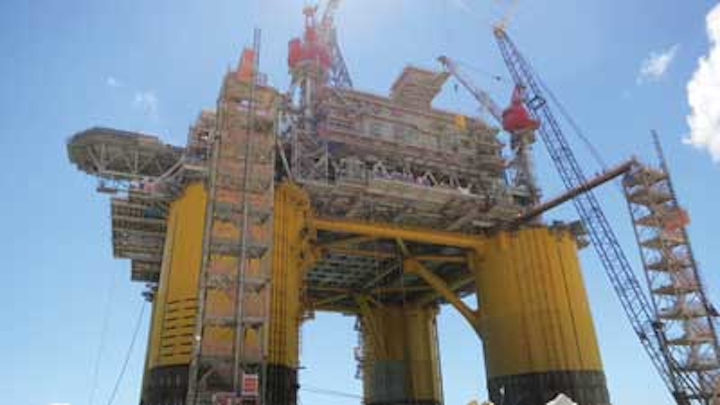 As operators and E&P firms seek to develop and produce oil and gas further out into the Gulf of Mexico, vendors and suppliers are facilitating these projects with a range of new and proven technologies designed to perform in harsh, deepwater environments.

On the drilling front, Statoil recently employed the Hughes Christensen Kymera drill bit for the first time in the Logan field, located in Walker Ridge blocks 925 and 969, in more than 8,700 ft (2,650 m) of water. A 26-in. Kymera hybrid bit with 19-mm cutters and premium metal face seals was used to drill the 26-in. vertical section through sediments and salt to section total depth, enabling 22-in. casing to be set 450 ft (137 m) deeper than the well's original objective.

Many of the technologies being deployed are for field development, and efforts are under way on a number of fronts. One of the more notable projects planned for the deepwater Gulf is the Stones project developed by Shell, which involves the deepest water FPSO unit in the world and Shell's first FPSO in the GoM.

Shell plans to develop Stones using an FPSO and subsea infrastructure with eight production wells ultimately tied back to the vessel. Tankers will take the oil to shore and the gas will go via pipeline. The field is in the Walker Ridge area some 320 km (200 mi) offshore Louisiana, at a water depth of approximately 2,900 m (9,500 ft). First production is scheduled for 2016.

In July, Shell contracted SBM Offshore to supply and lease an FPSO for the project. The initial contract is for 10 years with options to extend the agreement to 20 total years. The total asset value of the FPSO will be about $1 billion.

The convertedSuezmax FPSO will have a turret with a disconnectable buoy to allow it to weathervane in normal conditions and disconnect upon the approach of a hurricane. The buoy turret mooring will be configured with steel lazy-wave risers, a first for a disconnectable FPSO. The mooring system will also incorporate the ability to adjust line tension during operations by use of an in-line mooring connector.

More recently, Shell awarded Technip an engineering, procurement, and installation contract for subsea infrastructure for the project. Under the agreement, Technip will install the subsea production system and Stones' lateral gas pipeline, and also will provide associated project management, engineering, and stalk fabrication. The production system design calls for dual 8-in. insulated flowlines associated with pipeline end termination (PLET), and dual 8-in. steel lazy wave riser (SLWR). The Stones lateral gas pipeline will comprise a single 8-in. gas pipeline associated with PLET, in-line sled, and a single 8-in. SLWR.

Technip's Houston office will perform the overall project management. The flowlines and risers will be welded at the company's spoolbase in Mobile, Alabama. The offshore installation is expected in the second half of 2014 byDeep Blue, Technip's deepwater pipelay vessel.

Shell is also making progress on Mars B, another deepwater GoM project. In early August, Shell announced that the Olympus TLP reached its destination at the deepwater Mars field and was safely secured in place at the end of July.

The 120,000-ton structure, said to be the largest TLP ever developed for the GoM, is expected to start production in 2014 at a rate of 100,000 boe/d. Olympus, the centerpiece of the Mars B development, will be moored in 3,000-ft (914-m) water depths in the Mississippi Canyon area, about 1 mi from the existing Mars platform, which has been producing since 1996.

During a June 5 tour of the TLP at the Kiewit Offshore Services yard in Ingleside, Texas, Shell officials said the Mars B project is the first in the region to employ an additional floating production system in a producing deepwater field. At that event, John Hollowell, Shell's executive vice president for deepwater, said that "this is the first time in the Gulf of Mexico that a company has built another host structure to go in an existing field," rather than using subsea tiebacks to expand a field.

The new TLP hosts 24-slot drilling unit supplied by Nabors Industries and includes capacity for six subsea wells to gather production from the nearby West Boreas and South Diemos fields. Noble Corp.'sNoble Bully I has drilled the top sections of the 24 wells at Mars B, and is on location to drill the satellite wells at West Boreas and South Diemos.

The project is expected to extend the field life of Mars to at least 2050, Hollowell said. Shell has said the field could contain recoverable reserves of 1.1 Bboe. Shell operates the field with 71.5% interest; partner BP holds the remaining 28.5% interest.

When Olympus begins production, the focus of the existing Mars production platform will shift to the field's shallower reservoirs and to water injection. Olympus, outfitted with 15,000-psi rated trees furnished by FMC, will concentrate on high-pressure reservoirs that range in depth from 20,000-22,000 ft.

Shell will install a third platform at its West Delta 143 gathering hub to link production from Mars B with existing pipeline infrastructure. Heerema'sBalder deepwater construction vessel will be used to install the TLP.

Chevron is also advancing plans for the Buckskin/Moccasin project, located in Keathley Canyon blocks 785 and 872 offshore Louisiana in 6,978 ft (2,127 m) of water. In July, WorleyParsons reported that it had been selected by Chevron to provide engineering services for the Buckskin/Moccasin production semisubmersible. WorleyParsons and INTECSEA will perform the pre-front-end engineering and design for the subsea architecture, riser interface, and topside facility design for the oil and gas production facility. The development is in the Lower Tertiary trend of the outer continental shelf. The Buckskin prospect is owned by Chevron, Maersk Oil, Repsol E&P USA Inc., and Samson Offshore LLC. The Moccasin prospect is owned in part by Chevron and Samson.

Meanwhile, ExxonMobil is also moving forward with plans for its Julia tieback project in the Walker Ridge area, 265 mi (426 km) southwest of New Orleans, in water depths of more than 7,000 ft (2,133 m). Nexans will supply a power umbilical to OneSubsea for the project. The contract calls for design, manufacture, and supply of an integrated power umbilical and termination hardware. The 23-km (14-mi) long umbilical will be installed in water depths reaching more than 2,000 m (6,560 ft) to tieback Julia's subsea systems to a semisubmersible production unit. Julia is scheduled for a 2016 startup.

Recently, Anadarko awarded Subsea 7 a contract for engineering, fabrication, and installation of risers, pipelines, and flowlines in water depths of 1,600 m (5,248 ft) and more. Project management is under way at Subsea 7's Houston office with offshore operations scheduled for 4Q 2014, and pipelay operations will be performed by theSevenBorealis.

Further south in the Gulf, PEMEX Exploration and Production has signed an $84-million agreement with GE Oil & Gas to supply and install subsea wellheads in deep and ultra-deepwater drilling projects. GE will supply SMS800 and DWHC 700 high-capacity wellheads; similar GE technology is installed at several other Mexican oil fields, including Perdido, Lakach, and Kunah. Perdido is in water depths of 500 m (1,640 ft) or more. Kunah is 125 km (78 mi) northeast of Veracruz in 2,157 m (7,077 ft) water depth. Lakach is in about 988 m (3,241 ft) of water.