Offshore development in Latin America is expected to remain dominated by Brazil until the end of the decade. 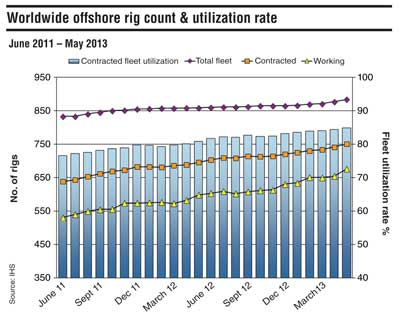 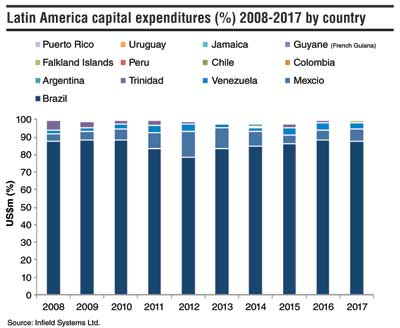 Offshore development in Latin America is expected to remain dominated by Brazil until the end of the decade. Infield Systems expects 86% of the regional offshore capital expenditure to be attributed to Brazilian developments between 2013 and 2017. Operator Petrobras is anticipated to account for an 89% share of the market with key projects including the Lula and Franco multi-phase developments. Infield Systems expects the largest proportion of the operator's capex to be directed toward the subsea market, with pipeline developments also forecast to demand a significant share of the operator's investment. An additional 10 operators are expected to direct capex offshore Brazil going forward to 2017. Anadarko and OGX-EBX Group are expected to lead investment during the period on fields including Wahoo and the Waimea/Fuji development for the respective operators. In terms of water depth of developments offshore Latin America, 64% of total capital expenditure is expected to take place in water depths of 1,500 m (4,921 ft) or greater. Brazil's presalt prospects are expected to continue to lead the market for deep and ultra-deepwater development.

Elsewhere, capital expenditure is expected to take place across 12 additional countries. Mexico, Venezuela, and Trinidad are forecast to be the largest markets outside of Brazil for offshore development. The most significant investment is expected on the Ayatsil, Lakach, and Noxal fields offshore Mexico during the period. Offshore Venezuela, capex is likely to be directed toward 13 fields. Offshore Trinidad is also expected to have 13 fields require investment during the period, with key operators anticipated to include BG Group, BHP Billiton, and Centrica. – Catarina Podevyn, Analyst, Infield Systems Ltd.