This summer Saipem is due to launch and install the jacket for the Mariner field platform east of the Shetland Isles. 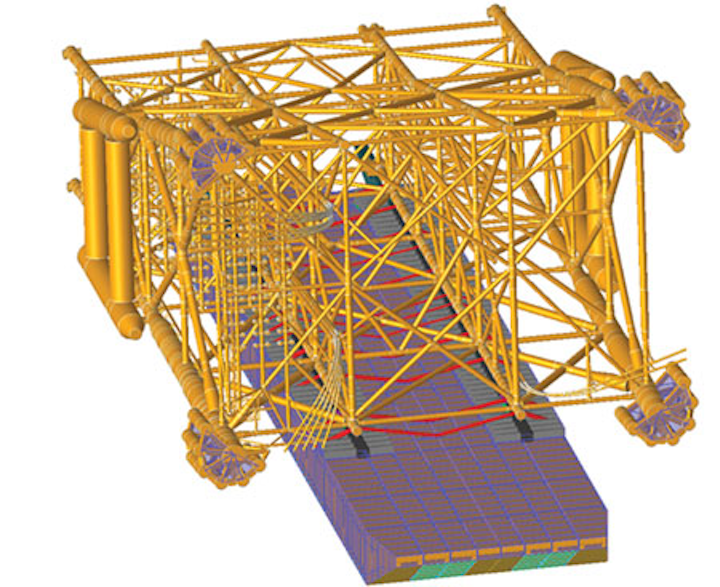 This summer Saipem is due to launch and install the jacket for the Mariner field platform east of the Shetland Isles. The $7-billion project is the largest current greenfield development in the UK North Sea, and Statoil’s first as operator in the UK sector.

The 22,400-ton jacket and the 54,000-ton topsides, to be installed next spring, will form the production, drilling, and quarters platform, with produced oil stored on a floating storage unit alongside for offloading to a shuttle tanker. Statoil aims to start production in early 2017 and to keep the field in production for 30 years.

Shortly before receiving formal UK government approval for the project in early 2013, Statoil awarded engineering, procurement, and construction contracts to Dragados to build the jacket in southwest Spain and to Daewoo in South Korea for the topsides. SNC-Lavalin’s division in the UK, which had earlier performed front-end engineering and design for the jacket, also performed detailed design of the structure, working in close cooperation with Dragados.

David Maclaren, head of Structures–Offshore at SNC-Lavalin, outlined the main engineering issues for the jacket at Bentley’s Year in Infrastructure conference in London late last year. The engineering team adopted Bentley’s SACS and STAAD.Pro software for 19 interrelated analyses of structural strength requirements in different scenarios and for detailed design of secondary steel components. The topsides designer Aker Solutions used the same software, and both parties shared their models and analyses throughout the construction process with the jacket and topsides fabricators, another engineering center in India, and third-party verification specialists in London and Norway.

Texaco originally discovered Mariner in the 1980s. Recoverable reserves are estimated at 250 MMbbl, but the combination of heavy oil and complex reservoirs ruled out development until technologies finally emerged to make production economic. Statoil’s solution involves importing lighter crude mixed with water into a diluent and installing electric submersible pumps into the wells in order to drive the oil out. The jacket will feature 60 conductors which could eventually accommodate 80 production wells and more than 60 water re-injectors.

Aside from the conductors, the jacket will be connected to three risers and 16 caissons, with 13 j-tubes to connect future risers and umbilicals. “It’s a really massive structure,” Maclaren said, “connected to the seabed by 24 piles, all 8-in. diameter, penetrating 400 m [1,312 ft] below the seabed and connected via traditional grouted connections.

“To design this kind of structure we need to perform a huge number of different analyses, all of which interrelate to each other, and the complexity of that means we have to repeat the analysis after each one is completed. We then have to go back and recycle some of our other analyses and use Bentley’s suite of SACS programs to perform further analysis.”

The priority is to cover all eventualities once the jacket is in place, including whether it can survive a 100-year storm in the area without progressive collapse, Maclaren said. “In this case, that means 27-m [89-ft] peak-trough waves – equivalent to seven stories high – passing through the structure. That’s what we have to simulate in our design, ensuring that the forces are not excessive and that the braces are all adequate for purpose.”

The jacket is engineered to survive 40 years without further recourse to repairs for fatigue damage. This entails analysis of each individual element, effectively to ensure survival for 400 years in some cases, Maclaren explained, equivalent to a factor of 10 in fatigue life. “We also have to look at the 10,000-year storm scenario to ensure the structure doesn’t collapse.”

For load-out of the completed jacket from Dragado’s yard in Puerto Real, SNC-Lavalin’s team built a SACS model of the structure in a horizontal position. This took into account potential stresses along the load-out grillage; the load-out beams on the bottom; and the forces acting on the jacket during its subsequent voyage on a transportation barge, pulled by tugs and ballasted to a certain level within the water. In this case, the route takes in the Bay of Biscay off northern Spain and the English Channel, before continuing up the North Sea. “It’s quite a long tow,” Maclaren said, “so we have to design for that worst-case scenario.”

“Once at the site, we then have to launch from the barge into the water [using SACS’ launch model]. This is one of the most nerve-wracking moments for an engineer, because we want to ensure that when we launch the jacket it floats and doesn’t get too close to the seabed, which is relatively close in this case.” The jacket is 135 m (443 ft) tall, while the water depth at the location is 110 m (361 ft).

“The jacket will be upended from a heavy-lift vessel. We analyze the different stages of the upending sequence with slings added to the model between the hook point and the jacket lift point…ensuring only the axial load is carried.”

According to Maclaren, both the third-party verification company and an independent competent persons’ report confirmed that the design achieved a high level of utilization in the jacket, allowing SNC-Lavalin to minimize wastage of materials and reduce project cost. “The installation risk was also mitigated by using SACS to design the installations systems and the structural launch analysis. The redundancy analysis allowed our engineers to… ensure accelerated impact scenarios would not cause the overall structure to fail; and the safety of the design was demonstrated by conducting simulated blast analysis and non-linear analysis such as bolt impact.”

“The long-term integrity of the structure is provided by ensuring the detailed fatigue and fracture mechanisms assessment and providing adequate corrosion protection to ensure integrity for the 40-year life of the platform.” •