Another revolution is in the works for offshore oil and gas production - one caused by a new semisubmersible production platform named after the home of the boisterous college fraternity in the 1978 comedic film, "Animal House." 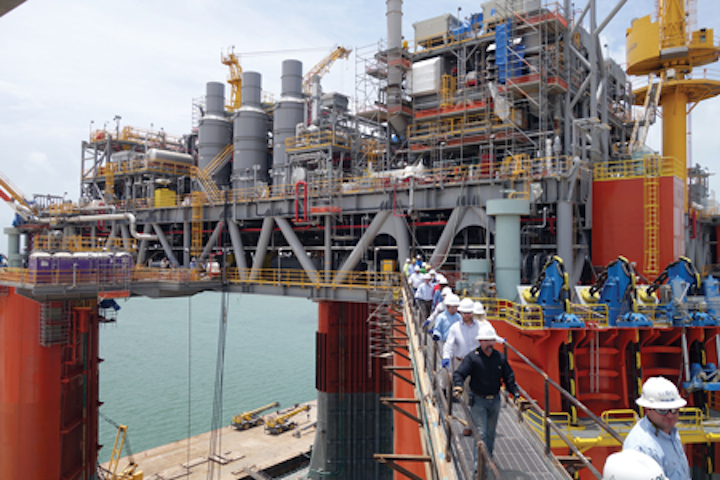 Another revolution is in the works for offshore oil and gas production - one caused by a new semisubmersible production platform named after the home of the boisterous college fraternity in the 1978 comedic film, "Animal House."

The field development is an example of how independent, privately-held companies that once focused on shallow-water opportunities are now wading into deeper waters. Moreover, these companies seem to be taking their fast-moving, "shallow-water" ways with them into water depths that have long been the domain of the deep-pocketed majors.

Reasons for the transformative nature of Delta House go back to early 2010, when a group of joint venture partners began to realize the potential of their recently-acquired portfolio of leases. The challenge was how to drill them in less than 36 months before the 20 or so deepwater leases timed out. The one-time presidential lease suspension of operations reset the clock to give more time, but it would still require a big effort to maintain the leases.

Getting a head start

One of the distinctions used in the case ofDelta House was project scheduling. In addition to the leasehold considerations, participating company LLOG Exploration Co. (LLOG) has long had a priority of generating a speedy return on investment (ROI). To meet its ROI goals and secure future investments elsewhere, the company developed an accelerated production schedule for the project. It also had to meet the requirements of regulatory authorities, including the Bureau of Safety and Environmental Enforcement and the US Coast Guard as well as the classification requirements of Det Norske Veritas. To accomplish this, LLOG worked with external resources, such as Audubon Engineering Solutions, which served as the topsides engineering contractor on the project.

Most major oil and gas companies active in offshore activities will take the time-honored approach, which involves discovery, delineation wells, and studies of the reservoir characteristics. This is followed by front-end engineering and design (FEED), requesting several bids for production platform types, which may include provision for a drilling rig included on the production platform. Only then, detailed design and construction would begin.

The goal of LLOG's approach was to shorten the timeline for faster production. This included starting work on the engineering of the production platform even before a discovery was made. The designers' purpose was to develop a platform that could be expected to work within a range of reservoir characteristics. It was expected that the platform would be working with more than one field, combining hydrocarbons from a variety of wells.

Delta House's design can work with crude ranging from 28 to 37° API. The platform and its equipment could work slightly outside that range with some cost to capacity.

The company felt that the benefits of getting to production faster was worth the potential downside of having a platform that was not customized exactly to the characteristics of the reservoirs from which it would be extracting hydrocarbons. LLOG and Audubon Engineering Solutions estimated that production could start three years sooner than with the traditional "Big Oil" approach.

Another reason the company was able to shorten the timeline compared to the usual approach taken by the major oil companies is the extreme detailed requirements that the larger companies have for their deepwater platforms. While many of these specifications have their value, they also have the tendency to slow down the design and construction of platforms. As a smaller, newer company, LLOG does not have this legacy of requirements and was able to develop its own specifications for the project. These specifications meet or exceed industry standards as well as the regulations of all applicable authorities.

When the platform was in the design phase, LLOG did not possess the specific characteristics of the reservoirs, particularly the profile of the hydrocarbons.

If the processing requirements were greater than theDelta House name plate of 80,000 b/d, LLOG decided it would be better to build a second production platform than to revise plans in order to build a single larger-capacity platform. If the hydrocarbon flow turned out to be less than expected, the company would be able to shop the platform's capacity around so other companies' wells in the area could be tied into the facility.

As such, Audubon Engineering Solutions used the "one-size-fits-most" design that would work with a wide range of hydrocarbons and sizes of reservoirs and be able to meet LLOG's stringent timeline. During the design, Audubon Engineering Solutions' project team collaborated with the fabricators and vendors to ensure equipment construction was completed on time and in accordance with specifications.

The one-size-fits-most design has other benefits as well. With a platform design that can work in a wide range of circumstances, the company can use the same design on future platforms. Because detailed design has already been done and areas for possible improvement noted, a second similar platform will be relatively easy to build.

Delta House was designed for the demanding environment of the Gulf of Mexico, where the risk of hurricanes sets a high standard for safety. Lessons learned in its design can be applied to other offshore environments with fewer weather-related risks.

TheDelta House integrated structural deck and topsides facility was designed as a single-level platform, unlike the three-level configuration of many offshore platforms.

On a multi-level platform, if a piece of equipment for a lower level is delayed, it is impossible to float over that area of the deck until that item arrives and can be installed. A single, "Texas-style" deck means that there were fewer items on a critical path.

Accordingly, Audubon Engineering Solutions designed the topsides so the construction could be completed entirely on the ground and then hoisted into place on the columns in a single lift. Being able to perform the equipment installation and the fitting of utilities, such as pipes and cabling, on the ground made construction easier- and thus cheaper - than having to do it 75 ft (23 m) above the water.

The topsides also required complex calculations to ensure that the structure had a center of gravity (CG) that was very close to the geographic center of the platform, so the structure could be hoisted evenly and then lowered onto the columns. To do this, Audubon Engineering Solutions worked closely with hull designer EXMAR Offshore to check for design accuracy. Through the use of its plant design management system model and weight control program, Audubon Engineering Solutions was able to closely monitor the CG and make equipment location adjustments as required to maintain the CG within the acceptable tolerances. The company's design team also worked with Kiewit Offshore Services, the topsides' fabrication and integration contractor, to keep the topsides deck within the limited 10,000-ton (9,072-metric ton) lifting requirements of the heavy-lift device booms. Kiewit Offshore Services and other equipment vendors supplied actual equipment weights during construction, and these weights were fed back into the weight control program.

Simplification also applied to the chosen equipment. Selections were made based on the ease of maintenance for approximately 25 Delta House crew members. This is in contrast to many platforms from major companies that may have more than 100 personnel, particularly if the platform includes a drilling rig. In Delta House's case, the structure is only designed to be a production platform.

Another benefit to the single-deck design is how the design can be applied to future projects. For example, if there is a need for a different size of quarters on a subsequent platform, the design will be relatively easy to modify in order to fit the quarters on the platform.

Innovations such as these will not work for all circumstances. However, the lessons learned from the Delta House project may help usher in some advances that will make offshore oil and gas production more flexible in meeting changing conditions. •

Denis Taylor, P.E, is a managing partner with Audubon Companies, based in Metairie, Louisiana.

Rick Fowler is vice-president of Deepwater Projects with LLOG Exploration Co., based in Covington, Louisiana.