Norway's far north looks set to remain the hot-spot for frontier exploration offshore northwest Europe this year. During 2014, WesternGeco and PGS acquired an extensive 3D seismic survey for a consortium of 32 oil companies over the eastern part of the Norwegian Barents Sea. 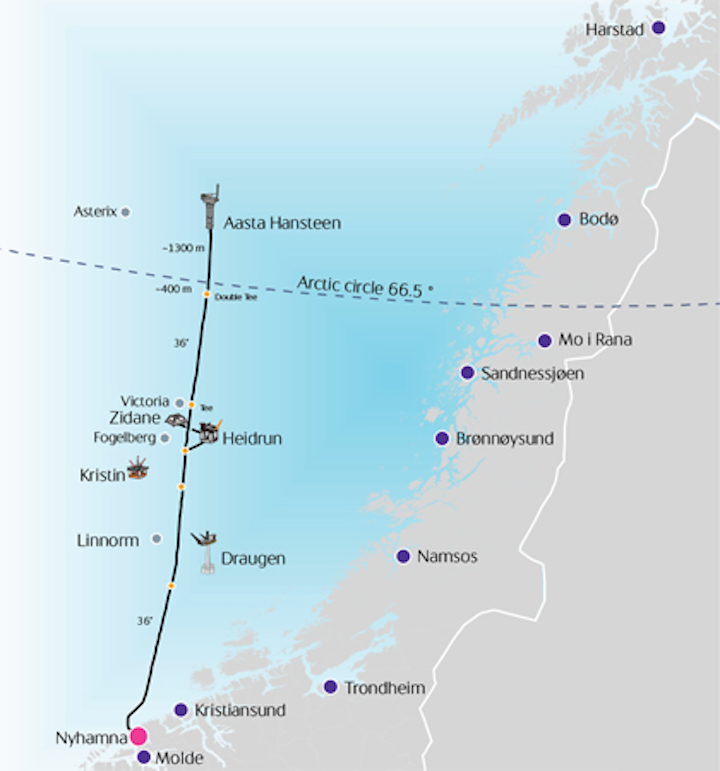 Norway's far north looks set to remain the hot-spot for frontier exploration offshore northwest Europe this year. During 2014, WesternGeco and PGS acquired an extensive 3D seismic survey for a consortium of 32 oil companies over the eastern part of the Norwegian Barents Sea. Much of this area had been off-limits until the recent resolution of a maritime border dispute between Norway and Russia.

Processing of the data is expected to be completed this summer and will be available to companies preparing bids for the 57 blocks/part-blocks offered under the 23rd Norwegian Licensing Round. Most of the available acreage is in the Barents Sea.

Lundin Petroleum has been one of the most active and most successful drillers in the region. Its latest success was last year's Alta oil and gas discovery, a potential 400-MMboe resource, which is on trend with the company's earlier Gohta gas/condensate find. Lundin recently spudded the first of two planned appraisal wells this year on Alta, and may drill again on Gohta later in 2015.

Later this year, Eni should bring onstream Goliat, the first oil field development project in the Barents Sea, which has been delayed due to issues with construction of the platform, a Sevan-designed circular FPSO.

In the Norwegian Sea, Statoil has strengthened the economics of Aasta Hasteen, at 1,300 m (4,265 ft) Norway's deepest-water development to date, by proving gas and condensate in the nearby Snefrid Nord structure. The added reserves could increase the resource base for the Aasta Hansteen project by 15%, and Statoil was hoping for further success from its current follow-up well on the Roald Rygg structure.

Production from both discoveries could be sent to the Aasta Hansteen spar platform, which will export the separated gas through the new 482-km (300-mi), 36-in. Polarled pipeline that Allseas'Solitaire started laying in March. It should be completed in August, finishing at the Nyhmana gas processing terminal on Norway's west coast. This will be the first major gas pipeline infrastructure within the Norwegian Arctic Circle, and will feature tie-in connections for future development of other fields along the route.

In the North Sea, Statoil and its partners have put back until late 2017 an investment decision on a third platform, designed to increase recovery and prolong production from the giant Snorre oil field. Aside from the need to scale back costs, more time is needed to assess the complexities of the reservoir, Statoil says.

Toward year-end, Lundin should start production from the $3.7-billion Edvard Grieg project, the first of several in the prolific Utsira High region of the central Norwegian North Sea. Lundin continues its high success rate with the drill bit in this region, its latest breakthrough being a gas discovery earlier this year on the Zulu structure, 30 km (18.6 mi) northeast of the Johan Sverdrup field.

Offshore Denmark, the Maersk-led DUC consortium has started operations at the new Tyra Southeast-B platform at the Tyra field complex, 220 km (137 mi) from the Danish west coast. The partners plan to drill up to 12 horizontal wells from the new facility, each 6 km (3.7 mi) long. Work continues in the same sector on the Ravn oil field, Wintershall's first Danish development project.

Exploration drilling in UK waters has plummeted in recent years, with independent oil companies unable to attract funds to help open new plays. This has led to an alarmingly low rate of reserves replacement, although production across the sector rose last year as several major new field developments came onstream. This year's start-ups should include Total's long-distance subsea-beach Laggan-Tormore gas/condensate project west of Shetland, recently expanded to tie in the Edradour and Glenlivet fields; Premier's oil production platform at Solan, west of Shetland; and Dana Petroleum's Western Isles floater, east of the islands.

In the southern North Sea, GDF Suez's four-platform complex should enter service toward year-end on the 635-bcf Cygnus field, the second-largest gas discovery in this region of the past two decades. It is only eclipsed by the DEA-operated 690-bcf Breagh, where the partners may sanction a second platform on the eastern part of the field following successful results with hydraulic fracturing in wells drilled from the platform at Breagh West.

Shell should finally land first gas from the Corrib field offshore western Ireland that Enterprise Oil discovered in the 1990s. Progress on the subsea facilities and export pipeline have been delayed for years by objections over the impact on peat bogs close to the location of the pipeline's onshore landfall. •