Ultra-deepwater to capture most of Brazil's offshore capex 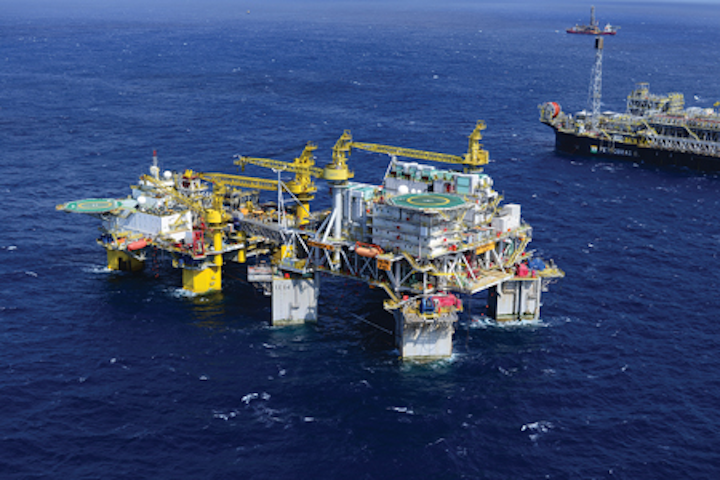 Within the 2,500+ m (8,200+ ft) water depth range, Infield Systems expects important fields to include the Repsol/Sinopec-operated Gavea development, where capex is likely to be directed toward subsea infrastructure and a possible FPSO development. It also expects significant capex to be required by Petrobras' 2,500 m (8,202 ft) water depth Iracema Sul field during 2015 and 2016.

Spectrum should have recently completed a 12,000-km (7,456-mi) multi-client 2D seismic survey offshore Brazil's Pelotas basin. The new acquisition is expected to infill both of Spectrum's 7,500-km (4,660-mi) survey acquired in 2013 and 12,000 km of data reprocessed in 2014. The area covered likely will be included in the next licensing round, expected late this year. Again, any political repercussions from the investigation of Petrobras could affect how the state government proceeds with existing plans.

So far this year, Petrobras has brought onstream a number of new wells and field-wide production systems in the Campos and Santos basins. It also has started up tension leg wellhead platformP-61 at the Papa-Terra field in the Campos basin. In a water depth of 1,200 m (3,937 ft), P-61 comprises the Papa-Terra field production project, along with FPSO P-63, which went into operation in 4Q 2013. Currently, there are five production and six injection wells connected to P-63, with five more injection wells scheduled. Plans call for 13 production wells to be interconnected to P-61. Papa-Terra is operated by Petrobras (62.5%) in partnership with Chevron (37.5%).

At almost the same time, Petrobras began start-up of the early production system at the Búzios field in the Santos basin. This will be the first large-scale and long-running production at the Transfer of Rights area. The Transfer of Rights is an assignment agreement between Petrobras and the federal government regarding a set of Santos basin presalt areas and fields.

The production system includes the FPSODynamic Producer, which is connected to well 2-ANP-1-RJS. This early system will enable the company to produce for a six-month period and gather data to enhance the field's first permanent production system using platformP-74, which is in the final phase of conversion at the Inhaúma shipyard in Rio de Janeiro. Búzios field is 200 km (124 mi) off the coast of Rio de Janeiro, at water depths from 1,600 to 2,100 m (5,249 to 6,890 ft).

Statoil and partner Sinochem have submitted to the National Agency of Petroleum, Natural Gas and Biofuels (ANP) the plan of development forPeregrino Phase 2. The $3.5-billion project entails a new wellhead platform and drilling rig (Platform C) and adds about 250 MMboe to the Campos basin field.

The current solution consists of a wellhead platform with a drilling unit tied-back to the existing FPSO Peregrino. Phase 2 will increase the number of production wells from Peregrino Southwest, which is not reachable by platforms A and B. Production is expected to start toward the end of the decade. •