Arctic E&P activity on the rise

The potential of the offshore Arctic oil and gas market is substantial. While energy analyst Infield Systems suggests the region holds 136.6 Bboe in discovered offshore reserves, a United States Geological Survey report claims there could be another 346 Bboe left undiscovered. 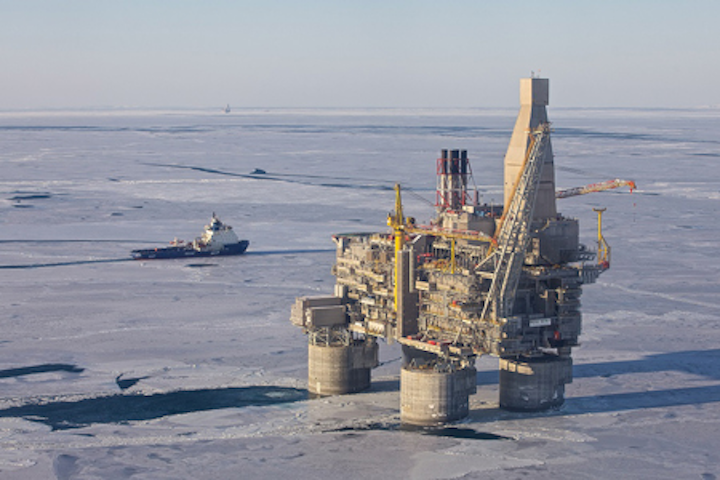 The potential of the offshore Arctic oil and gas market is substantial. While energy analyst Infield Systems suggests the region holds 136.6 Bboe in discovered offshore reserves, a United States Geological Survey report claims there could be another 346 Bboe left undiscovered.

Despite the environmental, regulatory, and technological challenges, operators continue to invest in and ramp up exploration, development, and production operations across this frontier region.

A recent study by the National Petroleum Council pointed out that in order to keep domestic production high and imports low, oil companies should start probing the Arctic now because it takes 10 to 30 years of preparation and drilling to bring oil to market. The council, made up of energy company executives, government officials, analysis firms, and nonprofit organizations, says the technology and techniques needed to operate in the region are available and the industry can safely operate there. The report contends the industry has developed and improved equipment and procedures to prevent a spill and clean up quickly if one occurs.

Royal Dutch Shell is moving the drilling rigsNoble Discoverer and Polar Pioneer to Alaska ahead of a possible resumption of drilling. This comes two years after the Shell-contracted Kulluk conical drilling rig broke free and ran aground off Sitkalidak Island, Alaska.

Eni has achieved the production goal of 25,000 boe/d at the Nikaitchuq field offshore the North Slope of Alaska. In a water depth of 3 m (10 ft), the field holds reserves estimated at 200 MMboe. Production, which began in January 2011, is the first operated by Eni in the Arctic.

Development includes the drilling of wells and the construction of facilities both on land and on an artificial island built by the company in the Beaufort Sea. The location's climate and environmental constraints required Eni to drill multi-lateral horizontal wells. According to the company, the Nikaitchuq horizontal wells are the most complex wells drilled by the industry to date in Alaska, with a lateral displacement that extends up to 22,000 ft (6,706 m).

At North Amethyst, a well targeting the deeper Hibernia formation beneath the main field is expected to come online in 3Q 2015.

Suncor Energy says water injection started late last year at the Hibernia South Extension Unit project. Production is expected to ramp up during the second half of 2015.

However, the partners in the West White Rose Extension project have agreed to defer a project sanction decision in light of the current lower crude price.

Construction continues on the gravity-based structure and topsides for the ExxonMobil-operated Hebron field off Newfoundland and Labrador. Suncor anticipates first oil in 2017.

ExxonMobil has started light oil production from the Sakhalin-1 project's Arkutun-Dagi field offshore eastern Russia. Located 25 km (16 mi) off the northeast coast of Sakhalin Island, this is the last of the three fields to be developed in the concession. The other two fields - Chayvo and Odoptu - began production in 2005 and 2010, respectively.

Peak production from the giant Berkut platform is expected to reach 90,000 b/d and increase output from Sakhalin-1 to more than 200,000 b/d. Production from Sakhalin-1's Arkutun-Dagi field will be routed through the Chayvo onshore processing facility on Sakhalin Island and delivered through pipelines to the De-Kastri oil export terminal in Khabarovsk Krai, Russia.

Rosneft and partner ExxonMobil have discovered oil, gas, and condensate with the first-ever exploration well in the Kara Sea offshore northern Russia.

The semisubmersibleWest Alpha drilled the Universitetskaya-1 discovery well in 81 m (266 ft) of water in the East-Prinovozemelskiy-1 license, 250 km (155 mi) from the Russian mainland, reaching a subsurface depth of 2,113 m (6,932 ft). Rosneft proposed naming the field Pobeda. The TomskNIPIneft Institute estimates resources from the discovery at 391.9 bcm (10 tcf) of gas and 128.7 MM tons of oil. However, ExxonMobil left the project following US Treasury Department sanctions against cooperating with Russia on Arctic exploration.

Gazprom Neft subsidiary Gazpromneft Sakhalin has received subsoil-use rights to two license blocks in the Russian Arctic. The Severo-Zapadniy (northeast) block is on the Pechora Sea shelf, and the Heysovskiy block is on the Barents Sea continental shelf.•