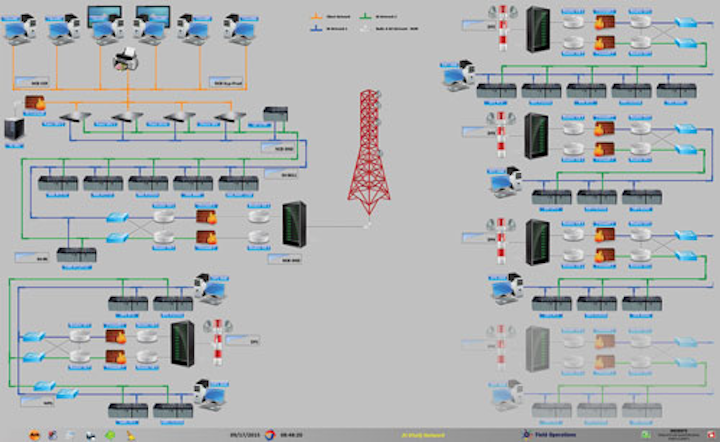 Al Khalij has been developed through a cluster of seven unmanned platforms linked by a network of subsea pipelines. All share the same design model, comprising a process control system to manage production and a fire and gas system/emergency shutdown (FGS/ESD) controller to manage safety.

Around 25,000 b/d of oil is piped 40 km (25 mi) to the island of Halul for processing by two separation trains. At the Halul Island oil terminal, operated by Qatar Petroleum, two PCSs manage production for two trains, respectively. In addition, there is a controller to manage the burner management systems for both trains and an FGS/ESD controller to manage safety.

Communication between Halul Island and the platforms as well as between the platforms is via a redundant telecoms network. Total wanted to investigate the possibility of replacing the current integrated control and safety system with a view to improving the performance of its installations. The replacement control system had to meet the company’s general specifications as well as the constraints of the Al Khalij site.

Codra’s Panorama E2 system complied with the roughly 40 criteria listed in the call for tender. Development was assigned to Snef.

Total did not opt for a distributed control system for this project. The changes to the existing system would have had a considerable impact on cost. Panorama met not only the technical criteria but also the financial constraints and avoided the need for shutting down production on switchover.

Operations at Al Khalij started in 1997; Total decided to embark on a new 25-year period of activity in late-2012. The environmental conditions are difficult for both the operators and the machines: The temperature in Qatar varies between 40°C - 50°C (104°F - 122°F) in the summer, with humidity levels exceeding 90% offshore. All the platforms are self-operating and produce continuously, and all are managed from the control room on Halul Island.

In the control room, which operates round the clock, the Panorama system was designed to manage several different systems, including the offshore production units (oil wells, water treatment and injection system); two separation trains on the island; fire and gas detection and safety systems; data collection; interfacing with the OSIsoft PI system; and reporting and traceability.

Snef’s work on the project was monitored by a Total engineer, with technical support provided by Codra’s engineers. In May 2012, the company achieved the first milestone, developing all the components in compliance with Total’s specifications. Using object-oriented programming, it created the iconography as well as all the animation principles.

Once Total in Qatar had accepted the proposal, the project team moved on to the second phase – designing the system for one separation train and one platform, before proceeding to do so for all the platforms based on the specific data from each PLC. The application was developed using version four of Panorama and then migrated to version five, leading to improved performance. The switchover from the old system to Panorama took place over five weeks with no interruption to production.

Several days of technical support were allowed for in the project scope. A Panorama specialist was on hand throughout the entirety of the project. The same specialist later transferred to Qatar to deal with any issues that arose during start-up

Snef Technologies is responsible for site maintenance and provides technical support to the control room operators. Total’s methods engineer was trained on the system at Codra’s head office and can manage day-to-day development of the application independently. The system was designed such that new equipment could be added, so Panorama will be able to handle any future expansion of the oil field. •