In mid-September, the world's first subsea compression station began operating at the Asgard production complex in the Norwegian Sea. 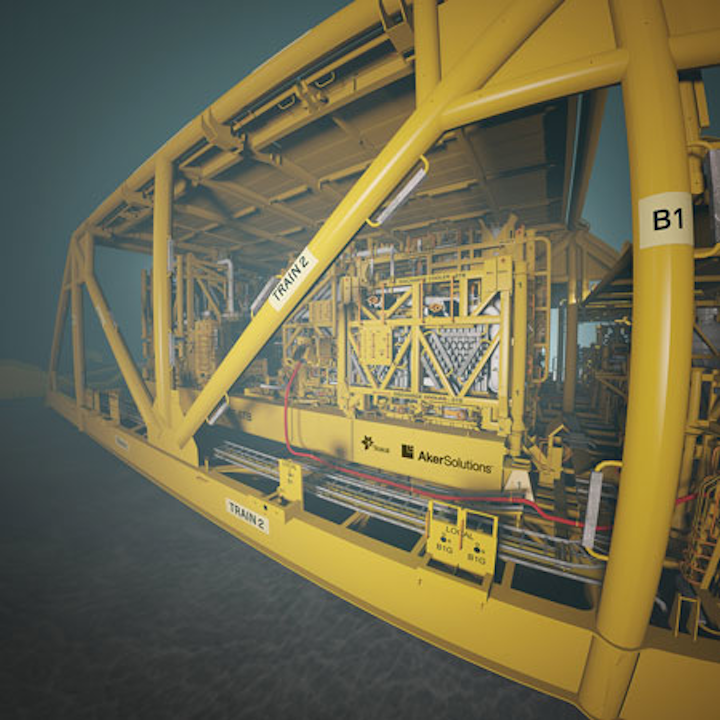 In mid-September, the world’s first subsea compression station began operating at the Åsgard production complex in the Norwegian Sea. The technology is designed to boost pressure at the Midgard and Mikkel fields that export gas and condensate to the Åsgard B semisubmersible processing platform nearly 40 km (25 mi) away. In the process, Statoil expects to extend the fields’ lives out to 2032, thereby extracting a further 306 MMboe of production.

According to a paper presented by Statoil’s Simon Davies and Rune Mode Ramberg at DOT in Houston in October, the industry began working on developing subsea compression technology in the late 1980s. Gas production through Åsgard B started in late 2000, although Statoil and its partners were aware from the outset that compression would be needed at some point to counter declining pressure at Midgard and Mikkel. Lack of available space on Åsgard B meant the only alternative would have been adding a much costlier, dedicated compression platform.

Work on qualifying the components needed for subsea compression started in 2005, and during 2007-13, Statoil and its team of equipment suppliers implemented a program for testing and qualifying nearly 50 components divided into three main categories: process modules, power system and control system. Testing of the prototype compressor began at Statoil’s K-lab facility near Stavanger in 2008 with a series of endurance trials, some with different quantities of liquids. Between 2008 and 2013 the compressor and motor rating was increased from 8 MW to 11.5 MW, with verification testing conducted of the 11.5-MW compressor design from 2012.

During 2011-13, K-lab was upgraded to include a shallow-water test pit for testing of a complete compressor module, with one of the compressor units undergoing successful submerged testing in 2014. Further tests were performed at the facility on the motor and topside variable-speed drive using a cable simulator to confirm electrical stability over the long step-out for a range of operating conditions.

In March 2012, Statoil and partners Eni, ExxonMobil, Petoro, and Statoil got the go-ahead from Norway’s Parliament to proceed with the full-scale development, which would involve installation of a two-train subsea compression station in 300 m (984 ft) of water. Each train would comprise a scrubber, a condensate pump, and a compressor with an inlet and outlet cooler. The focus was on a compact design, with motor and compressor housed in the same casing, and with cooling of the motor achieved using the process gas.

MAN Diesel and Turbo, also involved in the qualification program, designed and manufactured the HOFIM motor-compressors for integration into the compression station provided by the main equipment contractor Aker Solutions. The four HOFIM units, adapted for harsh subsea conditions, are hermetically sealed and remotely controlled, with casings designed to withstand 220 bar (3,191 psi) pressure, and a 7-axes active magnetic bearing system integrated inside the casings to prevent gas leakage. According SKF, supplier of the magnetic bearings, these are designed to simplify the system by removing the need for components such as lubricating oil, seals and gearbox. In addition, the bearings are friction-less, leading to higher rotation speeds, which in turn allows use of smaller compressor modules.

Power for the subsea station is supplied from the Åsgard A production ship. Under a separate contract, Aker Solutions built a 900-ton power/control module for installation on the vessel, with ABB providing the associated drives and transformer (the total installed power system, according to analyst ScanBoss, is around 25 MW), and Apply Sørco performing the topsides modifications. Each of the trains is supplied with power via an umbilical, manufactured by Nexans, with Deutsch, Expro and GE providing the high-voltage subsea connectors and Schneider Electric the subsea control power distribution unit. MPM manufactured the subsea wet gas meters.

Well stream from the three Midgard subsea templates, one of which also receives Mikkel’s production, enters the compression station via a 900-ton manifold. This arrangement necessitated reconfiguration offshore of the flowlines between the two fields: Technip handled this assignment, also installing the umbilicals and power cables. In 2013, Technip’s subsea construction vesselNorth Sea Giantinstalled 12 pipeline end manifolds and a riser base, both fabricated by Rosenborg Worley Parsons.

In July the same year, Saipem’s crane barge installed the 1,800-ton compressor station template and manifold station, both built by Aker in Egersund, at the Midgard location, and also the topsides power/control module. The 20 modules for the compressor station underwent a system integration test at Egersund in mid-2014 and were installed offshore byNorth Sea Giant during April to September this year. The vessel performed nine trips to install all 20 modules, most including installation of one large module such as a compressor, scrubber or outlet cooler. These were lowered over the side of the vessel using a specially designed handling system, which included a 420-metric ton (463-ton) crane and guide frame equipment, to allow installation through the splash zone in significant wave heights of up to 4.5 m (14.7 ft).

Each complete train, weighing 1,500 tons in total, is secured to a 400-ton base frame. In 2013, Allseas’Lorelaylaid the new 37-km (23-mi), 20-in. pipeline that runs from the compression station to the Åsgard B gas platform. One of the existing Midgard/Mikkel export pipelines has been retained - this is connected to another line from the compression station via a hot tap connection, performed by Technip’sSkandi Arcticvessel.