Delta House FPS is a first of its kind 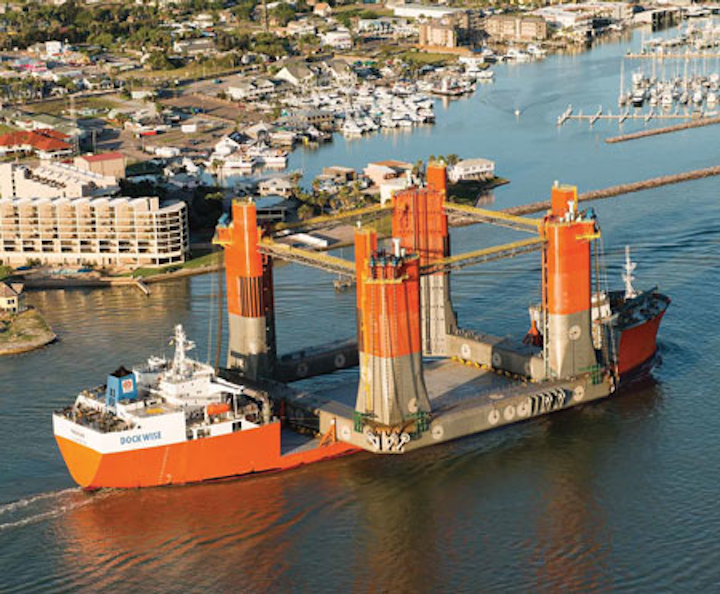 Heralded as one of the most efficient production systems in the Gulf of Mexico, the Delta House development taps three Mississippi Canyon fields where the average water depth is around 4,500 ft (1,372 m) and reservoirs range from 12,000 to 18,500 ft (3,658 to 5,486 m). From fasttrack development to inking a significant deal to fund the host platform to being privately-owned, Delta House’s development is a game changer in the deepwater sector of the oil and gas industry.

When LLOG initially planned the development of the area, it knew that the Delta House FPS would serve as a host facility for future fields, with at least four fields tying into the platform. Designed for 25 years of continuous production, the facility initially called for seven wells to connect followed by seven additional wells as exploration activity continued.

It is considered a water independent, semisubmersible floating production system (FPS) with a production handling capacity of 100,000 b/d of oil, 240 MMcf/d of gas, and 40,000 b/d of water.

LLOG Exploration, both operator and partial owner of the facility, commenced production in the second quarter of this year.

LLOG had less than 36 months to drill wells in the Mississippi Canyon lease before it expired. The partnership was granted a “Suspensions of Operation,” which granted the consortium a one-time ‘presidential lease’ “Suspension of Operations” due to the drilling moratorium that was enacted because of the Macondo incident. This period gave the partners time to study the leases and then commence drilling.

“We were very transparent in our presentations to the BSEE, and since then, we’ve done everything we said we were going to do,” said Mike Altobelli, LLOG vice president, land, in a Delta House supplement,A New Hub in Mississippi Canyon. “It was a pretty dynamic time. I’ve never been involved in a project with that much going on in such a condensed period of time. The lease expiration dates were staring us in the face. We had to get out there and drill wells.”

Once drilling started, two discoveries were made, allowing for development of the project to begin. With financing secured through an investment group and due to the financing terms in the contract, it paved the way for the project to be sanctioned sooner rather than later, cutting the development time of the entire project by around two years.

The original plan for development called for at least three deepwater wells, plus the infrastructure to connect them to the FPS. That plan grew to include seven wells during the startup period for a total investment of $1.2 billion. Oil from Delta House flows through some 35 mi (56 km) of newly-constructed 12-in. pipe that connects to the Shell-operated Odyssey oil pipeline. Gas from Delta House is delivered through 31 mi (50 km) of new 16-in. line that links the FPS to the BP Pipelines-operated Destin Pipeline Co.’s 24-in. gas pipeline.

While the second exploration well was being drilled on the Who Dat field, which is a part of the Delta House project, LLOG’s development team was beginning to order the subsea infrastructure. Nine trees, along with the wellheads, casing and downhole systems were planned for its development long before it was needed in the field, according to the exploration company. The team was sure it could use the ordered equipment for Delta House, mainly because the company has standardized its wells, it said. Most of the company’s deepwater developments use the same horizontal trees, and any that were not needed for Delta House could be used for other developments. The company also has standardized its subsea manifolds, LLOG added, so if the development calls for more than four wells, a second manifold can be bolted to the first.

By the end of 2014, six of the proposed 14 Delta House wells had been drilled. Of the first six wells, two were drilled by theEnsco 8502 in 2012-2013, and two were drilled by the Noble Amos Runner in 2011-2012. The Ensco8503 drilled the sixth well in late 2014, followed by the initial two subsea completions for the field. The Sevan Louisiana then drilled wells 7, 8 and 9 in 2015, followed by Seadrill’s West Neptune that completed the remaining wells in the field.

As for the Delta House FPS, it is designed and customized to LLOG specifications, in a first in what the company envisioned as a series of floating production systems all with the same basic Delta House plan.

The four-column semisubmersible floating production system, based on Exmar’s Opti-Ex hull design is similar to LLOG’s successful Who Dat platform but 40% larger. The hull is optimized to increase the amount of payload it can carry relative to the weight of the steel in its hull. Considered lighter and more buoyant than most conventional four-column hulls, due to the columns being square on the other corners where structural loads are the greatest, saves steel, the company added. With the risers attaching to the FPS, it provides another weight saving feature.

“The way the hull is designed, we swap off risers for ballast,” said Craig Mullet, project manager for the hull and topsides. “If we tension the risers at the top of the hull, we sacrifice weight capacity. By fastening our risers to the bottom of the hull instead, we save the weight.”

By October 2014, the FPS was moored. Once ballasted down to working depth, the underside of the main deck was 72 ft (22 m) above the water line, with 98 ft (30 m) of the hull below the waves. Production commenced shortly after.