The Arctic is increasingly important in securing energy supplies for the future, notwithstanding the economic, environmental, and social challenge. Finding and extracting oil and gas in the Arctic and Subarctic regions is itself challenging due to extreme temperatures, ice conditions, remoteness and a sensitive natural environment. 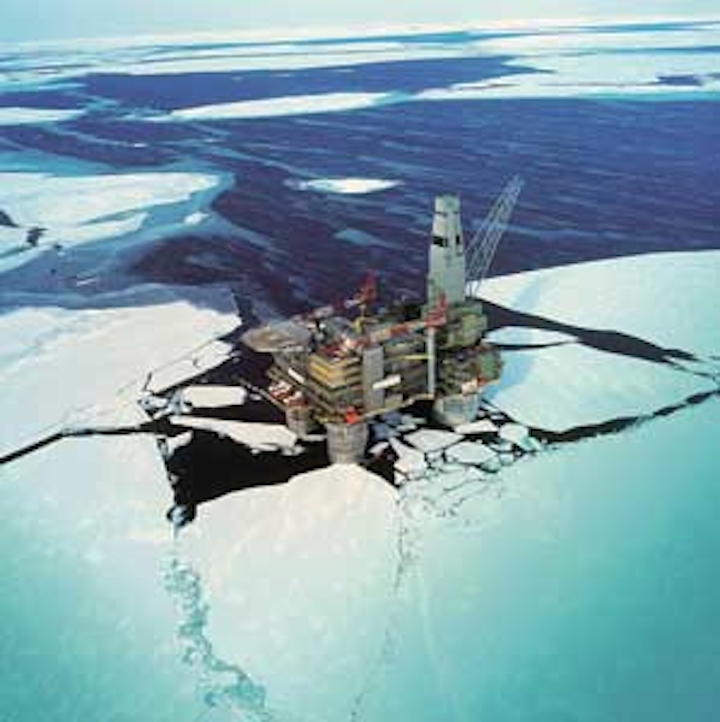 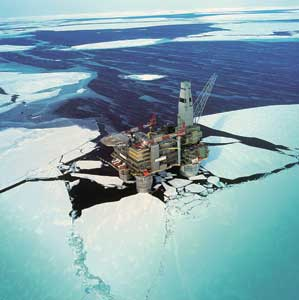 TheArctic is increasingly important in securing energy supplies for the future, notwithstanding the economic, environmental, and social challenge. Finding and extracting oil and gas in the Arctic and subarctic regions is itself challenging due to extreme temperatures, ice conditions, remoteness, and a sensitive natural environment.

Arctic developments are typically extensive developments in remote areas lacking infrastructure, so concrete substructures are favored. There are five concrete substructures installed in ice-infested areas offshore Sakhalin Island inRussia, the Hibernia platform on Grand Banks offshore Canada, and the Hebron gravity based structure (GBS) under construction. In addition to the concrete platforms there are some steel structures installed offshore Sakhalin, in the Pechora Sea, and in the Cook Inlet. Most of these are GBS.

The substructures delivered for platforms in arctic conditions typically have the following functional requirements protected inside the substructure:

The following outlines some of the key conditions that need to be considered.

Site conditions. The arctic arena covers a vast area with a variety of site conditions. The Arctic is considered by some to be the area north of the polar circle, 67° north. The offshore industry also tends to include all areas that are covered with ice for significant parts of the year. Exploration drilling has taken place in the ice-free period and in areas that are ice free for more than three months in the summer season. These are the areas where production facilities will be in demand in the foreseeable future.

Ice conditions. The areas of most interest for the offshore industry are those exposed only to first-year ice. The areas offshore Sakhalin Island have the most arctic developments so far. The seas in these areas are ice covered some six months of the year by level ice that grows to a thickness of about 1.5 m (5 ft). Global design loads on the platforms are in the order of 200 MN (meganewtons) to 400 MN.

The areas north of Russia and Alaska/Canada are ice covered as much as nine to 10 months of the year and the ice thickness grows to as much as 2 m (6.5 ft). Additional ice features are ridges and stamucas (stranded/grounded ice feature composed of broken ice pieces or rubble). The Grand Banks and the Baffin Bay are prone to icebergs of as much as 10 million metric tons as well as level ice in the Baffin Bay for more than six months of the year.

The true arctic areas farther from land and along eastern Greenland are also exposed to multi-year ice. Multi-year ice is significantly stronger and thicker than first-year ice, and thus more difficult to design for.

Wave conditions. Waves are the dominate metocean feature in the arctic during ice-free periods. Significant wave heights of 7 m to 10 m (23 ft to 33 ft) are used in design for most of these arctic areas. For the Barents Sea design wave is up to Hs= 15 m (49 ft). There often is uncertainty regarding ice loads and methods of calculation, but wave loads also can govern parts of a substructure design.

Seismic conditions. The seas east of Sakhalin Island are the arctic offshore areas most heavily exposed to seismic activity. Some other areas north of Russia are also exposed to significant seismic activity. This governs parts of substructure design. Seismic isolators are frequently used to reduce the seismic impact on the topside facilities in these areas.

Weather conditions. Weather is dominated by low temperatures that affect topside facilities, the working environment for the crew and equipment, and also the choice of steel materials in substructures.

The combination of cold water, ice, and the occasional warmer air is likely to generate fog. Precipitation varies across the Arctic.

Wind, combined with low temperature, adds to the challenging working environment and increases energy consumption. Polar lows are hard to forecast and have main influence on the marine operations during platform installation and maintenance as well as drilling.

Soil conditions. The soil conditions are important for fixed platforms, in particular for GBSs which are secured on the ground through the on-bottom weight. Soil conditions are expected to be poor in arctic areas due to discharges of large quantities sediments from the rivers like Ob, Yenisey, Lena, and MacKensey in Alaska, Canada, and Russia. The soil conditions in other basins like the Sea of Okhotsk and the Grand Banks are different and firmer. Soils in areas like the Baffin Bay are unknown factors, but the more shallow parts may have been consolidated by recent ice ages, and are unlikely to have collected significant sediments since then.

The type of GBS substructures developed and built for offshore Sakhalin and the Grand Banks might be extended to meet the increased ice loads in new, more exposed, and remote arctic areas north of Russia and Alaska, and the Baffin Bay. Further development is required to meet these more challenging conditions. Areas for development include:

The GBS should be sized to carry the topside facility to the offshore location. This requires more buoyancy and stability afloat to be designed into the GBS. This requires larger GBS volume which increases the wave and ice loads. This increased volume does however create a possible place for oil storage which captures another desired feature. The challenge is to transfer the horizontal environmental load into the weak seabed.

Since ice loads attack close to the water line, a small area exposed to the ice is preferred. In such a design, the volume of the structure is placed farther down toward the seabed. This is more achievable in deeper water, where the extreme ice keel cannot hit the underwater parts of the structure. Additional methods that can contribute in load transfer are:

Iceberg loads can be handled in different ways. The Hibernia GBS has a caisson top above the water surface, and resists iceberg hits all along the caisson height. Recent iceberg resistant GBSs are stepped so larger icebergs hit the lower caisson to reduce the overturning moment. Smaller icebergs are allowed to hit the shaft.

Concrete is favored in the substructure because it has good strength and maintains that strength at low temperatures. Concrete has good insulating properties compared to steel. This helps reduce thermal loss from the upper part of the structure where some outfitting is likely to be placed. Material testing shows that high-quality concrete has good abrasion resistance. Concrete has a larger mass and more damping than other materials resulting in less noticeable vibrations.

The arctic platforms constructed so far for the "shallow" waters offshore Sakhalin have been executed along the following principles:

The Hibernia and Hebron (under construction) GBSs followed a different approach. The lower part of the GBS was constructed in a dry dock and then towed to a sheltered deepwater construction site where the GBS was completed. If additional weight (solid ballast) is required, it can be placed at this time. The topside was assembled nearby and installed on the floating GBS by a catamaran-type mating, then interconnected, hooked-up, and precommissioned before tow and installation.

This strategy requires a larger GBS structures since it is also designed with sufficient buoyancy to carry the topsides, but the design offers less costly and less weather dependent offshore work. The larger buoyancy is then used for oil storage to provide an export solution. Both of these features may be beneficial for remote arctic developments – installing a completed unit offshore that also provides an export solution.

Future development of GBS solutions, in particular for the high and remote Arctic, are likely to involve solutions that can be completed and tested at the fabrication and construction locations, then towed to the installation site, thus minimizing offshore work.

In summary, the following conclusions can be drawn when thinking about the challenges that fixed platforms face in ice-infested waters:

This article is based on a paper presented by the authors at the Arctic Technology Conference in Houston, Feb. 10-12, 2014.