National oil companies have launched a series of large-scale projects offshore the Arabian Peninsula, mainly concentrated around the UAE. 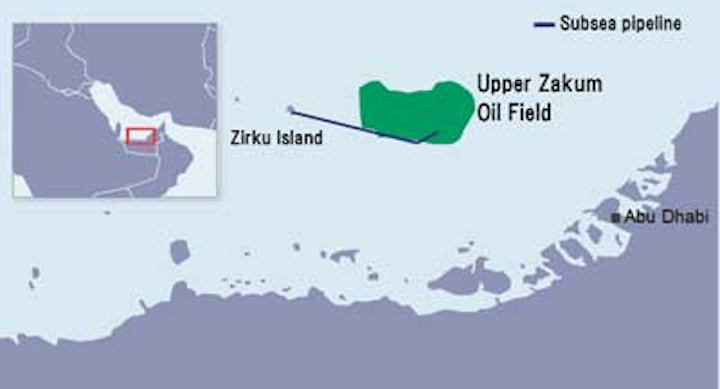 National oil companies have launched a series of large-scale projects offshore the Arabian Peninsula, mainly concentrated around the UAE.

Redevelopment continues of Upper Zakum, 80 km (49.7 mi) offshore Abu Dhabi. The 1,150-sq km (444-sq mi) oilfield is one of the world's largest. Oil from Upper Zakum and the Umm al Dalkh and Satah fields is pumped via main islands to Zirku Island 137 km (85 mi) offshore for processing, storage, and export. ADNOC operates in partnership with ExxonMobil and Japan Oil Development Co. According to INPEX, Japan Oil Development's parent company, production is currently at around 650,000 b/d and should reach 750,000 b/d next year. Abu Dhabi's government recently approved a 15-year extension for the concession through 2041, and the partners are looking to raise production capacity to 1 MMb/d.

The present redevelopment involves the addition of 25 wellhead platforms and hundreds of kilometers of flowlines, as well as major upgrades of the central processing platform and satellite facilities. Additionally, the partners are drilling extended reach wells from artificial islands, drawing on ExxonMobil's achievements with record-length ER wells drilled from Sakhalin Island off easternRussia. They are also implementing maximum reservoir contact technology, new to the Middle East, to reduce well numbers and unlock tighter areas in the Upper Zakum reservoir.

Elsewhere in the UAE, Dubai Petroleum Establishment contracted Technip to build and install a new 1,400-ton platform and 110 km (68 mi) of pipelines for the Jalilah B field, 90 km (56 mi) offshore Dubai. Technip was due to deploy one of its flagship S-lay vessels,G1201, for laying the pipes in shallow and deepwater this year. Privately-owned UAE company Dana Gas has finally started developing the Zora gasfield, discovered in 1979 in Sharjah/Ajman territorial waters. The company has commissioned a fixed wellhead platform with lateral wells, with the gas to be piped ashore for processing.

McDermott, one of Saudi Aramco's main fabricators, will lay two 20-km (12.4-mi), 230-kV subsea power cables for the NOC. The cables will be among the largest and heaviest ever transported and installed off the Arabian Peninsula, the contractor claims.

Doha-based drilling contractor Gulf Drilling International (GDI) has signed several contracts over the past few months with Occidental and Maersk Drilling for continued supply of jackups for development programs. Another GDI jackup,Al Khor, is due to drill the JXQA-1 exploratory well this year for operator JX Nippon in Qatar's offshore block A (pre-Khuff).

Masirah Oil achieved a notable breakthrough earlier this year by discovering oil in block 50 offshore Oman, the first find off the country's eastern shore after more than 30 years of exploration. The well flowed up to 3,000 b/d of light oil on test.

Last month, Lebanon's Ministry of Energy and Water was due to close bids for the country's first offshore licensing round, with five blocks available. Twelve of the applicants were pre-qualified as right-holders operators. Despite ongoing civil conflict, neighboring Syria has signed an agreement for its ally Russia to explore its offshore territory, while to the south, Noble Energy and its partners proved further gas close to the deepwater Tamar facilities with the Tamar SW well.

In theCaspian Sea, BP and its partners have issued major contracts for the Stage 2 development of the Shah Deniz gas field offshore Azerbaijan. The $28-billion initiative calls for two new bridge-linked platforms, 500 km (310 mi) of flowlines connecting 10 subsea manifolds, and 26 new subsea wells. New pipelines will carry the gas across Turkey, southeast Europe and under the Adriatic Sea, terminating at a landfall in eastern Italy.

The main Shah Deniz reservoir is around 6,000 m (19,685 ft) below mean sea level and has one of the highest reservoir pressures anywhere in the world, according to BP. To safeguard production facilities, the partners have commissioned a high integrity pressure protection (HIPPS) system. Another issue is the water depth of over 500 m (1,640 ft), which results in high ambient pressure and temperatures of around 5°C. Nexen will supply a direct electrical heating system to prevent hydrates from forming in the pipelines during shutdown periods. Later on in the field's life, the partners may also consider adding subsea compression to enhance recovery by overcoming back-pressure on the production wells.