The Gulf of Mexico remains one of the leading offshore oil and gas provinces, and upstream activity is being driven this year by a number of new discoveries, several feld development projects, and enhanced production from new and existing felds. 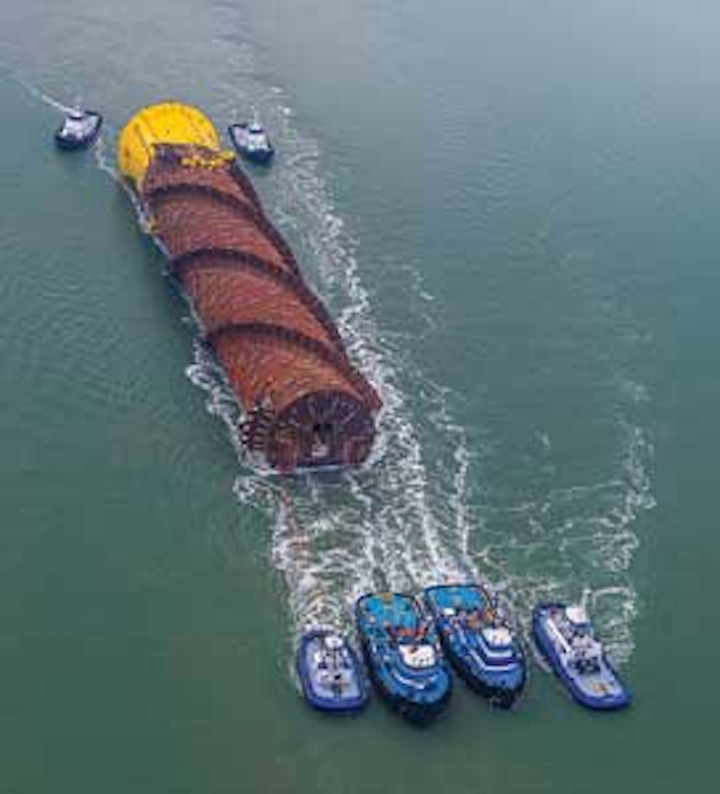 TheGulf of Mexico remains one of the leading offshore oil and gas provinces, and upstream activity is being driven this year by a number of new discoveries, several field developments, and enhanced production from new and existing fields.

Notable among recent discoveries are Stone Energy's finds at its deepwater Amethyst and deep-gas Tomcat prospects. The company operates and owns a 100% working interest in both discoveries. The deepwater Amethyst exploration well in Mississippi Canyon block 26 encountered about 90 ft (27 m) of net hydrocarbon pay in one interval, which suggests a commercial discovery. Analysis of logging, coring, and fluid data confirmed the existence of natural gas, condensate, and natural gas liquids in the pay zone. The interval has been placed safely behind pipe for a future completion. A single or multi-well tieback to its 100% owned Pompano platform, located less than 5 mi (8 km) from the discovery, is a likely development option.

The results at the deep-gas Tomcat exploration prospect at West Cameron block 76 also suggest a commercial discovery with about 30 ft (9 m) of net hydrocarbon pay in the Camerina interval. Initial development plans call for a tieback to a nearby Stone-operated production platform in East Cameron block 64. Production is estimated to start in the second half of 2014.

Elsewhere in thedeepwater Gulf, Noble Energy has made a discovery at its Dantzler exploration well located in Mississippi Canyon 782. Wireline logging data indicate that the well has encountered over 120 net ft (37 net m) of primarily crude oil pay in two high-quality Miocene reservoirs. The discovery well was drilled to TD of 19,234 ft (5,863 m) in 6,580 ft (2,006 m) of water. Dantzler is located 12 mi (19 km) west of the company's Rio Grande development, and discovered gross resources at Dantzler are now estimated at 55 to 95 MMboe. Noble says it will drill at least two additional Miocene trend prospects in 2014.

Meanwhile, Chevron's Jack/St. Malo semisubmersible floating production facility has been moored in the deepwater Gulf. Scheduled to begin producing oil and natural gas later this year, the facility will have a capacity of 170,000 b/d and 42.5 MMcf/d (1.2 MMcm/d) of natural gas. Jack/St. Malo will act as a hub for the 43 subsea wells, including pumps and other equipment on the seafloor.

Shell has started producing from the Mars B platform in the deepwater Gulf. Production is going through the Olympus installation, making this the first deepwater GoM project to expand an existing oil and gas field with significant new infrastructure. Shell says this should extend the life of the greater Mars basin production to 2050 or beyond. When added to future Olympus production, the original Mars platform is expected to deliver a total of 1 Bboe.

The Mars B development includes subsea wells at the West Boreas and South Deimos fields, export pipelines, and a shallow-water platform at West Delta 143. Olympus is in approximately 945 m (3,100 ft) of water. Using the Olympus platform drilling rig and a floating drill rig, additional development drilling will enable ramp up to an estimated peak of 100,000 boe/d in 2016. Mars field produced an average of over 60,000 boe/d in 2013.

Meanwhile, Petrobras continues to boost production at its Cascade-Chinook development. The company recently announced that it had set a new production record of 40,000 b/d of oil by bringing onstream two new wells, Chinook-5 and Cascade-6, contributing a further 28,000 b/d to the previous output of 12,000 b/d. Cascade and Chinook are located 260 km (162 mi) south of the Louisiana coast and are 24 km (15 mi) apart, at a water depth of 2,500 m (8,202 ft).

Elsewhere, BP says it has started oil production from Na Kika Phase 3 in the deepwater Gulf of Mexico. The first Na Kika Phase 3 well began production in February, with a second well expected to start up in 2Q 2014. The project includes the drilling and completion of the two new wells, the addition of subsea infrastructure to tieback to the Na Kika platform, and new equipment to allow increased production from an existing well at the site.

The Na Kika semisubmersible platform is located about 140 mi (225 km) southeast of New Orleans in more than 6,000 ft (1,829 m) of water. It will use available production capacity at the Na Kika hub.