Over the last few years, the Caspian Sea littoral states, former republics of the Soviet Union, have considerably intensified their work on the Caspian shelf. For some, these resources are the basis of national well-being and help meet their budget needs. For others, Caspian Sea development provides a welcome addition to oil and gas supplies as development of conventional fields becomes more complicated and less fruitful. 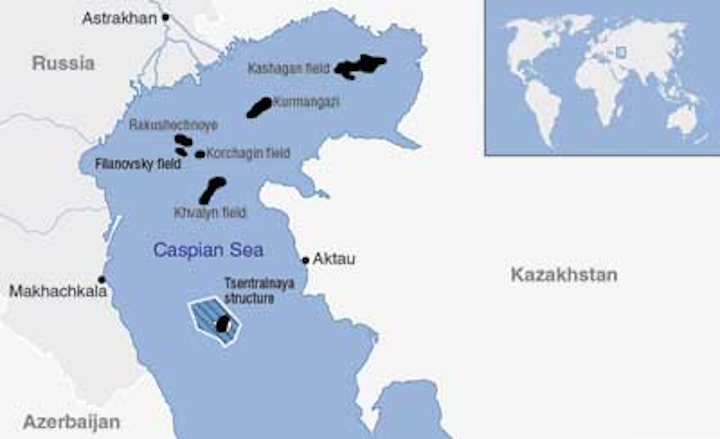 Over the last few years, the Caspian Sea littoral states, former republics of the Soviet Union, have considerably intensified their work on the Caspian shelf. For some, these resources are the basis of national well-being and help meet their budget needs. For others, Caspian Sea development provides a welcome addition to oil and gas supplies as development of conventional fields becomes more complicated and less fruitful.

The development of the Caspian Sea shelf varies from country to country, with varying levels of successes and difficulty. For instance, Azerbaijan is facing declining recovery rates in its strategic fields of Azeri, Chirag, and Guneshli; investors have left several projects in Kazakhstan; Turkmenistan is contracting works for new blocks; and Russia is intensifying its prospecting and recovery efforts in its own sector. So far, only Russia and Kazakhstan have made sufficiently serious progress in joint development of the shelf at interstate level.

It should be mentioned that the Caspian Sea region has long been (and still is) subject to a number of territorial disputes, and a number of these have still not been completely settled. Many of these disputes are related in particular to oil and gas resources.

The process of distributing the fields of activity has been long and complicated, and at present the disputes between the countries have been partially settled by several treaties. In 1998, Russia and Kazakhstan entered into an agreement on the distribution of the northern part of the Caspian Sea, and the protocol to the agreement was signed in 2002. The agreement between Russia and Azerbaijan on the distribution of the adjacent plots of the northern part of the Caspian Sea was entered into in 2002. A trilateral agreement between Russia, Azerbaijan, and Kazakhstan on the junction point of the lines distributing the adjacent plots of the Caspian Sea was signed in 2003. In October 2007, at the summit of the five Caspian littoral states held in Tehran, the Declaration on the future convention of the Caspian status was signed. The convention agreements were expected to be signed in 2014, but this had yet to take place as of press time.

Meanwhile, for all of those years, the Caspian littoral states of the former USSR have been developing their own shelf plots.

In the Russian sector, the most active developer of the Caspian shelf fields has been the company LUKOIL, with seven fields opened since 1995 (Filanovsky, Korchagin, Rakushechnoye, Sarmatskoye, "170th km," Hazri, and Yuzhnaya) with the total reserves or approximately 1 billion metric tons of equivalent fuel.

LUKOIL launched the Korchagin field into commercial operation in 2010. That is a gas-and-oil-deposit with an oil rim. After supplementary exploration, the estimate of its reserves increased from 30 million to 50 million metric tons of oil and 63.3 billion cubic meters of gas.

Around 2.5 million metric tons of oil and 1 billion cubic meters of gas are expected to be recovered here at the peak per year. An offshore ice-resistant fixed platform with drilling facilities has been erected on the field.

LUKOIL is about to put into operation its second Caspian field named after Filanovsky with reserves of more than 150 million metric tons of oil. This field is the core oil asset of the company in the Caspian Sea. While other fields have huge gas reserves, the oil content of the Filanovsky field is up to 75%.

Initially, LUKOIL was planning to put theFilanovsky field into operation in 2012, but the deadlines were shifted afterwards. The oil company has finished installation of the FPU platform jackets, main underwater oil and gas pipelines, and the inter-field pipelines connecting the Filanovsky and Korchagin fields have been built. The exploitation of the field should start in late 2015/early 2016. 10 million metric tons of oil and 1.4 billion cubic meters of gas per year should be recovered in this field. The investments made in the Filanovsky field development are estimated to cost around $6 billion.

After Filanovsky, the company has turned to the Sarmatskoye field, which is scheduled to placed in operation in 2017. It will be followed by the development of the Rakushechnoye and other fields. By 2020, LUKOIL's annual Caspian oil recovery is expected to be 9.5 million metric tons and gas recovery 9 billion cubic meters.

The Centralnoye field, with extractable reserves of more than 100 million metric tons of oil and 162 billion cubic meters of gas is partially located in the Kazakhstan part of the Caspian Sea.

The field was discovered in 2008. Initially, the exploratory drilling there was performed by a Russian company CentrKaspneftgaz, established by LUKOIL on a par with Gazprom. One well was drilled in the licensed plot. Yet further geological exploration work was suspended due to the expiration of the joint venture geological exploration license. The issuance of a new one has been delayed due to the changes in the Russian legislation that allowed working on the shelf only for companies where the share partially owned by the state exceeded 50%.

In the last few years, Russia and Kazakhstan have started working on an agreement for joint development of the field; and in early 2013 the oil company "Centralnoye" was established with the Kazakhstan company KazmunaiGas as one of the shareholders. The latter got 50% of the company, but Gazprom and LUKOIL received 23% each. This autumn, the Russian government approved the agreement with Kazakhstan on joint development.

Kazakhstan and Russia are also planning to sign one more joint contract on the Caspian; this one for the Hvalinskoe field development. The participants in this project include LUKOIL (50%), KazMunaiGas (25%), Total (18%) and GDF (7%).

Originally, the contract was expected to be signed in 2009, but it was postponed due to several reasons. These included the need to coordinate terms for investors; create a special tax regime and align it with the relevant Russian legislation, and then harmonize the hydrocarbon export schemes. The project continues to be stalled, and it seems that the agreement will not be signed this year.

Nevertheless, a breakthrough was experienced in another joint project, Evraziya, which involved drilling an ultra-deep well (15 km) in the Caspian Trench area. In early October, the presidents of Russia and Kazakhstan – Vladimir Putin and Nursultan Nazarbayev – gave the starting signal to this new joint project. The parties hope to discover new hydrocarbon reserves in that area. The initial project investments will account for $500 million, and a consortium is planned to be established for carrying out the project work. Potential participants include LUKOIL, Rosneft, Shell, Chevron and others.