The subsea industry has been hit hard by the downturn, despite being supported initially by substantial backlogs. Those backlogs are now eroded and at their lowest levels for more than a decade. Current order intake has recovered, but not enough to sustain activity at comparable levels to those seen in previous years. The supply chain is seeing a drive toward scale to achieve lower costs, with several ‘mega-mergers’ completed in the last 18 months. Analyst Westwood Energy forecasts subsea hardware capex to total $85.3 billion over the next five years. 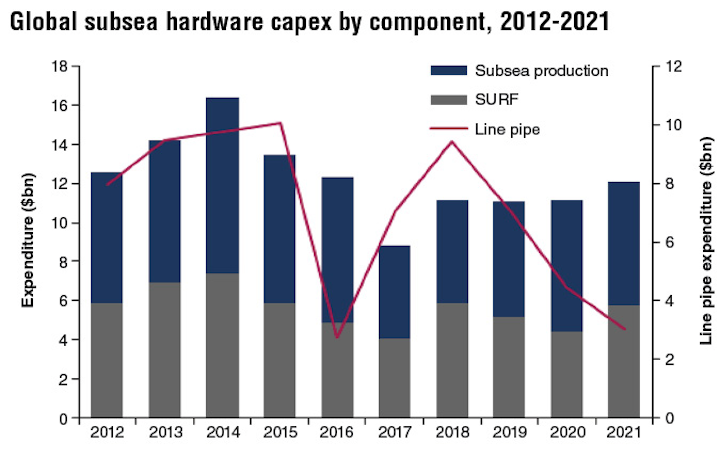 Europe to lead expenditures over next five years

Over the 2017-2021 period, Westwood Energy expects subsea hardware capex to total $85.3 billion. The decline in oil prices since 2014 has had a significant impact on the market. Expenditure in 2017 represents a major decline in spend compared with 2014, which was the peak year for installation activity. Subsequently, total forecast expenditure over 2017-2021 is expected to decline by 22%, relative to the 2012-2016 period. This is due to many projects being cancelled or delayed in response to low prices. However, market conditions are changing, with the downturn forcing operators to re-evaluate the development concepts of various projects and to look for efficiencies and new business models to survive.

While 2014-2016 saw many delays and cancellations, the smaller number of projects sanctioned has grown throughout 2017, leading to an improved outlook for the remainder of the forecast. Many projects have seen a longer gestation in the front-end engineering and design stage before moving to final investment decision, often involving project re-engineering or even re-tendering. Mad Dog Phase II is a notable example. The BP-operated deepwater project in the US Gulf of Mexico endured many project revisions, and at one stage was cancelled, despite the oil price being more than $110/bbl at the time. The cost of the project was reduced from more than $20 billion to less than $9 billion, with the final investment decision having been taken in early 2017. Other projects, such as Bonga SW and Chevron’s Rosebank, have followed a similar process, and both are now expected to be sanctioned after years of cost-related delays. These projects, in addition to investment in new discoveries, will boost expenditure after the nadir of 2017. 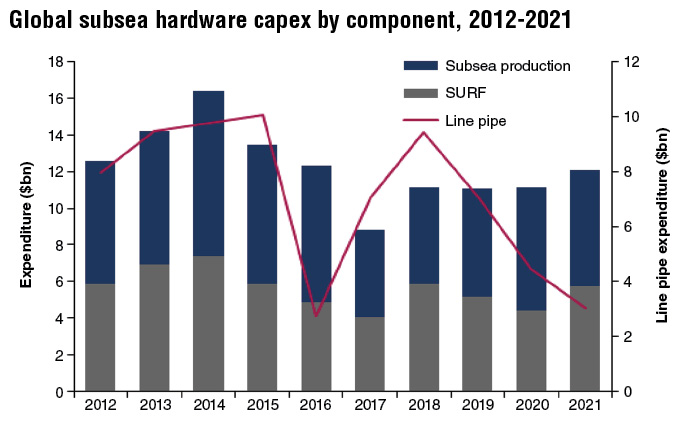 Subsea production hardware capex is forecast to total $29.1 billion, with a 7% compound annual growth rate forecast between 2017 and 2021. The impact of limited project sanctioning since the oil price downturn is evident over the 2015-2017 period, as expenditure has declined significantly. Mega projects such as CNOOC’s Lingshui 17-2 project (China), Shell’s Bonga South West (Nigeria), Cairn Energy’s SNE (Senegal), and Petrobras’ presalt basin drilling will drive subsea production hardware capex in the latter years of the forecast period. Projects sanctioned prior to the downturn, as well as projects with short lead times, such as ExxonMobil’s Liza project (Guyana) and Eni’s Zohr gas development (Egypt), sanctioned during the 2016-2017 period, will support expenditure in the near term.

SURF is forecast to account for 30% of the subsea hardware market, with expenditure totaling $25.2 billion over the 2017-2021 period. Beyond the long-distance tieback projects seen offshore Egypt and East Africa, power-from-shore solutions in projects such as ADNOC’s Nasr (UAE) and Statoil’s Johan Sverdrup (Norway) represent significant contract awards that will contribute to SURF expenditure in 2018 and 2019.

The oil price downturn has introduced a different dynamic to the SURF market, as operators continue to re-evaluate various development plans. Changes to the development concepts for certain projects represent a potential upside for the SURF market, as standalone projects with shorter lengths of SURF required are abandoned in favor of subsea tiebacks to shore or existing infrastructure which would require additional flowline and umbilical length. Beyond the forecast period, projects expected to contribute to SURF demand include ExxonMobil’s Scarborough (Australia), PTTEP’s Cash Maple (Australia), and INPEX’s Abadi. In the case of the Abadi project, the government’s preference for an onshore LNG terminal prompted a change in the development concept. Given that the proposed land-based facility sites are hundreds of kilometers away (Tanimbar – 150 km, Aru Island – 600 km, Maluku Island – 150 km), this will support the size of the associated SURF requirements.

The line pipe sector will remain buoyant in the near term, as mega gas pipeline projects such as Gazprom’s TurkStream and Nord Stream Phase II, and Saudi Aramco’s Hasba, will account for a considerable proportion of expenditure through to 2019. Line pipe capex over 2017-2021 will amount to $31 billion – representing 36% of forecast expenditure.

Europe will account for the highest proportion of expenditure (29%) over the forecast period. This is driven by large gas pipelines expected to transport Russian gas to Western Europe and Turkey. Other major developments such as Statoil’s Johan Sverdrup and Johan Castberg, as well as a renewed drive from Chevron to sanction the Rosebank project, will lead to a sustained level of subsea investment in Europe over the forecast period.

Africa will account for 17% of forecast expenditure over 2017-2021. Despite the fall in oil prices, which has weakened investment in traditional subsea development areas in Africa such as Nigeria and Angola, fasttrack development of Eni’s Zohr field and BP’s development of West Nile Delta Phase II has supported new investment in the region in recent years. The commitment of various stakeholders to develop the large gas reserves in the East African basin will support activity in the region in the latter years of the forecast period. Expected investment offshore Senegal and Mauritania will also contribute to the forecast recovery in expenditure in the region over the 2017-2021 period.

The Asia/Pacific region will account for 21% of forecast expenditure over 2017-2021, driven by various deepwater developments in India and China. The continued development of the Greater Gorgon gas reserves and PTTEP’s motivation to develop its Cash Maple reserves for gas exports to Thailand will further support subsea investment in the region. 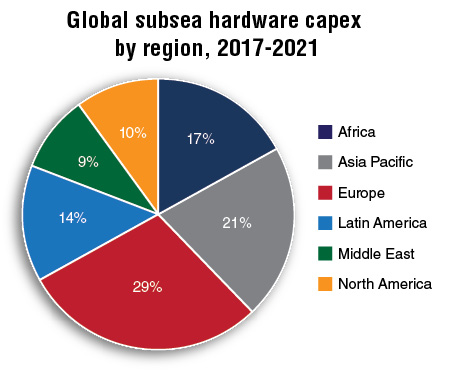 Activity in Brazil’s presalt basins and deepwater reserves in the US Gulf of Mexico will support subsea hardware expenditure in the Americas, which is forecast to total $21 billion over the 2017-2021 period. Expenditure in this region will also be supported by projects such as ExxonMobil’s Liza field off Guyana, and the potential development of Premier Oil’s Sea Lion development offshore the Falkland Islands.

The subsea industry has been hit hard by the downturn, despite being supported initially by substantial backlogs. Those backlogs are now eroded and at their lowest levels for more than a decade. Current order intake has recovered, but not enough to sustain activity at comparable levels to those seen in previous years. The supply chain is seeing a drive toward scale to achieve lower costs, with several ‘mega-mergers’ completed in the last 18 months.

The drive toward cleaner energy sources is causing a long-term structural shift in the use of oil and gas. This has led to renewed long-term investments in vast conventional offshore gas reserves. Emerging new gas provinces such as the East African and East Mediterranean basins are likely to drive demand for subsea solutions beyond the forecast period.