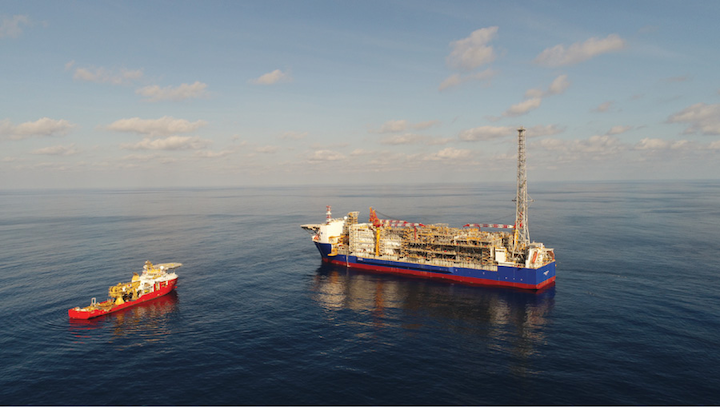 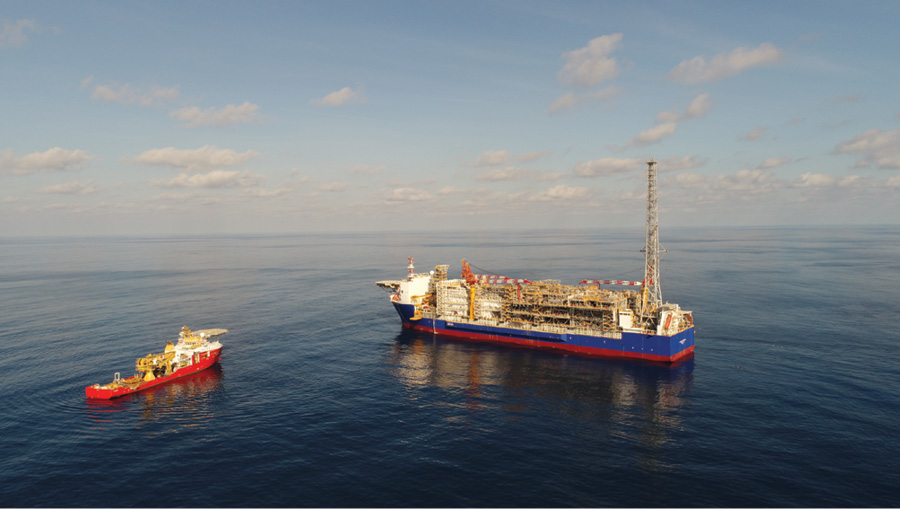 Last month, Chevron Corp. produced first LNG at the Wheatstone project. This involves development of the Wheatstone and Iago fields in the Carnarvon basin offshore northwest Australia as well as two LNG trains and a domestic gas plant. At full capacity, the project’s two-train LNG facility will supply 8.9 mtpa of LNG for export to customers in Asia. The project features a subsea gas gathering system tied back to a processing platform in 70 m (230 ft) of water. A 44-in. diameter, 225-km (140-mi) trunkline transports gas from the platform to the LNG facility located at Ashburton North, 12 km (7.5 mi) west of Onslow. The first cargo shipment is expected soon. According to partner Woodside Petroleum, an LNG tanker has arrived at the Wheatstone marine terminal and loading system commissioning is under way. Loading operations will commence soon. The LNG Train 2 is expected to start up in six to eight months.

The Chevron-operated Wheatstone LNG facility is a joint venture between Australian subsidiaries of Chevron (64.14%), Kuwait Foreign Petroleum Exploration Co. (13.4%), Woodside Petroleum Ltd. (13%), and Kyushu Electric Power Co. (1.46%), together with PE Wheatstone Pty Ltd., part owned by JERA (8%). When the final investment decision (FID) was taken in September 2011, the project was estimated to cost $29 billion and production was scheduled to start in 2016. However, in October 2016, Chevron reported that the project’s cost had increased to $34 billion. The operator said that part of the $5-billion increase was due in part to the overheated construction market at the time work began on the project and the late module delivery. The company also admitted that it had failed to estimate the quantity of materials needed for the project, in part brought about by taking the decision to proceed when only 15% of the engineering work had been completed. The rest was based on rules of thumb and factors.

Hook-up and commissioning of the central processing facility (CPF) and FPSO are under way for the INPEX-operated Ichthys LNG project in the Browse basin, 220 km (137 mi) offshore Western Australia.

In May, the CPFIchthys Explorer completed the 34-day, 5,600-km (3,480-mi) tow from the Samsung Heavy Industries shipyard in Geoje, South Korea, and was connected to 28 pre-installed mooring chains, weighing more than 25,000 tons, in 250 m (820 ft) of water. INPEX claims this is the world’s largest semisubmersible platform. It weighs 120,000 metric tons (132,277 tons) and the topsides measures 130 m (427 ft) by 120 m (394 ft). The CPF is the central hub for initial offshore processing of all well fluids delivered from a 130-km (81-mi) network of subsea well infrastructure. Gas from the CPF will be sent through an 890-km (553-mi), 42-in. subsea pipeline to the onshore LNG facility at Bladin Point near Darwin for processing. Saipem performed the pipelay, which is said to be the longest in the Southern Hemisphere and the third longest subsea pipeline in the world.

In August, the FPSOIchthys Venturer completed the 26-day, 5,600-km tow from the Daewoo Shipbuilding & Marine Engineering shipyard in Okpo, South Korea, and was connected to 21 pre-installed mooring chains, weighing more than 15,000 metric tons. The 336-m (1,102-ft) long, 59-m (193-ft) wide FPSO is designed to hold 1.12 MMbbl of condensate and operate for 40 years without drydock. Located 3.5 km (2.2 mi) away from the CPF, the FPSO will process, stabilize, and store the condensate delivered from the Ichthys Explorer before periodically offloading it to tankers for export to market. 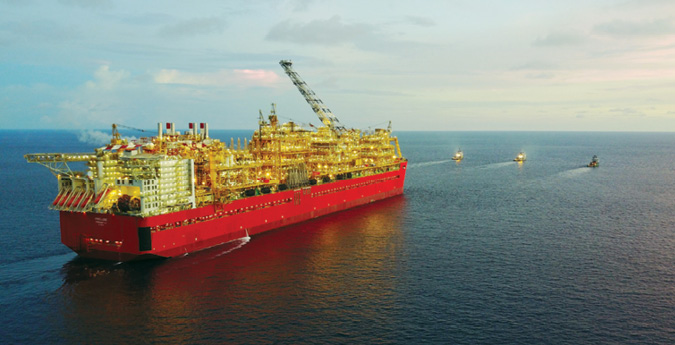 On arrival, 16 pre-positioned mooring chains will be lifted from the seabed and secured to the vessel’s 93-m (305-ft) high turret. Once secure, the hook-up and commissioning phase of the project will begin, which is expected to take nine-12 months. Seven production wells will feed gas and condensate from the reservoirs via four flexible risers into the facility. All subsea connections join the facility via the turret. According to Shell, the turret’s swivel design enables the facility to pivot according to wind and sea conditions while it remains fixed to the seafloor. ThePrelude FLNG facility is expected to produce 3.6 mtpa of LNG, 1.3 mtpa of condensate, and 0.4 mtpa of LPG.

As for the country’s other potential LNG projects, Woodside continues to target the development concept selection by the end of the year and front-end engineering and design in 2019 for Browse. The Browse Joint Venture and the North West Shelf (NWS) Project are progressing commercial discussions and joint technical studies on the feasibility of NWS infrastructure processing the Browse resources. The proposed offshore development concept involves two FPSOs delivering 10-12 MMt/yr of processed gas to existing production facilities.

Development concepts comprising either an FLNG facility or use of existing LNG process infrastructure on the Burrup Peninsula continue to be investigated and assessed for the Scarborough project. According to Woodside, assessment of the NWS Project’s proposal to process the resources through NWS infrastructure is ongoing by the Scarborough Joint Venture.