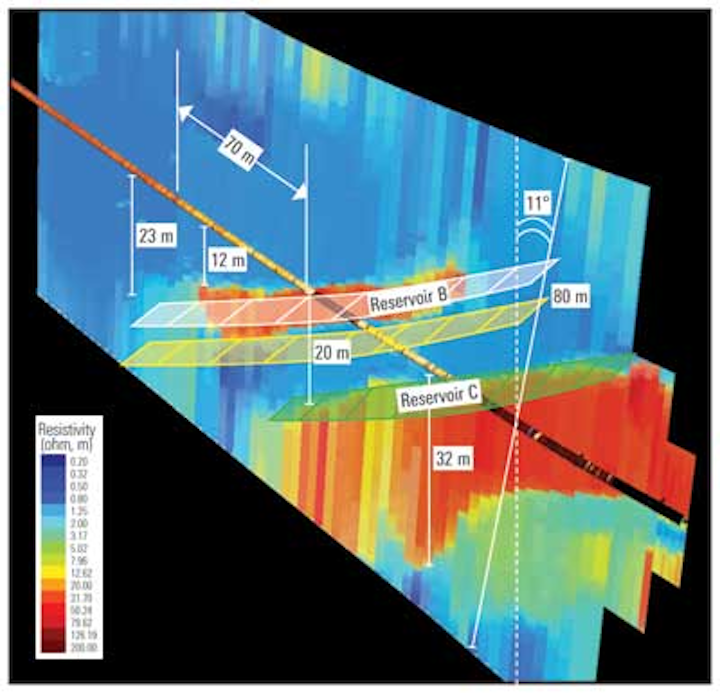 Offshore magazine asked measurement-while-drilling/logging-while-drilling (MWD/LWD) providers to highlight their latest advances, and the responses demonstrate the growth of applications for real-time information. The annual MWD/LWD services directory provides a detailed and comprehensive listing of the downhole technology that is currently available in the market.

Directional drilling precision and geomechanics analysis have benefited from the latest innovations from Schlumberger. Two new logging-while-drilling (LWD) services have been announced to improve measurements in those areas respectively.

The GeoSphere reservoir mapping-while-drilling service enables engineers to image a huge reservoir volume, coaxial with the wellbore, and more than 200 ft (61 m) in diameter. Typically this transcends any borehole effects such as washouts and mud filtrate invasion, and provides clear resistivity mapping in real time as drilling progresses. With unparalleled depth of investigation, it is easy to identify reservoir "sweet spots" in plenty of time to steer into them. Also, avoidance of reservoir boundaries and geohazards is greatly enhanced by a combination of early warning and sharp images that help drillers recognize the hazards and steer clear of them.

Recently, Petrobras used the GeoSphere service to land three offshore wells in multiple channel sand bodies of unknown depths without the use of pilot holes. With a clear map of each channel with respect to its neighbors, engineers were able to select the optimum well trajectory to land in each. On two of the wells, alteration of planned trajectories was required based on real-time mapping information. Also, while landing the wellbore in the first two sands, the engineers were able to image the third sand lying 13 ft (4 m) beneath the second sand. All three sands were mapped including their relative positions, thicknesses, and horizontal extents. Structural dip and depth distribution were determined, and the reservoir base was shown to be 10 ft (3 m) higher than expected, prompting a crucial model and trajectory update. 3D reservoir maps based on surface seismic were altered to reflect the new information from the GeoSphere surveys. Sweet spots in all three channel sands in each well were penetrated and reservoirs were accurately mapped.

The SonicScope 825 multi-pole sonic-while-drilling service was used in the South China Sea to provide critical geomechanics analysis to reduce drilling risk in a high-pressure/high-temperature (HP/HT) and stick-slip environment. Faced with a narrow drilling margin, and the presence of a very high-pressure formation, the operator performed a detailed analysis of the reservoir based on sonic memory data from four offset wells and surface seismic images. As drilling progressed, engineers were able to match real-time observations from the SonicScope 825 tool with geomechanical information from the preparatory analyses. As a result total depth (TD) was reached without incident and in good time.

Real-time compressional and shear slownesses were obtained through the high dip region that had previously caused considerable stick-slip issues. A high-porosity gas formation was penetrated and evaluated despite evidence of deep mud filtrate invasion.

With their ability to provide real-time data contemporaneously with drilling, the popularity of LWD solutions is rapidly growing. Bimodal acoustic LWD logging using the X-BAT service from the Sperry Drilling Services division of Halliburton has reduced uncertainties in deep and ultra-deepwater wells. Steady improvement in LWD quality along with a broader service offering has made LWD measurements challenge those made with wireline devices, especially in high-profile deepwater environments. Of particular value are the acoustic tools that enable accurate geomechanics information to be derived. The XBAT service provides bimodal compressional and shear measurements along with an ultrasonic caliper log. These update the pore pressure and fracture pressure models to keep equivalent circulating density (ECD) optimal for the formations being drilled as they are being drilled. The caliper provides vital information on borehole integrity. Not only does the XBAT service provide vital real-time geomechanics information, but it ties-in nicely with surface seismic surveys.

Many, if not most, deepwater wells have very tight drilling margins. Real-time ability to make adjustments to maintain balanced drilling conditions pays off in many ways. Safety is but one of them, although it is the one most cited. Drilling efficiency, bit life, and borehole quality are also affected by ECD. With real-time dynamic measurements, every aspect of hydraulic force at the toolface is known, including the static pressure from the mud column, but also the surge pressure when the pumps are restarted following a connection and the kinetic pressure caused by mud circulation at the bit nozzles.

With all the emphasis on completions, geomechanical measurements have become some of the most critical in the formation evaluation program. By combining complementary LWD services in a single bottomhole assembly (BHA), critical information can be obtained to merge into the 3D reservoir model, benefiting all subsequent decisions. Both drilling and completion activities benefit from rock stiffness, texture, and stress information. To have this information in real-time while drilling adds to its value.

The value of real-time LWD/MWD measurements to improve drilling efficiency while providing critical reservoir information such as the locations of so-called "sweet spots" has begun to influence traditional wireline users to switch when it makes economic sense. The growing popularity of the technology has instrument providers developing tool systems for sale or lease. This has opened up markets once considered the exclusive territory of the large, integrated service companies.

Now, service providers who previously lacked the R&D budgets to develop their own LWD/MWD capabilities can offer competitive services using tool systems developed by companies such as Enteq Upstream Plc. Previously focused on MWD with its Enteq-XXT technology platform, the company has recently negotiated a memorandum of understanding with Target Well Controls of Aberdeen, Scotland. The objective is to integrate the latter's Target Propagation Wave Resistivity (PWR) technology with Enteq's to offer a more comprehensive LWD/MWD capability. Compatibility with Geolink systems is an added bonus. PWR is a fully tested LWD technology, and has been field-proven over the past decade. Tool systems have been developed for all current collar sizes (4.75-in., 6.75-in., 7.75-in., and 8.25-in.) plus a unique slim hole 3.50-in. diameter system for the Russian market. According to the company, the addition of the PWR to the Enteq-XXT MWD product line will greatly advance the capabilities of users making them more competitive in global markets.

The PWR system offers single frequency (1 MHz) borehole compensated propagation wave resistivity that operates in any drilling fluid. Like other propagation systems the tool measures both amplitude and phase shift. It is battery-powered and stores recorded measurements in 2 MB of selectable rate, non-volatile memory. Measurement updates are telemetered to surface by mud pulse or electromagnetic transmission every 60 sec on average. All sizes are rated to 20,000 psi and 300°F (150°C). An optional mud pressure while drilling sensor is available.

APS Technology's Wave Propagation Resistivity Sub (WPR) is a spatially compensated, 400 kHz/2 MHz tool designed for wireline-equivalent LWD services in all mud types. Applications include geosteering, correlation, pore pressure trend analysis, casing point selection, wireline replacement, logging while tripping, and logging with and without the flow switch enabled (for air- and foam-drilled wells). WPR is available in 3.5-in., 3.75-in., 4.75-in., 6.75-in., and 8.0-in. sizes. APS offers a subwall-integrated pressure-while-drilling option for 4.75-in., 6.75-in. and 8.0-in. WPR.

The company offers a full suite of MWD services that can be run singly or in combination with the WPR service. These include a SureDrill drilling optimization service that combines real-time surface and downhole measurements with drillstring modeling. Experience has been excellent with increased penetration rates and extended bit life. Early warning of drilling dysfunctions is included to minimize unplanned trips. The company's SureShot MWD offers directional and inclination measurements along with gamma ray and mud pulse telemetry, as well as a software extension vibration memory module (VMM) that can analyze bit bounce, whirl, and stick-slip vibration. A drilling dynamics module (DDM) measures weight-on-bit, torque-on-bit and bending-on-bit along with temperature and internal and external mud pressure.

Weatherford continues to push the envelope in deep, hot wells with a record-setting performance at 28,500 psi for a Quad-Combo combination tool string (resistivity, density, neutron, and sonic) in the deepwater Gulf of Mexico. Since 2000, the company has focused on developing tools capable of withstanding hostile bottomhole environments. The company's Revolution Rotary Steerable System has been a leader in HP/HT applications. Unlike wireline systems that are only exposed to harsh bottomhole conditions for a short period, LWD/MWD tools must be able to survive and function for many days in extreme environments.

The company has announced advances in pulse detection that extend the distance over which steering commands can reliably be sent and received downhole, as well as real-time log data telemetered to surface. The drilling fluid and cuttings entrained in it can impede the ability to detect and decode the signals. Considerable engineering work has been invested in pulse-detection circuitry in conjunction with the company's hostile environment efforts extending its overall deep hole capabilities.

The FASTrak LWD service enables operators to make an unlimited number of formation pressure measurements and up to 16 single-phase formation fluid samples on a single trip. The tool can also make real-time insitu measurements of reservoir fluid properties before committing a sample chamber.

Recently offshore Vietnam, the service was run in an S-profile deviated well. Typically, a drill pipe-conveyed wireline tester would have been run, but there was added risk of a stuck tool and extended rig time would have been required. By running the test tool as part of the LWD string, all measurements could be taken contemporaneously with drilling operations. Baker Hughes was challenged to establish accurate individual pressure gradients over a succession of thin beds of variable fluid mobility and different fluid compositions. A high level of filtrate invasion was predicted, so clean-up time could have been problematic.

On a single descent into the well, 60 pressure tests were acquired, an industry record for competing technologies in the marketplace. Based on real-time in situ fluid analysis that identified highly-prospective beds, six oil samples were attempted and successfully acquired. The tool features SmartPad technology that senses whether the packer element has the potential to lose seal. If so, pad pressure is automatically increased to maintain seal integrity.

According to the company, $2.2 million in rig-time and equipment savings accrued to the customer.