Gulf of Mexico drilling activity remains robust and has continued to show a remarkable comeback from the events of 2010, but the market has seen a decline in activity in recent months as operators scale back their commitments due to rising costs, and with past spending commitments coming due. 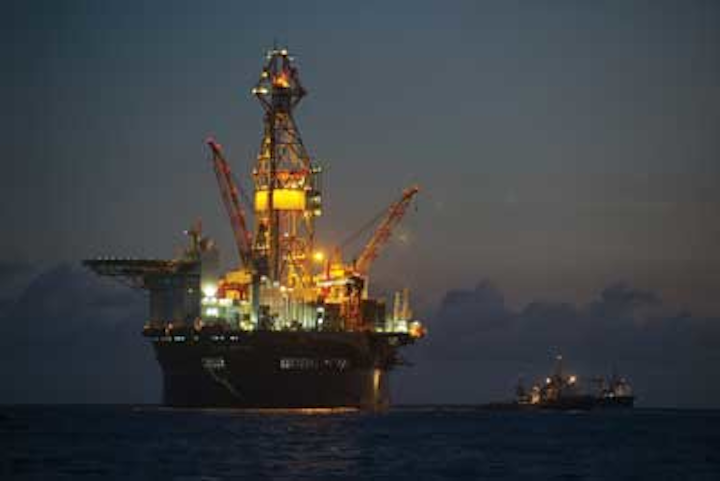 Numbers down recently but still up since 2010

Gulf of Mexico drilling activity remains robust and has continued to show a remarkable comeback from the events of 2010, but the market has seen a decline in activity in recent months as operators scale back their commitments due to growing costs, and with past spending commitments coming due.

According to Baker Hughes rig count data, the number of rigs working in the Gulf dipped to a low of 12 in July 2010, three months before the federal moratorium on drilling was lifted. By September 2013, there were 63 rigs working in the GoM, the majority targeting oil in the deep waters of the outer continental shelf. The count has since backed off that high, though it matches levels seen before April 2010. According to the Baker Hughes rig count data, there were 58 rotary rigs operating in the Gulf of Mexico as of May 9.

According to IHS Petrodata, total contracted backlog for the US GoM has fallen from approximately 2,186 months per rig in early December 2013 to about 2,043 months per rig as of early May 2014. However, the number of drillships in the region has increased by seven units over the same period, stretching out the number of rigs by which the total is divided.

"The combination of the fast-growing floater supply with the relatively few floating rig contracts signed over the past several months means the floater segment has suffered more of a decline in contracted backlog months than the much-larger jackup segment," says Cinnamon Odell, rig analyst at IHS Petrodata. For the floating rig segment, contracted rig backlog stands at about 1,921 months of work as of early May. This is a decline from 2,017 months of work on rig contractors' books in early December 2013. At present, about 86% of remaining 2014 days are booked for drillships and around 61% for semis. For 2015, 85% of drillship days are locked up, as are 41% of semi days, says Odell.

Looking at the jackup segment, only 30% of remaining 2014 days in the US Gulf are already contracted. Odell notes that 21 of the region's 58 jackups are cold stacked, meaning they are not being actively marketed for work. In December 2013, jackups had a total of 169 months of upcoming work secured. "Now that figure has dropped to about 123 months of future work," Odell observed. "Less than 1% of available days in 2015 are booked, leaving essentially the entire year still open for any operator looking to drill in jackup territory next year."

The reasons for the decline indrilling activity vary among operators, but are most often tied to rising costs or limited budgets. Some operators have been reducing their spending due to high costs; others cite the fact that past spending commitments are now coming due. "We've seen some gaps between programs for jackups as well as floaters," Odell notes. "And for the first time in many years, not counting the post-Macondo moratorium period, US GoM floaters are idle and looking for work both here and abroad." Odell notes that in May, Transocean confirmed that its GSF Development Driller II has mobilized out of the US Gulf for work in the Black Sea. That rig had been working in the GoM fully utilized since it arrived for its maiden job in 2005.

Odell also notes that operators are taking advantage of the fact that floater rates are coming down, "so those that are looking for rigs for upcoming programs are hesitant to sign on the dotted line while prices continue to drop. They are waiting to see how things play out before they commit." So while some operators are committed to spending less this year than in past years, demand still exists. "It's just a matter of negotiating the best deal on the part of the rig contractor and the operator," Odell observes.

Despite this recent decline, industry analysts believe that as long as oil prices stay in the $80 to $90/bbl range, drilling in the Gulf will remain active. Major oil companies like ExxonMobil, Chevron, and BP are spending billions of dollars developing deepwater fields that are projected to almost double the flow of oil over the next decade.

The latest sale of federal oil and gas leases in March drew more than $870 million in high bids, including $41.6 million from BP. The British oil company was permitted to bid on leases for the first time since the Macondo spill, after reaching an agreement with the Environmental Protection Agency in March.

To be sure, safety regulations and permitting requirements have escalated since 2010, and that has slowed drilling activity. Since Macondo, the federal government has instituted stricter requirements on safety equipment like blowout preventers, and on the readiness of spill response teams.

Regulators are also forcing companies to take a more systemic approach to drilling safety. Instead of following a set of rules, companies are being required to develop drilling plans that prove they have taken appropriate steps to avoid blowouts. And those plans must be signed off on by a third-party consultant.

At least partly as a result, drilling costs in the GoM have increased dramatically over the last five years. The regulations set in place since Macondo require more expensive equipment, and have extended drilling periods on some deepwater wells to nine months, roughly 30% longer than before. Despite all this, increased demand in the Gulf and other offshore areas has driven up the rates on the advanced drilling rigs needed for deepwater jobs to more than $500,000 a day.

In recent weeks, a number of operators and contractors have updated their exploration and development efforts in the Gulf, or announced the start of new drilling campaigns.

The Cardona South well extends the productive zone of the Mississippi Canyon 29 TB-9 well to the adjacent fault block to the south and sets up a potential second and third well in the fault block. Plans are to flow the Cardona South well (and the previously announced Cardona discovery) to the Stone owned and operated Pompano platform, with first production expected in early 2015.

Production casing has been set and cemented in the Cardona South well and the subsea tree equipment will soon be put in place. The rig will then move back to the original Cardona well (MC 29 #4 well) to begin completion operations before returning to complete the Cardona South well. Separately, the original Cardona well was previously estimated to have approximately 84 ft (26 m) of net oil pay. After further evaluation, the estimated net oil pay for this well is now approximately 96 ft (29 m).

Also in April, Maersk Drilling reported that itsMaersk Valiant drillship had begun its voyage from Singapore to the Gulf, where it will commence a two-year contract with ConocoPhillips and Marathon Oil Corp. The estimated contract value with ConocoPhillips and Marathon for Maersk Valiant is $694 million including mobilization, but excluding cost escalation.

In May, Statoil announced that it had started drilling Martin, a high-impact prospect in the Gulf, on April 20. The company says that it considers Martin one of the top prospects in its global portfolio; and that, since acquiring the prospect in 2012, it has been able to advance it in 20 months, considerably faster than the normal maturation time.

Exxon Mobil is pursuing what is believed to be one of the largest deposits in the deepwater area, the Julia field. At a depth of more than 30,000 ft (9,144 m), Exxon is spending $4 billion, with production set to begin in 2016.

BP continues to focus on its deepwater fields in the Gulf, with a company-record 10 rigs operating there now. Officials say that the company will spend $10 billion over the next five years in thedeepwater Gulf, which amounts to about 10% of its worldwide exploration and production budget.

Likewise, Chevron has its Jack/St. Malo and Big Foot fields coming online this year and next. They are projected to eventually produce almost 170,000 b/d of oil — on par with daily oil production in Wyoming last year.

Analysts are projecting oil prices will drop close to $80 by the end of 2015 as large quantities of crude come online. That could put a dent in the domestic hydraulic fracturing boom, in which operators must constantly drill new wells to keep up with rapid declines in productivity.

But the same impact is not expected in the Gulf of Mexico. With billions of dollars invested and steadier productivity from deep Gulf wells, the oil companies have committed themselves for the long term.