Borr Drilling would be the contractor with the world’s largest and youngest jackup fleet if all rigs over 35 years of age were retired in the short term, according to Rystad Energy. 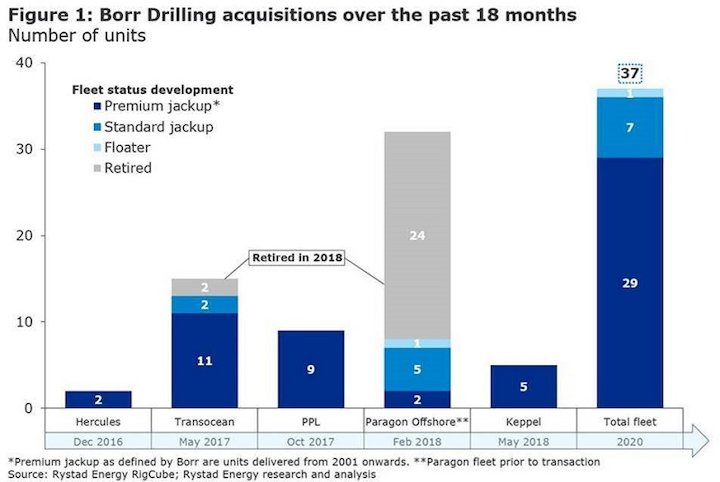 OSLO, Norway – Borr Drilling would be the contractor with the world’s largest and youngest jackup fleet if all rigs more than 35 years of age were retired in the short term, according to Rystad Energy.

In that case, market utilization rates would surge to 89% by 2020, the analyst claims, exceeding rates experienced during the period before the downturn.

“From the outset, Borr’s founders were betting on a market whose recovery was often posed as an ‘if’ rather than ‘when’ by other voices in the industry,” said Oddmund Føre, Rystad’s vice president of Offshore Rig Analysis.

“Now, as recovery does seem to be on the horizon, our analysis shows that Borr’s strategy has put them well positioned to take advantage of improving market conditions.”

Over the past 18 months, Borr Drilling has risen from a newcomer in jackups to one of the sector’s largest contractors. It took advantage of the depressed jackup market by acquiring premium newbuild rigs at reasonable prices, making strategic moves for distressed assets.

It has also pursued an aggressive rig retirement program, opting (along withParagon) to scrap 26 aging jackups this year, compared with the total of 17 units retired by all contractors last year.

“As Borr positions itself for the long term, its rig attrition program is also helping the entire jackup market by pushing up utilization levels,” Føre said.

Following the sector’s low point in 2017, new infill and workover drilling programs are driving jackup demand along with exploration drilling, and this trend should continue as cash flows improve a higher oil price and lower-cost environment (Figure 1).

However, Rystad warns that the outlook for jackup utilization remains flat, due mainly to the high number of old rigs still in the market.

“While it is unlikely that all rigs over 35 years will be retired, it illustrates that recovery in utilization is achievable, though not without some cuts,” Føre said.

“Not only is the company’s fleet newer, but it has…positioned itself well for underserved markets likeWest Africa.”