Construction under way of Karish-Tanin FPSO

First steel has been cut at the COSCO yard in Zhoushan, China on the Karish and Tanin FPSO, which will work in deepwater offshore Israel. 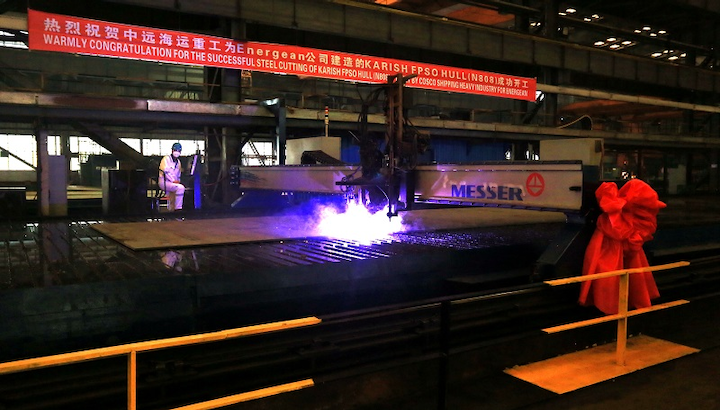 ATHENS, Greece – First steel has been cut at the COSCO yard in Zhoushan, China on the Karish and Tanin FPSO, which will work in deepwater offshore Israel.

Field operatorEnergean contracted TechnipFMC to deliver the FPSO and SURF content for the development, with first gas scheduled for 1Q 2021.

Next March Energean plans to spud Karish North, the first of four wells it has lined up offshore Israel during 2019.

This will target 1.3 tcf of prospective resources in addition to the proven 2.4 tcf of 2P reserves in Karish-Tanin. The well will drill into the deeper D sand horizons, which have been proven in the Tamar gas field offshore Israel (upper D sands) and the Aphrodite gas discovery offshore southern Cyprus (lower D sands).

Energean believes a success could have a positive impact on prospects for the undrilled Karish East, which contains prospective resources of 0.5 tcf of gas and 7.5 MMbbl of liquids.

Development drilling will start on Karish on conclusion ofKarish North, with the three wells on the Karish Main structure due to be completed by end-2019.

Collectively they should deliver around 406 MMcf/d to the Israeli domestic market although their gross production capability should be higher.

Energean has a further six options available on the Stena drilling contract. Consultant NSAI has identified additional prospective resources of 5 tcf and 62 MMbbl across the Tanin lease and five exploration blocks that were awarded as part of the recent offshore licensing round.

If Energean opts to drill a fifth well, it would likely target structures in block 12.

Otherwise, work on the subsea facilities for Karish-Tanin is progressing in line with expectations, the company says, and it has awarded a second contract to Wood to provide operations and maintenance manpower and specialist engineering services over the next five years.

The first order, issued last April, involves preparation of systems and procedures to ensure safety and efficiency throughout the pre-operation period.