Total announces major deepwater discovery in the US Gulf of Mexico

Total says that it has made a major oil discovery in the Ballymore prospect in the deepwater US Gulf of Mexico. 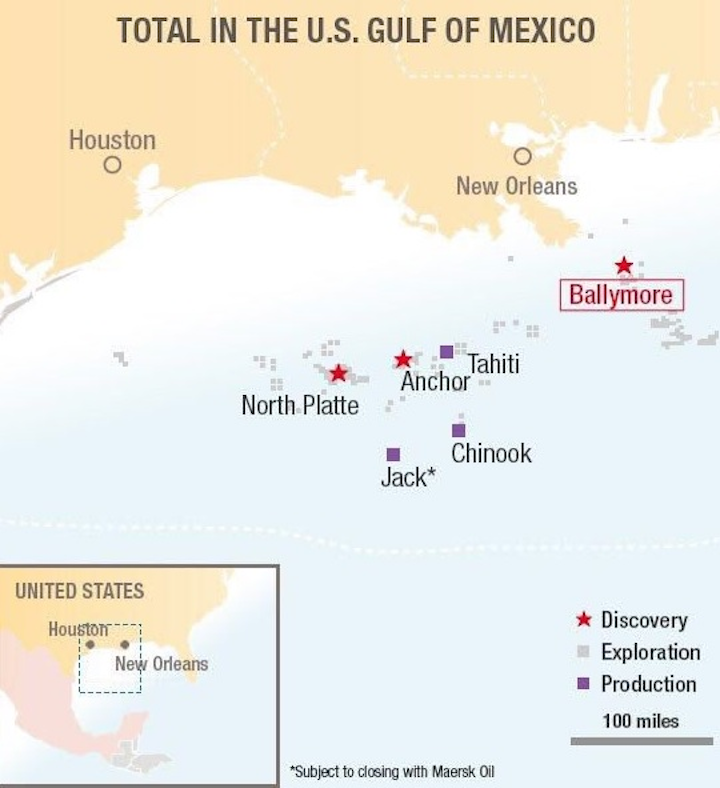 Total's Ballymore deepwater oil discovery in the Gulf of Mexico

PARIS –Total says that it has made a major oil discovery in the Ballymore prospect, located deep offshore in the US Gulf of Mexico (Eastern GoM). The well was drilled to a final depth of 8,898 m and encountered 205 m of net oil pay in a high quality Norphlet reservoir. A sidetrack well is now ongoing to confirm the upside potential.

Arnaud Breuillac, President Exploration & Production at Total, said: “This major discovery gives us access to large oil resources and follow on potential in the emerging Norphlet play. It also demonstrates all the interest of Total’s GoM farm-in agreement with Chevron, where we acquired a 40% interest in Ballymore. While already deemed commercially viable, we will work together on the appraisal of this discovery and a cost-effective scheme to ensure a rapid, low breakeven development.”

Located in water depth of about 2,000 m and 120 km from the Louisiana coast, the Ballymore prospect covers four blocks in the Norphlet play, including Mississippi Canyon block 607 where the discovery was made.

Total’s acquisition of a 40% working interest in Ballymore was part of an exploration agreement with Chevron (60%, operator) signed in September 2017 that included seven prospects covering 16 blocks in the Norphlet (Eastern GoM) and the Wilcox (Central GoM) plays.

“Ballymore is the largest discovery by Total in the prolific Gulf of Mexico and bolsters our new exploration strategy put in place since 2015,” said Kevin McLachlan, Senior Vice President Exploration at Total.