Shell says it has made one of its largest US Gulf of Mexico exploration finds in the past decade from the Whale deepwater well. 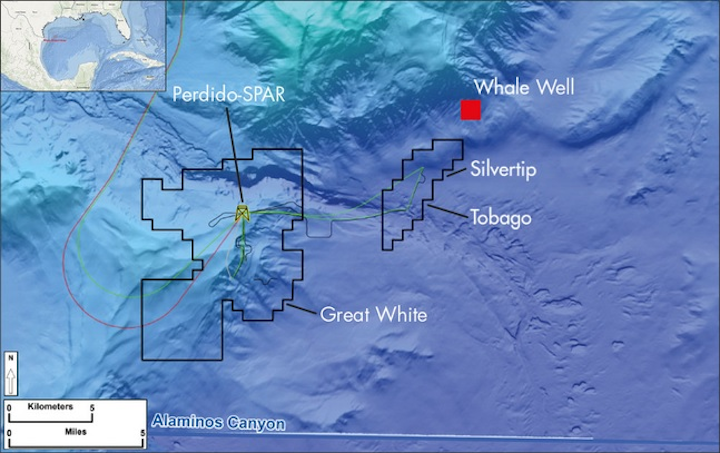 Whale deepwater oil discovery in the Gulf of Mexico

HOUSTON – Shell Offshore Inc. has announced one of its largest US Gulf of Mexico exploration finds in the past decade from the Whale deepwater well.

The well encountered more than 1,400 net ft (427 m) of oil bearing pay. Evaluation of the discovery is ongoing, and appraisal drilling is under way to further delineate the discovery and define development options.

“Deepwater is an important growth priority as we reshape Shell into a world-class investment case,” said Andy Brown, Upstream Director for Royal Dutch Shell. “Today’s announcement shows how, through exploration, we are sustaining a strong pipeline of discoveries and future projects to sustain this deepwater growth.”

Whale is operated by Shell (60%) and co-owned by Chevron U.S.A. Inc. (40%). It was discovered in the Alaminos Canyon block 772, adjacent to the Shell-operated Silvertip field and approximately 10 miles from the Shell-operated Perdido platform.

“Whale builds on Shell’s successful, nearly 40-year history in the deepwaters of the Gulf of Mexico and is particularly special in that it offers a combination of materiality, scope and proximity to existing infrastructure,” said Marc Gerrits, Executive Vice-President Exploration for Royal Dutch Shell. “The result is another opportunity to think differently about ways we can competitively develop deepwater resources.”

This major discovery in a Shell heartland adds to the company’s Paleogene exploration success in the Perdido area. Through exploration, Royal Dutch Shell says it has added more than one billion barrels of oil equivalent resources in the last decade in the Gulf of Mexico.

Shell currently has three Gulf of Mexico deepwater projects under construction – Appomattox, Kaikias, and Coulomb Phase 2 – as well as investment options for additional subsea tiebacks and Vito, a potential new hub in the region. The Shell group expects its global deepwater production to exceed 900,000 boe/d by 2020, from already discovered, established areas.