Aibel expects to complete construction this summer of the modules for the Johan Sverdrup Phase 1 drilling platform. 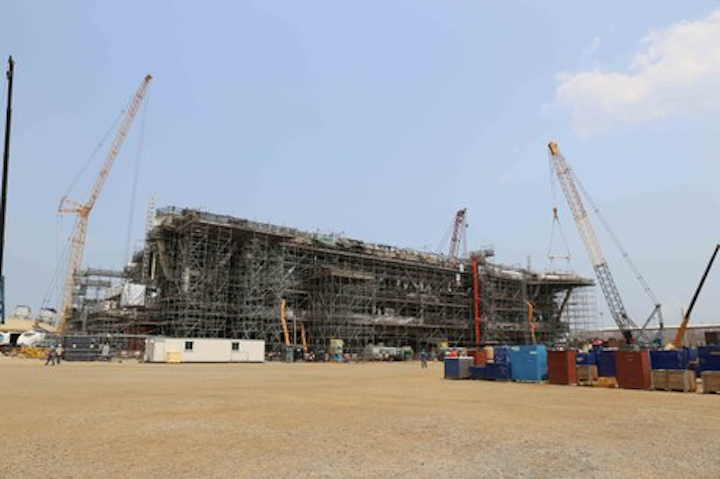 HAUGESUND, Norway – Aibel expects to complete construction this summer of the modules for the Johan Sverdrup Phase 1 drilling platform.

The 10,800-ton main support frame, the largest ever undertaken at the company’s Laem Chabang yard in Thailand, is complete, 20 months after fabrication started.

Aibel also expects the drilling support module (DSM), under assembly in Haugesund, and the drilling equipment set (DES) in Grimstad, Norway, to both be delivered on schedule.

The DSM should be mechanically complete on Aug. 22, while the DES will leave Nymo three days later.

Assembly of all three modules will take place during the first half of September in Klosterfjorden. Afterwards, the barge carrying the modules will be towed to Haugesund where it will lie alongside the quay, awaiting the start of integration work at the yard on Sept. 25.

From November, and until the platform leaves the yard in Haugesund next June or July,Statoil staff will be testing the equipment on board.

Aibel has also finished construction drawings of the H25 module forDEA Norge’s Dvalin project in the Norwegian Sea, and fabrication is now under way.

On Oct. 17, construction of the second and largest Dvalin module, M40, will start in Haugesund. Prefabrication for the modification scope at the Heidrun complex has been ongoing since May.