What a difference a downturn makes. Looking into 2018 the outlook for the offshore industry is dramatically improved. Oil prices have recovered, the industry has significantly restructured, and the “obsession” with shale growth is finally waning. 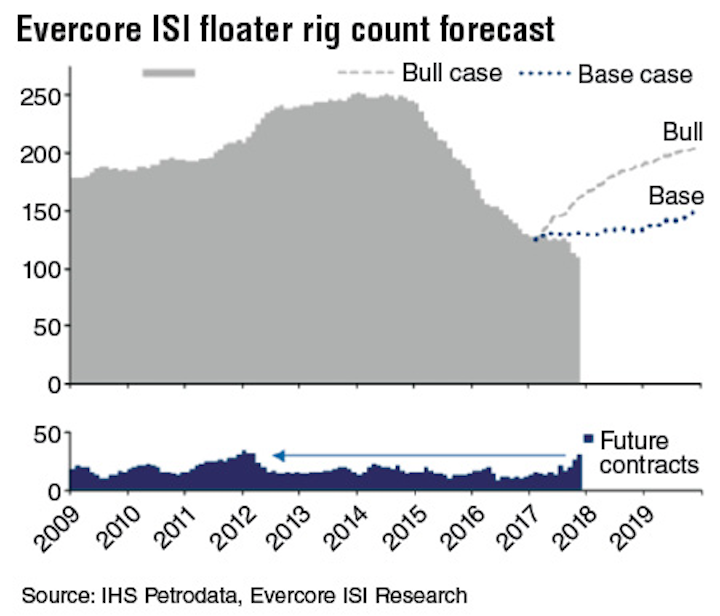 What a difference a downturn makes. Looking into 2018 the outlook for the offshore industry is dramatically improved. Oil prices have recovered, the industry has significantly restructured, and the “obsession” with shale growth is finally waning. At long last an offshore upcycle is poised to begin.

The recovery has unfolded in a predictable manner: North America rebounded first and the strongest, the international markets are staring to re-awaken, and now the last frontier – offshore – is showing signs of life. We currently expect global E&P spending to rise in the low double-digits this year compared to declines in 2015 and 2016, and flattish conditions throughout most of 2017.

We continue to have a contrarian view on the offshore markets. We believe rig supply/demand dynamics are better than they appear, especially for floaters and harsh-environment capable assets. On the demand side, fundamentals appear to have deteriorated with the working floater count falling below 100 near the end of 2017; however, the low working rig count ignores ~30 idle units that will commence new contracts imminently – the highest level since March 2012. 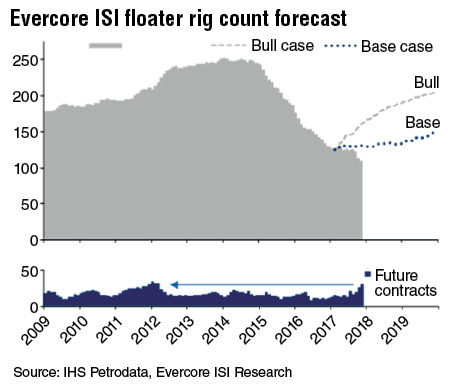 Roughly 30 projects were approved in 2017; this is more than double the number of projects approved in 2016, and we believe the industry is likely to see another sizeable increase in offshore FIDs in 2018. All of the offshore companies are reporting an increase in “tire kicking,” inquiries, and tendering. With the recent move in Brent to above $60/bbl and another landmark OPEC agreement to limit production through 2018, the animal spirits are returning to offshore operators which have been dormant for several years.

From a geographic perspective, we anticipate the most pronounced improvements in the Golden Triangle and a few other “hot spots.” It appears the industry has turned the corner in Brazil and with relaxed ownership and local content requirements the majors are scrambling to get into the subsalt. In West Africa, several large projects in Angola and Nigeria are poised for the go-ahead, and in Mexico the deepwater auctions have been successful. Mozambique and Guyana will also experience modest improvement.

We said at this time last year the major issue with deepwater projects has always been – too many chefs in the kitchen with competing agendas. The industry needed to move to a more collaborative model and we believe this is unfolding. By working together, not as disparate company man and suppliers, but as a cohesive unit dedicated to delivering production at a lower cost and a shortened time-period the market would not only survive, but it could expand. To create an efficient market is the dream of all, and we believe we are seeing the first signs of this unfolding across the global oil patch.

The offshore industry that we envisioned in the early days of 2015 is emerging. This is one of collaboration, one of common purpose, and one driven not by pure necessity but rather by innovation and vision. The industry, through alliances, mergers and JVs has created a new, bold way of conducting business. This is a huge transition from the old commercial model of discrete services and equipment sales to a new commercial model based on collaboration and integration. The technology and data-driven innovation at play is also impressive. This is creating a new, yet sustainable, offshore market which is entirely competitive with other unconventional resources. Perhaps a new E&P paradigm that focuses on shareholder returns will help elucidate the attractive economics of offshore plays following a wholescale renovation wrought from the downturn.

From topsides to subsurface, from drilling to production, and from concept to decommissioning this collaborative ideal is permeating the offshore landscape. This is leading to improved project economics for both operators and service and supply companies. For example, TechnipFMC has tripled the amount of integrated FEED activity since Forsys was started in 2015, and in its most recent analyst presentation alluded to substantial decreases in the footprint, part complexity, and installation time of subsea production facilities. The company also expects 25% of its 2018 inbound orders to be from this new business model. For Schlumberger’s OneSubsea business, 30% of all tenders require input from Subsea 7, the company’s JV partner.

The advancements are not limited to hardware and EPC providers – the offshore drillers are in the game as well. Transocean is now drilling deepwater wells 20% faster as are several of its peers. Borr Drilling and Schlumberger have an agreement to offer integrated, performance-based drilling contracts in the jackup market. The idea is to leverage Schlumberger’s scale and expertise with Borr Drilling’s modern jackup fleet. Halliburton and Aker BP also recently entered into separate alliances with Maersk Drilling and Odfjell Drilling, forming a “one for all, all for one” collaboration model also using jackup and semisubmersible rigs, respectively. Stay tuned as we expect more alliances to come.

We stand now at the beginning of what we believe will be a long, sustained offshore upcycle. The offshore markets did not die. They innovated and changed. And now a leaner and more sustainable business model abounds, one that is built not only for the current upcycle, but also for subsequent periods of volatility.

We can safely say that the offshore markets are through the bottoming process and an upturn is beginning to unfold. While the upturn may be methodical and somewhat slow in the beginning, better days lie ahead.