Higher oil prices have provided a boost to transactions for the ‘second-hand’ offshore drilling rigs market. Demand is strong for all classes of modern rigs, but prices of recent deals have varied, partly influenced by buyers’ differing perceptions of regional needs. The most desirable rigs appear to be harsh environment semisubmersibles, particularly those suited to work on the Norwegian continental shelf. 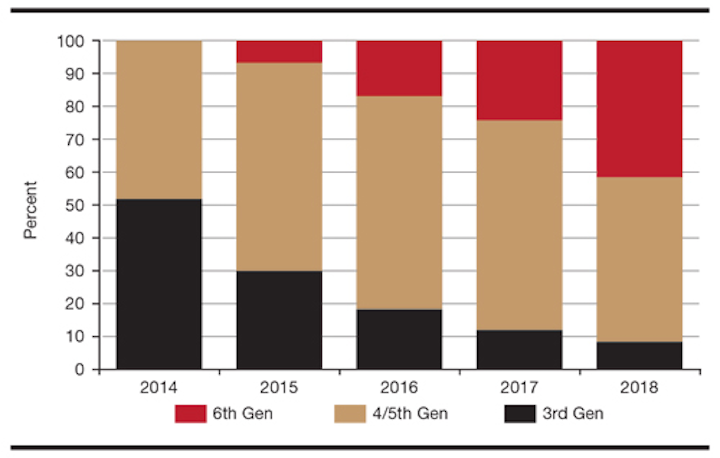 The second-hand offshore rig market is gaining momentum, with recent transactions establishing price levels across all classes of modern rigs. The most desirable assets appear to be harsh environment semisubmersible rigs.

As an example, the recent purchases of the newbuild semisub Stena Midmax and the West Rigel (the former by Odfjell Drilling, the latter now part-owned by Transocean), for prices in the region of $500 million, imply a premium of 18% on, for instance the price Awilco Drilling agreed to earlier this year with Keppel FELS for a newbuild CS60 ECO MW semisub for the Norwegian sector.

Values of high-spec jackups too have risen significantly this year, in contrast to late 2016 when, for example, Borr Drilling acquired two three-year-old jackups from Hercules for a sum that implied a discount of around 60% on the newbuilding price at the time. The same does not apply, however, to drillships, with John Fredriksen-owned Northern Drilling’s latest vessel acquisitions implying a depreciation of around 30% on the newbuilding price. 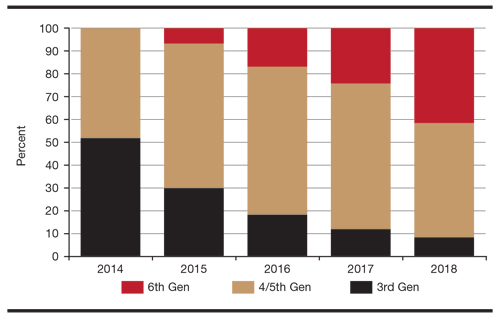 One consequence of the challenging market conditions is the changing profile of the cold-stacked rig fleet, as illustrated here. (All images courtesy MSI)

The concept of relative discount on replacement cost is critical in accurately valuing mobile offshore drilling units in illiquid markets. The price established by Northern Drilling’s recent transaction with DSME in South Korea for the newbuild ultra-deepwater drillships West Aquila and West Libra (ordered originally by Seadrill) was within $2 million of MSI’s 2018 estimated figure, despite the fact that there had never been a comparable transaction for a drillship re-sale.

The Northern Drilling transaction is particularly interesting, because the deal is structured so that the company can take delivery at any time up until 2021, which means it is not subject to the same stacking costs that other would-be buyers for drillships might face.

Effectively, the present differential of over $200 million between the valuation of a harsh environment semisub and an ultra-deepwater drillship is purely attributable to buyers’ perspectives on the outlook for each market. So, is the hefty differential warranted? It all comes down to risk. The harsh semisub transactions that have taken place of late have been largely pitched at the Norwegian market; but this region is a special case, due to its high standards of compliance for rigs. 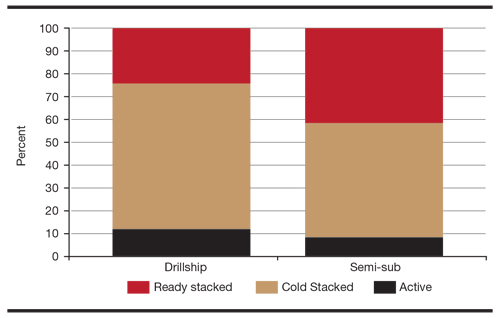 Contrasting the status of all existing sixth-generation drillships and semisubs.

The present steady volume of work in the Norwegian North Sea and Norwegian Sea, coupled with the likelihood of displacing aging compliant rigs, means that buyers of rigs targeted for the Norwegian market are banking on high utilization, with the prospect of continued opening up of the Barents Sea adding upside to rates. By contrast, drillship owners are contending with oversupply, with modern assets in lay-up and multiple newbuild drillships nearing completion at the yards.

However, the drillship market does offer some promise, at least under a high oil price scenario. Latin America and West Africa, for instance, remain key markets, and geographically appear to be two of the most sensitive regions to oil price swings in terms of increased offshore activity.

Assuming that the oil price stabilizes over the longer term at around the $70/bbl mark and the political situation in Latin America and West Africa does not deteriorate, the values of the two drillships purchased by Northern Drilling could appreciate by around $130 million each over the coming five years. Of course, a lower oil price would also leave drillship owners bleeding, although the ability to leave the rigs in the yard does at least offer Northern Drilling some downside protection over the near term.

For owners with assets already on the water, the decisions which they face are starker. While sentiment may be turning, outside the harsh environment rig market the current fundamentals remain weak. The deteriorating market has increasingly distorted the profile of the cold-stacked rig fleet, with sixth-generation rigs increasingly represented in this category. 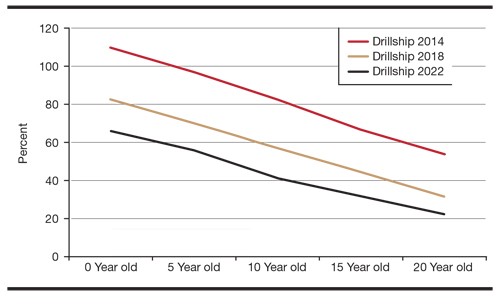 Depreciation curve for a drillship in today’s market, compared to the last of the boom years, with MSI’s projection for a partial recovery by 2022.

At the same time, larger operators are looking to clear out significant numbers of older semisubs and drillships, which explains the decline in stacking of fourth- and fifth-generation floaters. However, the number of sixth-generation floating rigs stacked has also increased, with eight or more sixth-generation floating rigs stacked at end-June 2018 than 12 months earlier. This suggests that while there has been an uptick in major new development projects, oil companies are managing to do more with less and the increase in projects has yet to translate into large-scale rig reactivations. Instead, operators of sixth-generation rigs continue to navigate an oversupplied market with limited demand. This issue is particularly problematic for drillship operators.

While the ratio of stacked to active drillships is only marginally higher than for semisubs, a greater proportion are ready stacked, largely because cold stacking a drillship is more complex and expensive than for a semisub. As a consequence, daily operating costs for these ready-stacked vessels are $40,000/d as a minimum, compared to $10-20,000/d for a cold-stacked asset with dynamic positioning (moored semisubs typically cost less to stack).

DP floater operators face a carrying cost to owning a ready-stacked asset of $15 million per annum, and this situation has inhibited transactions for assets on the water. It also explains why many of the recent transactions for floaters hinge on the ability to keep the rigs preserved in the yards for a significant period. It is this carry cost which is so significant in depressing the value of dynamically positioned floaters in today’s market.

While the signs are that the market will remain weak into 2022, with prices for newbuild rigs remaining below replacement costs, there are also positives: the extent of the recent recovery could mean that in 2022, a five-year-old asset will likely be worth comfortably more than a newbuild drillship today. That scenario is largely driven by the carrying cost: so if, like Northern Drilling, a contractor can transfer that carry cost to the yard, there could be tidy profits to be made.

It also illustrates how much attention potential investors must pay to more than simply purchase price when considering acquisitions in an illiquid market. The potential region of deployment, the complexity of the intended project itself, and the extent to which the buyer can take advantage of vendor distress must all be taken into account if the buyer is to manage the financial risk . •

James Frew is Director of Consultancy at MSI. He has been covering the offshore markets since 2007 and joined MSI in 2010. He regularly undertakes bespoke consultancy and research projects for clients in the offshore market including oil companies, asset owners, shipyards financiers and lawyers. Prior to joining MSI, James studied for an MSc in International Trade, Finance and Development at Barcelona Graduate School of Economics. Previously he worked as an analyst at Clarksons Research.