The ability to control the downhole environment while drilling has been a dream long held by drillers and reservoir engineers alike. 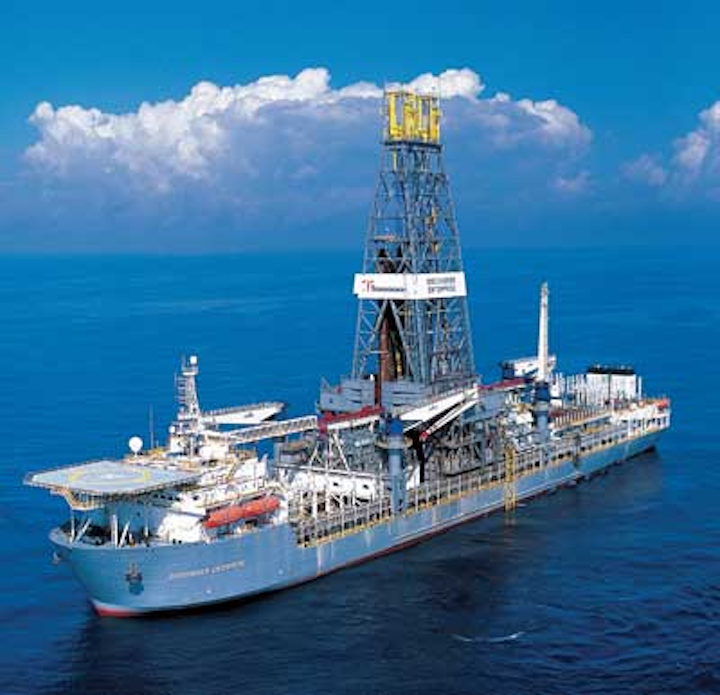 The ability to control the downhole environment while drilling has been a dream long held by drillers and reservoir engineers alike. In the not too recent past, drillers focused on preventing influx of formation fluid or gas, and weighted-up their mud accordingly. Of course, this risked loss of circulation should an unstable or highly faulted formation be penetrated. As a result, drillers found themselves literally between the proverbial rock and a hard place.

As explorationists made discoveries in areas characterized by high formation pressures and low strength formations, the difference between hydrostatic pressure and formation pressure became quite narrow. Understanding this parameter, known as the "drilling margin," became critical to a successful campaign.

Conventional wisdom developed by years of experience showed an inverse relationship between mud weight and rate of penetration (ROP). Too heavy a mud weight slowed the penetration rate. But operating with too light a mud weight invited surprises in the form of kicks. At the time, a technology innovation known as the rotating control head (RCH) was introduced. This device allowed drillers to balance mud weight with pore pressure, and drill very close to the lower end of the drilling margin. The result was better drilling efficiency and greater ROP. The RCH provided the margin of safety needed to mitigate any surprise kicks.

In the early 1970s, record depth wells were actually drilled underbalanced. In West Texas and Oklahoma, it was deemed safe to drill with light brine in the hole to maximize drilling efficiency in the world's deepest wells at the time. Essentially, the wells were continuously venting gas, but formation permeability was so low that volumes were relatively insignificant.

Up to this point, hydrostatic pressure and formation temperature were derived by measuring static mud weight and viscosity at the surface and calculating a pressure gradient which could be extrapolated to bit depth. Formation temperature was also calculated from a gradient. Neither parameter was precisely known. In addition, every time the mud pumps were stopped to make a connection a pressure surge was initiated when the pumps were re-started. In a formation with a tight drilling margin, this pressure spike could break down a weak spot and cause loss of circulation. Conversely, when the drill pipe was pulled to make a bit trip or even a short trip, care had to be taken not to swab-in the well.

The advent of measurement-while-drilling (MWD) changed everything. Downhole sensors could measure instantaneous pressure and temperature at the bit and transmit those data uphole using mud pulse telemetry. For the first time, drillers had access to the real-time pressure and temperature environment at the toolface. Regardless of the static mud weight, the dynamic pressure it imposed at the bit became known as the equivalent circulating density (ECD).

The rotating control head continues to provide an essential safety component to any managed pressure drilling system. Particularly in many offshore environments, very tight drilling margins persist, and even the ability to measure and monitor ECD in real-time, as well as both annular pressure and internal mud pressure at the bottomhole assembly, does not completely prevent surprises.

Cutting-edge techniques, sustained by innovative technology, are increasing the industry's ability to safely and efficiently drill unstable formations in deep- and ultra-deepwater. Two of the latest innovations are dual-gradient drilling and pressurized mud-cap drilling.

Particularly effective in very deepwaters, dual-gradient drilling essentially eliminates the effect of the water, so the drilling rig behaves as if it were on the seabed. This allows safe drilling of extremely fragile formations just below the mudline. It also potentially extends the depth range of the rig. Presently the technique is being championed by Chevron and Transocean.

One prime benefit of dual-gradient drilling is the elimination of some casing points and the resultant reduction of casing sizes. With narrow drilling margins, a single-gradient drilling mud column could necessitate five or more casing points to reach total depth. However, if the pressure at the seabed could be reduced from that created by 10,000 ft (3,048 m) of heavy drilling fluid, to that created by 10,000 ft of seawater, maintaining a safe drilling margin is simplified to the point of reducing the number of casing points by as much as half.

Since each casing point necessitates a reduction in hole diameter, it is potentially possible for a well that starts off with a 36-in. conductor to be so small by the time it reaches the target formation that the required completion cannot be installed.

In the traditional dual-gradient scheme, a cuttings processing unit is added at the seabed to process drilling fluid returns to reduce the size of entrained cuttings so they can be easily pumped. A seabed pump lifts the processed fluid to the rig via a flexible hose where it is passed to the shale shakers and degassers in normal fashion before being returned to the suction pit. The critical RCH is positioned atop the subsea BOP and lower marine riser package. The closed system allows drillers to quickly control annular pressure in the drilling fluid for managed pressure drilling purposes, and continuously drill within a safe margin.

The dynamically positioned drillshipPacific Santa Ana is the first to offer the traditional dual-gradient drilling option. It is currently under contract to Chevron.

Transocean has developed a different process that it claims can be installed on any of the company's drilling units. Called continuous annular pressure management (CAPM) the technique involves injecting diluted drilling fluid into the mud column at the seabed to maintain the desired ECD. No seabed pumps are required. Essentially the riser annulus is filled with diluted drilling fluid to reduce hydrostatic pressure at the mudline. Processing takes place on board the drilling rig. As mud returns arrive at the rig, they pass through the standard shale shakers, desanders, and degassers; then they are processed by a battery of centrifuges that remove the weighting material, commonly barite or hematite. The remaining heavy component is pumped down the drill pipe to the bit, and the lighter component, typically with a density of 6-9 ppg, is pumped back to the seabed and re-injected into the riser annulus there. The effect lowers the hydrostatic pressure at the seabed to near that of seawater. Transocean has deployed the first CAPM unit on itsDiscoverer Enterprise high-specification drillship.

All CAPM components are modular, and can be installed on any rig, including a land unit. Both the Chevron and Transocean systems include a device called a flow-stop valve to keep the fluid from U-tubing when circulation is stopped to make a drill pipe connection. Both systems permit the unrestricted transmission of mud pulses typically used for transfer of logging-while-drilling (LWD) data and geosteering commands.

A solution for carbonates

Carbonates are hard to drill and harder to evaluate. They can range from oolites, which exhibit high porosity but zero permeability, to highly fractured zones that can produce like a fire hose or drain drilling fluid like a storm sewer. Drillers have tried to develop the best practices for drilling these highly heterogeneous rocks safely and efficiently. They may have succeeded.

Three years ago, Petronas Carigali faced a very challenging situation offshore Sarawak. Drilling surprises, in the form of highly conductive fractures, threatened loss of well control when they were encountered. They proposed a solution called pressurized mud-cap drilling (PMCD) that basically involves pumping sacrificial seawater through the choke lines and down the annulus to bull-head influxes back into the fracture system. The solution prevents loss of valuable drilling fluid, and seals the influx by pumping back the cuttings entrained in the annulus into the offending fracture system. The seawater can be mixed on the fly with viscosifiers to prevent gas migration.

Previous experience ruled out the use of traditional lost circulation material. It created more problems than it solved in the form of permanent formation damage that inhibited production.

A key piece of equipment is the RCH which seems to be an essential component to all solutions. Petronas elected to drill with a mud motor to minimize drill pipe rotation and any associated wear and tear on the RCH seals.

Drilling decisions focused on extending bit life to the maximum rather than maximizing ROP. This was accomplished by using less-aggressive bits to mitigate vibration which is the leading cause of bit wear. Float valves were installed just above the drill bit to prevent the loss of drilling fluid and to force the seawater mixture and cuttings coming down the annulus to enter the fractures.

The operator selected an 11-well drilling campaign to verify the PMCD concept, qualify the equipment and fine tune the procedures. Drillers would never know when or if they were going to encounter severe fluid loss; this is why a multi-well test was implemented.

Of the 11 candidate wells, six exhibited severe fluid loss. The campaign was deemed a success because lessons were learned to be applied to future carbonate drilling projects. The basic premise of PMCD was proved effective, and the company is continuing to drill carbonate formations using this technique. Use of a dedicated PMCD rig was clearly deemed to be essential. The experience was used to make the procedure easier to implement, facilitate crew training, and improve safety. For example, it was suggested that each subsequent campaign start with a vertical pilot hole to acquire vital log information that could allow prediction of lost circulation issues. A log to determine reservoir pore pressure in advance was thought to be essential. It was also deemed advisable to deploy a floating mud plant to mix the seawater on the fly, so as to ease logistics concerns.

The ability to measure precisely and monitor continuously the equivalent circulating density of drilling fluid at the bit is crucial to success. This single ability has allowed major strides in drilling technology that have affected safety, cost effectiveness, and efficiency. Many, if not most, of the previous surprises can be traced to inaccurate estimations of dynamic downhole conditions.

Like most critical undertakings, prior planning is a given. Even modular systems that are relatively easy to implement on a standard drilling unit must be carefully sized and can benefit from as much prior reservoir knowledge as possible. The benefits are substantial and well worth the planning effort. The term "managed pressure drilling" describes precisely what is required. Only when pressure can be proactively managed, not reactively dealt with, can the industry proceed safely to develop today's frontiers.