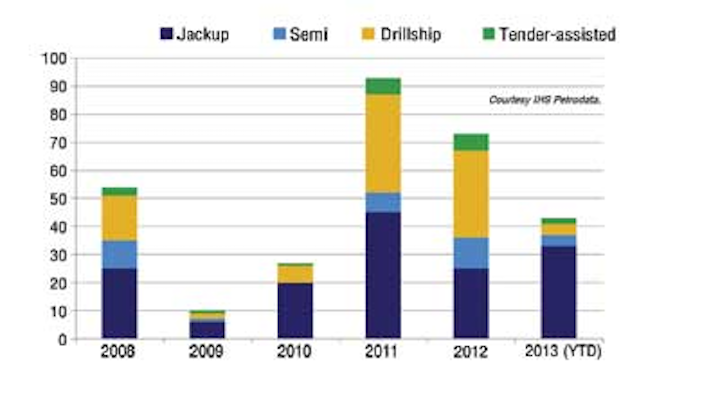 Since June of last year, 81 rigs have been ordered, with 43 of those orders coming in since January 2013. The majority of the past year's orders have been for jackups. Rig owners have secured 45 slots at shipyards for new jackups. A closer look at the jackup orders reveals only two commodity units rated for less than 300 ft (91 m) of water. One is for China's Shengli Offshore, a subsidiary of Sinopec, and the other is for Teniz Burgylau, a subsidiary of KazMunaiGas, which is the national oil company of Kazakhstan. Three orders are for 300-ft independent-leg cantilever units. One is for China Petroleum Liaohe Equipment Co., or CPLEC; one is for China's Shanghai Zhenhua Heavy Industries, or ZPMC; and the third is for Singapore's KS Drilling.

The remaining 42 jackup orders are for premium rigs rated for 350 ft (107 m) or more. This reflects a growing preference by operators worldwide for newer, higher-specification equipment.

Shipyards sometimes plan ahead based on market intelligence and start building a rig on spec with the intention of selling it to another party. This allows them to keep their skilled labor working and also provides the future owner with a unit that will be delivered much sooner than if construction was starting from scratch. In December, PEMEX, Mexico's state oil company, hired Keppel FELS to build two units for it directly. In addition, several Mexican rig contractors are also building jackups aimed at the Mexican market in an effort to help PEMEX achieve its operational expansion goals.

As these units are delivered, some of the older jackups in the worldwide fleet are being retired from active duty or cold-stacked. Over the past year, nine jackups have left the fleet, only one of which was due to an accident. The others were converted into non-drilling production units, scrapped, or simply retired. The hulls of these nine units were built between 1975 and 1983, placing them all at 30-plus years old. As of early June, there are 289 jackups with a year-in-service date of 1983 or earlier. Attrition is expected to increase over the next several years as rig contractors modernize their fleets with newer rigs.

While many of these older rigs are cold-stacked or out-of-service, this is not to say that operators are unwilling to charter older units. As a matter of fact, the oldest currently-working jackup has a year-in-service date of 1958.Hercules 120, a 120-ft (36.5-m) mat cantilever unit, is working in the US GoM and is firmly committed until the end of this year. The next oldest working jackup is Al Borz, which was in service in 1968 and is working offshore Iran.

Besides deeper water depths, another trend regarding newbuild floating rigs is a preference for drillships over semis. While there are still more than twice as many semis in the world as drillships, most of the floating rig orders over the past five years have been for drillships. Between 2008 and 2012, rig owners ordered 90 drillships, versus just 29 semis. It will take some time, however, for the current supply of 87 drillships to overtake the global semi count of 217.

A significant number of the floating rig orders are from Brazilian companies targeting the Brazilian market and looking to meet the high local content requirements. Etesco, Odebrecht, Queiroz Galvao, and Sete Brasil have placed new rig orders over the past year, resulting in about 15 total floating rigs, all of which are set to work for national oil company Petrobras. Altogether, only 13 of the 32 floater orders were placed on a speculative basis, without a firm contract already in place; one of those units has since been chartered. This leaves little negotiating room for operators still looking for new deepwater units over the next few years.

Turning to the tender-assisted rig market, only four orders have been placed over the past year. BassDrill ordered two, bringing its total fleet to four units. Energy Drilling Pte. of Singapore and Norwegian newcomer Pentacle each ordered one unit.

Focusing on the places that will be building these rigs, China, Singapore, and South Korea will be constructing over 70% of the rigs ordered over the past year. Chinese yards were the biggest winner, with 29 confirmed orders, followed by 16 for Singapore yards and 14 for South Korea. Other countries set to build rigs are Azerbaijan, Brazil, Indonesia, Kazakhstan, and the United Arab Emirates.