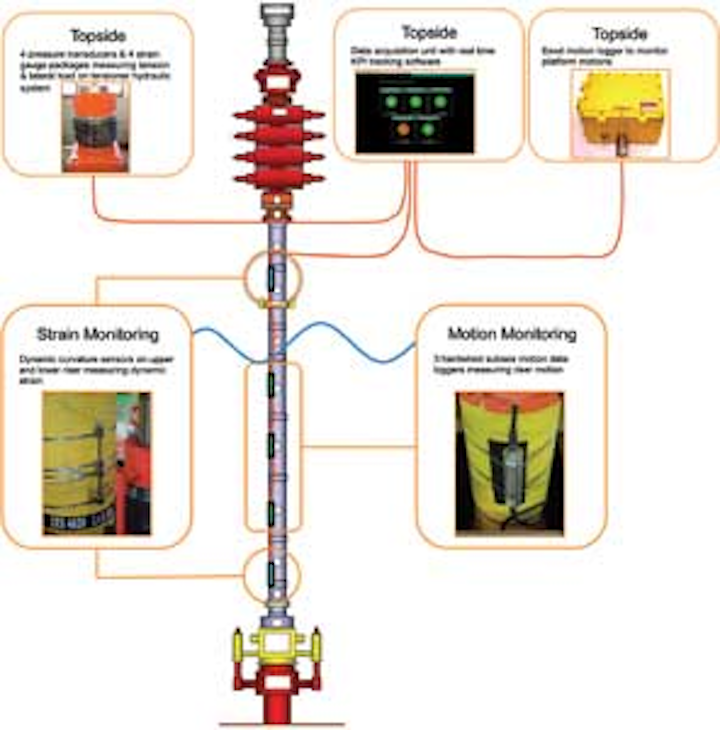 Drilling in harsh environments imposes strains on risers, conductors and wellheads. Stress levels can be predicted, but results don't always match the reality of prolonged exposure to buffeting waves and surging currents. This is a major concern in frontier deepwater regions with little prior drilling history, and also for operations pushing the boundaries of jackup drilling in established hostile plays.

It is possible, however, to define and then refine the parameters for safe drilling based on information from the field. This is what Acteon companies 2H Offshore Engineering and Pulse Structural Monitoring (Pulse) are doing on current projects involving jackups in the North Sea and deepwater rigs operating West of Shetland and offshore East Africa.

2H was formed in the early 1990s, a time when knowledge of riser motions and interactions with conductors was very limited and assessment processes were very simplistic, according to director John McGrail. Over the years since the company has been at the forefront of evaluating new types of drilling and production riser systems, and promoting the need for structural monitoring to consolidate design knowledge with measurements offshore.

In the late 1990s 2H created a monitoring division for this purpose which developed the INTEGRI range of sensors and data loggers. These were first deployed in 1998-99 on steel catenary risers for the Allegheny platform in the Gulf of Mexico as part of the STRIDE joint industry project. Around the same time, the UK-based UWG group acquired 2H, rebranding itself as Acteon in 2005. Five years later, due to the growing scale of 2H's activities, the monitoring division was turned into a separate company, Pulse, providing complete structural monitoring solutions.

In the Norwegian North Sea, Statoil has Seadrill's newbuild heavy-duty jackupWest Elara on a long-term assignment, drilling new wells or performing workovers. Two recent wells on the Gullfaks field required use of a high-pressure riser in 132 m (433 ft) water depth, around 30 m (98 ft) above the typical limit for jackup drilling. All four Acteon companies co-operated to develop a detailed design and engineering solution, with Claxton managing the project and SRP manufacturing sections of the riser and supplying the spider.

The relatively deep water, and the potential for fatigue brought on by year-round drilling in a region characterized by sustained current and wave loading, complicated the design, as did the 12,000-psi (827-bar) specification - 3-5,000 psi (207-345 bar) is more typical for North Sea operations. Well control considerations during HP operations also necessitate use of a large BOP, which increases the loading on the riser.

Drilling risers are designed to minimize the risk of failure and to comply with design codes and standard safety margins. But when the local operating factors are not well understood, the conventional design approach often veers towards caution. "The challenge in this case," McGrail explained, "was to more accurately evaluate the global response of the HP riser and the knock-on loading effect on the subsea well conductor and the interface to the jackup topsides at the Texas deck. The increased size and stiffness of this type of riser means that high conservatism in predictions cannot be tolerated in the system design."

The analytical predictions of the riser response raised concerns over long-term fatigue performance, particularly with regard to loading on the subsea well conductor. "This forms the foundation of the well, and yet it can't be inspected. So integrity of the well conductor is a paramount concern, as is any fatigue damage in the drilling riser - typically the client expects to re-use the riser for 10 years or longer."

Analytical findings indicated that measures to improve the fatigue response of the riser were required that included adding special fairings to reduce vortex-induced vibration (VIV); employing forged rather than welded joints in high-stress and fatigue-prone areas; and upgrading the tensioning system to 500 t. In addition, a riser response monitoring system was necessary to validate the analytical predictions and confirm that the riser was responding as expected.

"To define the requirements of the riser monitoring system we start by identifying key performance indicators [KPIs] by which we categorize the system response," McGrail explained. "Based on these KPIs we develop specifications for what we think should be measured, to validate behavior during drilling operations. We may recommend measuring the level of strain, deflection or acceleration at different points of the riser to most accurately understand the system behavior.

"The extent and complexity of monitoring must be acceptable to the client, but we must also ensure that our clients have a clear understanding of their own objectives for the monitoring, and whether these are primary or secondary objectives. Their main goal may be to not exceed a critical loading or deflection limit during an offshore operation; however, validation of analytical predictions to improve the overall understanding of the behavior of such systems may also be important."

For theWest Elara instrumentation system, designed and supplied by Pulse, Statoil opted for online monitoring via subsea sensors to provide real-time processing of measured data, including fatigue build-up and loading on the riser and tensioning system. Motion sensors were also placed topside, to enable the motions of the rig itself to be determined, and the impact on the riser measured.

The system involved a hard-wired connection to the rig, configured in a traffic-light format with KPIs built into the software. "A green light indicated that all parameters were within normal limits," said Pulse Marketing Coordinator Edward Elletson. "If one parameter was outside specification the amber light came on, while a red light showed if any parameter was outside the critical operating limits." McGrail added: "The client's objective was to have real-time assurance of safe operations. Statoil recognized that this operation was beyond the typical envelope for jackup drilling. In deeper water, it is expected that a jackup would move around a lot more, and when combined with the harsh environment and high pressures involved in this development the additional assurance provided by a real-time monitoring system was key to managing risk."

Pulse's system provided acceleration and strain monitoring of the riser response, to measure the effect of wave loading and identify whether currents that might shed off the riser were causing oscillations. "We monitored wave and current, and compared the motions in the riser and the rig," Elletson explained. "In the lower part of the riser we had strain monitoring which could be used to evaluate wellhead fatigue. If we know the level of strain in the riser, we can infer strain on the conductor. And from the number of strain cycles we can calculate accurately the ongoing accumulation of fatigue damage in critical components."

"The measurements obtained provided a good correlation with 2H's prediction in terms of fatigue accumulation, and from the findings it is possible to define the factor of conservatism in the analytical prediction" McGrail said. Statoil plans to use the data to gain greater assurance and confidence in using HP drilling risers in similar settings, and Pulse has recently finished a follow-up monitoring campaign forWest Elara on the Norwegian Valemon field.

2H and Pulse have also devised and deployed systems to monitor deepwater drilling riser VIV responses in high current regions such as West of Shetland and offshore Tanzania and Mozambique. Aside from being frontier E&P regions, there are similarities in operating conditions.

West of Shetland conditions are most severe, with strong currents channeled from the Atlantic Ocean due to the location in between the UK continental shelf and Faroese plateaux. Current velocities can regularly exceed 2 m/s (6.6 ft/s), and the area has strong tidal flows.

According to Elletson, in these regions VIV behavior is often observed on the semisubmersible rig's marine riser during drilling, raising concerns about the impact on the subsea well and conductor. And most predictive tools, McGrail added, employ relatively simplistic approaches modeling the complexities of VIV-induced lock-on (the process by which current vortex shedding around the riser pipe can excite vibration and riser modal vibration frequency). So with Pulse, 2H have delivered monitoring campaigns to capture and evaluate the actual occurrence of VIV on drilling risers: the main aims are to use the data to predict the accuracy of VIV onset with measured currents and to determine the impact of the drilling campaign on the conductor's fatigue life.

"Using the readings from the Pulse data loggers we can accurately measure acceleration of the drilling riser," McGrail explained, "and from this we can determine how VIV response varies in amplitude on the riser in particular currents. We often find that while the modeled response is accurate in determining how frequently VIV may occur, often the magnitude of the VIV response is over-estimated."

Other major operators have commissioned further studies for their East Africa programs. Here the deepwater drilling locations (up to 3,000 m, or 9,842 ft)) are sandwiched in between the East African coast and the island of Madagascar, forming a large channel. Warm water from the northern Indian Ocean is forced through this channel to cooler water offshore South Africa, leading to very strong currents.

Pulse has provided instrumentation in this region for two operator's ongoing exploration drilling campaigns to gauge the severity of VIV response. "This is a frontier area, meaning that little data existed previously," Elletson explained. "Where environmental data is lacking, analysis must cover this with sufficient safety margins."

One system supplied comprised 11 motion data loggers capable of measuring tri-axial acceleration and 2° angular rate, with magnetic interfaces for ROV deployment and retrieval. Loggers are distributed along the riser and on the BOP stack, with two precision accelerometers for BOP monitoring. Measurements are used to calculate inclination, VIV, linear displacement, and acceleration of the BOP and drilling riser.

While the results do not have an immediate bearing on the current exploration drilling, the information gathered on the currents and riser response will be of benefit in planning future drilling activity and the design of the wells which will be required for upcoming developments in these areas.