Deepwater well construction is all about planning and logistics. 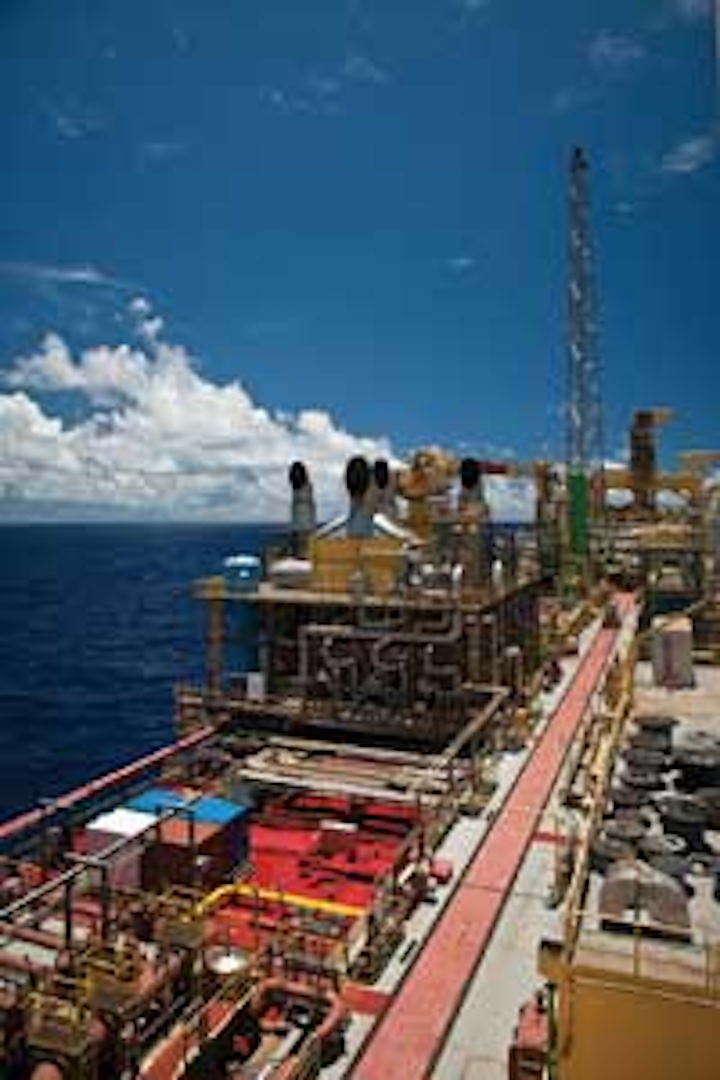 Deepwater well construction is all about planning and logistics. Typically, if these two challenges are not handled flawlessly, they can cause more issues than drilling and completion. Experts tell us that the best results evolve from "backwards planning" meaning that operators start with the desired end result and work backward to plan each facet of the operation, determining when orders must be placed and deliveries to the well site made. Even so, the experts warn that contingencies must also be built into plans because Murphy's Law will undoubtedly prevail if contingencies are not planned for.

Companies with experience in deepwater development have found that they get the best performance when they organize a tight-knit project team who work together. Like a fine symphony orchestra, if each musician performed as an individual without regard to what the rest of the orchestra was doing the result would be a chaotic cacophony of noise. However, by following the musical score, a beautiful result is obtained. So it is with deepwater well construction.

Many of the tasks of deepwater well construction are the same as those performed on a typical land well. However, the risks are greater, and there can be significant issues that, while similar to those addressed in land jobs, are different when performed in the marine environment. In addition, there are a few issues that are only found in marine operations.

To an untrained observer, many of the tasks associated with deepwater well construction may seem out-of-place, but they are all part of a well-orchestrated plan that will culminate in first oil.

In 2006, Shell began the execution phase of a massive ultra-deepwater project involving the drilling of several wells to develop the initial phase of a multi-reservoir field offshore Brazil. Called the BC-10 project, the site is about 75 mi (121 km) south-southeast of Vitória, Brazil. Exploration had identified five stacked reservoirs in fairly close proximity in water depths ranging from 4,600 ft to 6,500 ft (1,400 m to 2,000 m). All reservoirs were sandstone-dominated turbidites, and initial planning led Shell to choose a subsea development scenario producing to a single floating production facility.

The initial well construction plan separated activities into three concurrent phases: acquisition and build-out of an FPSO, design and implementation of a subsea production system, and well construction. A fourth phase dealt with commissioning and first oil. Shell had to manage an intensely complicated logistical plan to ensure that each phase was ready at the same time.

Everything began with the contract award in October 2006. Design and procurement activities for the FPSO began immediately and included the hull, turret, topsides, and mooring spread. Construction of the first three of these was accomplished in Singapore with significant deadlines that included inspection and commissioning. Sail away was scheduled to ensure timely arrival onsite. The successful accomplishment of all this work was the result of reverse planning. In the case of mooring, design and fabrication had to be preceded by geomechanical surveys of the seabed to determine the best places to install the nine anchor piles. Once this prerequisite was accomplished, the mooring subcontractor was able to design and fabricate the anchoring systems and pre-install them, which was accomplished in the summer of 2008, about six months prior to the ship's arrival. The pre-installation of the anchor systems allowed time for them to stabilize.

The subsea system consisted of pipelines and flowlines, electro-hydraulic umbilicals, and subsea hardware that included subsea wellheads and trees, pipeline end terminations (PLET), production manifolds, and artificial lift manifolds (ALM). Because of the complexity of trying to produce multiple reservoirs at once, the subsea system phase required considerable design and fabrication time. After design and fabrication, these elements were delivered to the site on a tight schedule, just in time for installation, which had to be coordinated with the drilling and completion program. In order to have them ready for arrival of the FPSO, production risers, which had earlier been manufactured and coated onshore, were towed to location and laid in reverse order of pull-in on the seabed. They had to be positioned where they would not interfere with other subsea components including the wells themselves. In the case of the umbilicals, prototypes had to be built and tested before final manufacturing took place. Production manifolds had to be connected to the PLETs and the ALMs using jumpers and seabed lines.

All these activities were coordinated with the well construction phase. Like the others, well design is a backward process. Engineers decide the type of completion hardware they need based on anticipated volume and composition of produced fluids. This determines the size of production casing at total depth. Then the drilling and casing program must be designed from the bottom up with contingencies built-in to address unplanned well conditions that require intermediate casing points. Two rigs were used to drill the wells. The first rig drilled exploration and appraisal wells. The second rig batch-drilled the production wells. Nine production wells were drilled and completed, tapping three of the four reservoirs in Phase 1.

Shell drilled with a dry stack, the first time this has been attempted in ultra-deepwater. The design called for a seabed emergency shut-in device with both shear rams and variable-bore pipe rams. High-pressure risers connected the seabed assembly to the dry stack aboard the rig. A telescoping joint allowed for heave and tidal variations. The reason such a scheme was used was that it effectively doubled the rig's water depth capacity. The system was used for both drilling and completion activities. Vertical wells were drilled; then kicked off and geosteered to reservoir targets using a point-the-bit rotary steerable system (RSS). Engineers believed that top hole quality played a major role in the ability to achieve success with the extended lateral sections. According to Shell, the use of RSS enabled rate of penetration to be increased by a factor of three over traditional mud motors, and resulted in smoother trajectories and fewer problems when setting pipe. Because the top hole sections traversed unconsolidated strata, the drillers experienced difficulties building and holding dogleg with mud motors, so they switched to RSS. Admittedly more expensive, the RSS' exceptional performance outweighed the added cost.

All development wells were batch-drilled in three phases with all vertical top holes being drilled and cased, followed by all intermediate holes, which contained the build sections and landed in the target reservoirs. Lastly the laterals were drilled. Batch-drilling proved to be highly efficient. The benefits of batch-drilling included achieving a better "feel" for maintaining the correct equivalent circulating density (ECD) in the laterals where drilling margins were tight. A constant concern was that of maintaining optimum ECD to minimize formation damage that could affect subsequent well performance under production. The crew was also able to make mid-course trajectory and azimuth corrections based on real-time observations from the LWD string to penetrate reservoir "sweet spots." Wells were completed using lateral gravel packs and screens with inflow control devices. As part of the reservoir management plan, downhole gauges were installed. In addition, in anticipation of potential flow assurance issues, production umbilicals were provided with conduits for injection of remedial chemicals to mitigate possible problems.

Part of the plan involved constructing a tieback pipeline to transport produced gas away from the FPSO. Arrangements were made to tie into an existing subsea gas pipeline that ran nearby. After produced gas was separated from the flow stream on the FPSO, it was cleaned up and pumped down a dedicated gas riser to a seabed line that subsequently tied into the gas pipeline.

The BC-10 project epitomizes the thorough planning required for deepwater well construction. Operators are convinced that in many cases you only get one chance to construct deepwater wells correctly. Side tracks and deepwater interventions are extremely expensive not only for their cost, but also for the delay of production. The best way to deal with production problems is to prevent them in the first place. By maintaining focus on the desired end result, companies have a much better chance of achieving it. The BC-10 story is a classic example of how to do it right the first time.

For the BC-10 project, well construction was closely coordinated with completion, production, and reservoir management. All the while drilling was being conducted, the seabed production scheme was being executed, modules installed, tested, and tied together. The FPSO arrived onsite at the end of 2008 and set about pulling in the risers that had been previously laid on the seabed. By the time first oil was produced, both the seabed facilities and the surface production facilities were ready and tested. By following a detailed plan, clashes were avoided, and every contingency was handled. Deepwater drilling cannot be achieved in a vacuum.

The exploitation of deepwater and ultra-deepwater discoveries continues apace. Significant progress has been made in the Gulf of Mexico and offshore Brazil. Although the world record extended-reach wells of Sakhalin Island, Russia, have mostly been drilled from the island using land rigs, the challenges are quite similar to those encountered in deepwater reservoirs. Today, the deepwater drilling record has moved from the Gulf of Mexico to the Krishna Godivari basin offshore India where theTransocean Dhirubhai Deepwater KG1 ultra-deepwater drillship recently constructed a well in 10,411 ft (3,174 m) of water.