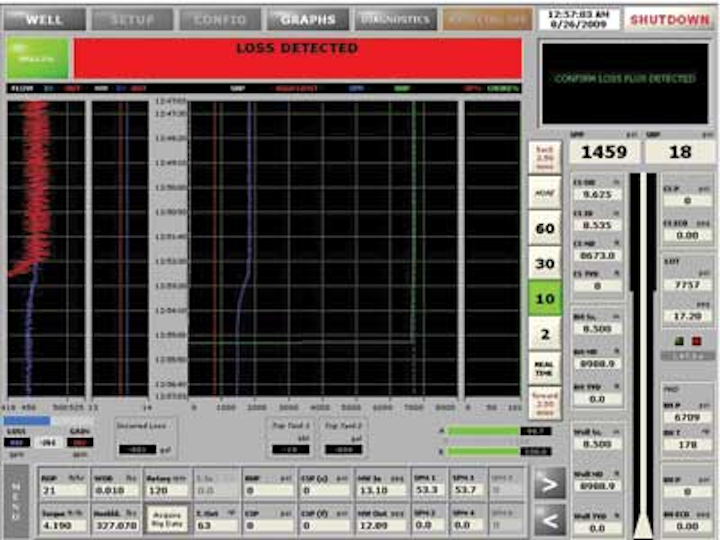 The first involves a cross-regional exchange. In extreme deepwater drilling around the world, MPD is notable for success in otherwise difficult (if not impossible) wells. These deepwater challenges – often related to narrow drilling windows, kick/loss cycles, stuck pipe, poor penetration rates, and total loss of circulation fluids – are similar to those found or anticipated in Latin American deepwater wells.

The other key experience is – experience. MPD is a long-time staple of onshore drilling in Latin America. Drillers in the region are familiar with MPD concepts and applications, and understand how it can be used.

That understanding paved the way for offshore adoption of MPD methodologies. Shallow-water applications, such as those in Venezuela, are routinely conducted in development and exploratory drilling.

As drilling moves into deepwater, this combination of global and local experience is driving the application of MPD methodologies. Initial successes in shallower waters and deepwater clearly demonstrate how flexible MPD methods will contribute to the growth of deepwater drilling.

The growth in Latin American deepwater drilling is well recognized and includes considerable interest and activity in Mexico, Trinidad & Tobago, Venezuela, Colombia and Brazil. Drilling activity has moved progressively deeper, on some recent wells as deep as almost 3,000 ft (914 m) of water.

This trend is illustrated by two wells: one a shallow-water exploratory well that describes the movement of MPD methods from land to offshore; the other in deeper waters that points to the future of MPD in exploiting new reserves under extreme conditions.

Uncertain pore pressures and fracture gradients were a key concern in drilling a 10,000 ft (3,048 m) exploratory well off the coast of Venezuela. Past experience had resulted in wellbores that fell short of the target reservoir.

The operator applied MPD methods from a jackup rig to drill the first well in the lease to reach the target. In its first use by the operator, MPD monitoring and control were instrumental in mitigating several loss events and critical to successful drilling of the well.

Real-time monitoring and control provided early identification of pressure related events such as ballooning, kicks and losses, and the ability to mitigate them very precisely using surface backpressure. The capability was critical in responding to changes in the pore pressure and fracture gradients that defined the well's uncertain operating window.

An important objective of the MPD application was to allow a safe reduction in mud weight to improve drilling penetration rates. With an MPD system, downhole equivalent circulating density (ECD) is managed by modifying backpressure at the surface according to pre-determined set points. This enables rapid response to micro variations in downhole pressure due to influxes or losses in the closed loop circulating system.

In the 12¼-in. hole, the MPD system created the required 16.4 ppg on-bottom ECD using a lighter fluid mud weight of 14.3 ppg and 500 psi by applying surface backpressure. Different ECD were achieved by decreasing backpressure from 500 psi to the natural backpressure rather than the time-consuming process of reducing the mud weight.

For the 8½-in. section, drilling began with the same approach used in the previous 12 ¼-in. hole with a mud weight of 13.5 ppg and 500 psi backpressure, which created an ECD of 15.2 ppg. This backpressure represented 1.15 ppg ECD at 8,700 ft (2,650 m). As predicted, the naturally fractured limestone resulted in a decrease in the mud weight from 13.5 to 10.8 to avoid loss circulation events and reach the 7-in. casing point.

Accuracy of the pressure sensors allowed early identification of normal drilling problems, such as mud pump problems, mud motors, and drill string torque. MPD measurements of flow also allowed identification of some problems not possible to detect at initial stages without the system, such as mud losses downhole or at surface, depleted zones, and influx.

Dedicated data interface panels on the rig provided the company man and driller with immediate access to collected data, including pump pressures, third pump stroke counter, and flows in and out. Access to all these parameters in real time enabled detection and filtering of most of the drilling events.

Data from the MPD system was provided on the rig and remotely. The system featured a database server with an Ethernet adapter that allows connection to the Internet when available. The server connection was used to transmit data from the rig to a central data server where it was available for analysis in near-real time. Plot graphs of the variables received by the system were quickly produced and used to identify many drilling problems.

A number of achievements were noted in drilling this well. Most critical was the ability to monitor and detect influxes and losses. This was the most fundamental benefit of the system. Its key point of advantage over conventional systems is creation of a closed loop system by enclosing the wellbore with a rotating control device (RCD), which allows accurate interpretation of pressure-related events. Once the drilling team developed confidence in the system, the MPD system was the only one that was relied on to initially determine the state of the wellbore and to regain control of the well after detection of a loss or an influx.

Losses and influxes were detected very early to avoid problems and prevent them from escalating. In addition to accuracy, the MPD system detects variations much more quickly than conventional circulating systems that are open to the atmosphere.

The ability of the system to measure micro-influxes and losses (< 2 bbl) provides two essential benefits: the influx or loss is minimized, and with quick and accurate detection, the drilling team is able to react properly and effectively, which increases safety and efficiency.

Drilling with applied backpressure avoided the need to increase the mud weight. As the industry's standard response to an influx, increasing mud weight is the only real tool a drilling team has if they are not using a closed loop circulating system.

Closing the loop with an RCD enables the application of backpressure. This addition to the conventional equation is a powerful component. On this well, it provided the drilling team with the ability to manage drilling parameters without increasing the mud weight.

A notable advantage of the MPD system was the ability to monitor effectiveness of lost circulation material (LCM) treatment while circulating the pill. Two total losses events occurred while MPD system was on site. Using reliable and highly accurate in-flow and out-flow measurements, the effectiveness of LCM on reducing losses could be seen in real time. As a result, the drilling team was able to minimize the amount of time needed to determine if the well had stabilized and thus resume drilling.

A more accurate understanding of pore pressure and fracture gradient was also a key benefit of the MPD system. One of the key findings was confirmation of the system's ability to test the upper and lower limits of the drilling window to more accurately determine the pressure regime.

The information is important to future wells in helping optimize the well design and drilling operations as much as possible. An excellent example of this occurred when a pore pressure test was conducted using the MPD system to gradually decrease the backpressure to determine the limit of the drilling window.

The first use of an automated MPD system in the Gulf of Mexico resulted in significant benefits to the success of the drilling operation. The well faced significant challenges familiar to offshore drilling, including variations in pore pressure, depleted reservoirs and in many cases, highly fractured carbonates typified by total circulation losses.

The primary MPD objective was to provide an alternative technology for reaching total depth in the 8½-in. production section with as little NPT as possible. In doing so, the automatic monitoring and response capabilities would identify and control undesirable events such as influxes, losses, and ballooning. The MPD system would allow strict control over bottomhole circulating pressure and find a balance point that would make it possible to minimize losses and possible influxes.

Well planners anticipated a number of NPT events, including drilling in the fractured carbonate where no operational window existed between pore pressure and fracture gradient. As a result, total circulation losses were expected, along with formation fluid inflows, differential sticking and low rate of penetration (ROP).

The MPD plan for dealing with these extreme conditions involved using a mud weight lighter than used in conventional drilling. The intent was to increase ROP, determine pore pressure, decrease excessive overbalance, and avoid formation damage.

In this effort, the automated MPD system was used to detect, control and circulate inflows through pore pressure determination. It provided early detection of circulation losses through fracture gradient determination. The system also detected and confirmed unexpected well events such as washouts and ballooning, and aided determination and maintenance of a constant bottomhole circulating pressure to reduce loss circulation and avoid inflows.

The drilling operation produced many noteworthy results. The MPD automated system allowed for the determination and automatic control of an influx at a depth of about 13,000 ft (4,426 m), without having to interrupt drilling operations. The influx was barely 1.5 bbl and was brought under control in less than two minutes. Once the influx reached the surface, it passed as only a small rise in annular pressure and a reduction in the exit density of the mud, as determined by the Coriolis flow meter as it marked the arrival of the influx at surface.

With the application of the automated control system, it was possible to determine a pore pressure of 15.4 ppg for the high-pressure formation.

The safety afforded by the automated system allowed operations to begin with a lower-density mud, equivalent to a pressure lower than that estimated for the gas cap, located barely 30 m from the casing shoe. In a conventional scenario, the mud density would have been overdesigned, and it would not have been possible to determine the pore pressure in real time.

Drilling the well with MPD methods reduced the potential for NPT incurred by well control procedures and maneuvers when drilling a high-pressure formation by conventional means. The occurrence of an influx is usually confirmed after a number of barrels have been gained, typically 10 to 20 bbl. The situation implies the need to quickly manage high pressures due to the gas peak produced when the influx reaches the surface, and the high risks inherently posed by these operations.

Improved drilling performance was another of the MPD benefits. The highest penetration rates are achieved when it is possible to drill with an ECD very close to the pore pressure. The MPD application drilled the 8½-in. section in only 26 days compared to 59 and 38 days for conventionally drilled offset wells. Penetration rates were as high as approximately 19 ft/hr compared to about 6 ft/hr in the offsets.