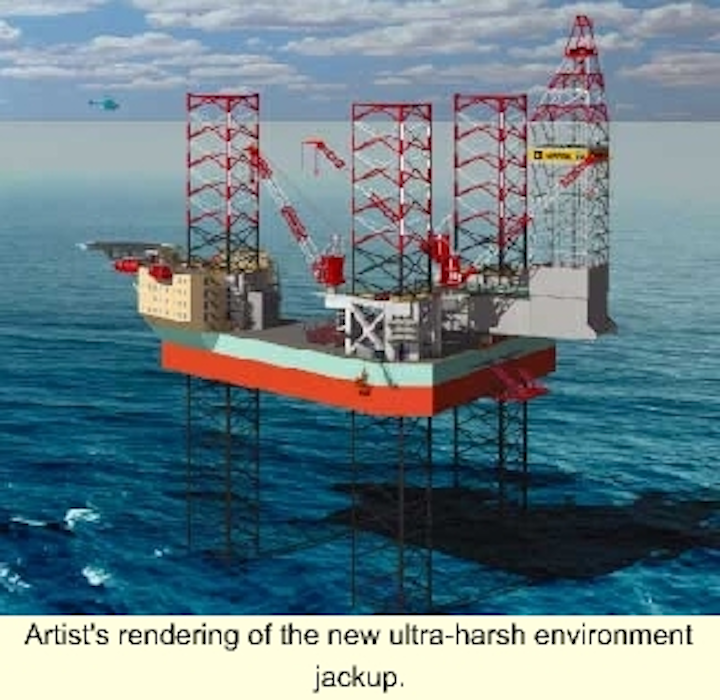 Mærsk Contractors has placed an order for construction of the second of two ultra-harsh-environment jackups that the developers say will be the world's largest and most advanced rigs of their kind. Upon completion in 2002, Hyundai Heavy Industries, Korea, will deliver the rigs to the North Sea or Canada (one in Q2 and the other in Q4). These new rigs will be able to operate in the most demanding environments at water depths up to 492 ft, more than 98 ft deeper than today's largest jackups, claim Mærsk officials.

Mærsk Contractors, in cooperation with Marine Structure Consultants, developed the design for the new jackups over a two-year period, during which they evaluated and incorporated hundreds of suggestions from Mærsk Contractors' rig crews and from a large number of oil companies. The gathered data yielded the following criteria for the new design:

Mærsk's new jackup design allows it to drill subsea wells in addition to traditional surface completed wells. The new jackup will be equipped with a combined blowout preventer (BOP) system that will allow the rig to work with the BOP in surface mode or with the BOP on the seabed in subsea mode. The cantilever envelope has been increased to twice that of traditional jackups, and the variable deck load has been increased to more than double that of comparable rigs.

The new jackups will be able to compete with semisubmersibles in water depths up to 492 ft in harsh environment areas and 625 ft in less demanding areas in part because the jackup has the advantage of being less dependent on weather conditions. Furthermore, the large cantilever load makes it possible to install templates.

The new jackup can also replace platform rigs because the drilling envelope has been increased to twice that of traditional units. The cantilever maximum distance from the stern to the well center is 90 ft, and the maximum distance from the centerline to each side is 32.5 ft. This, combined with the 673 ft (plus optional 132 ft) leg length, will allow the new jackup to reach most wells on platform installations.

At 26,919 sq ft, the available deck space on the new jackups is more than double that of a traditional harsh-environment rig, the developers say. All mud treatment is built into the cantilever, and the cantilever bottom is raised 11.4 ft from the deck. The anchor winches and crane foundations are mounted on the jacking structure.

The large, flat, open deck has a capacity of four tons per sq meter, which minimizes crane activity by allowing equipment to be moved on the rig using a forklift. The cantilever is twice the traditional length, making it possible to place all arriving tubulars directly on the cantilever deck.

The introduction of the X-Y cantilever dramatically increases reach and load capacity. As the term X-Y implies, the cantilever is able to skid transversely as well as longitudinally as one fixed unit, thus avoiding the need for a transverse skidding substructure for the drill floor. This new design ensures that the combined load does not restrict the cantilever. The rig's layout allows for simultaneous operations, such as rotary drilling and coiled tubing drilling.

The 30 oil companies that contributed design input expressed the need to work in deeper waters than present-day jackups can manage. The high-capacity leg fixation system and skirted spud cans permit operations with a variable load up to 10,000 metric tons at water depths up to 492 ft in harsh-environment areas such as the North Sea or Canada. In less demanding areas, this design can work year round in water depths up to 625 ft. Moving the border line for jackups in respect to water depth combined with the subsea capability enables the new jackups to cover more than 86% of the existing subsea installations in the UK sector and 43% in the Norwegian sector.

A number of design elements refine safety features and improve the work environment. Adopting and combining features already proven on Mærsk Contractors' existing harsh-environment jackups, mechanical handling/automation has been built into the design wherever possible. All rotating machinery will be supported by suspension systems for noise reduction. Air inlets and outlets placed in three areas along the jacking structures will create the optimum deck layout and will lower the noise level.

The new jackups can accommodate up to 120 people, which gives spare "hotel" capacity for other operations that are not necessarily conducted on the rig. Accommodations are located around the forward leg in a V-shaped block split into a crew accommodation block on one side and a service block on the other.

Based on International Association of Drilling Contractors' (IADC) daily drilling reports for the Mærsk Guardian and the Mærsk Gallant, individual operations have been isolated to identify and evaluate areas for optimization in the new units' design, resulting in new features such as:

It is expected that this new design will be at least 25% more effective than existing harsh-environment jackup rigs.