While the oil and gas industry is not expected to fully automate its drilling facilities, it has been moving toward production automation, especially for offshore topsides and subsea applications. 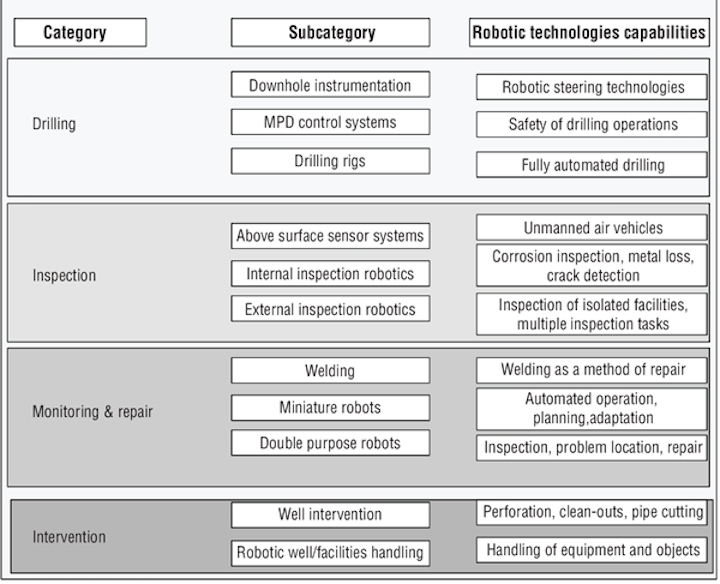 While the oil and gas industry is not expected to fully automate its drilling facilities, it has been moving toward production automation, especially for offshore topsides and subsea applications. Several challenges, such as high costs and strict HSE requirements can be addressed through automation.

However, the industry will most likely follow the same route as the aviation industry where a plane operates on autopilot, but is supervised by pilots that have override authority. The reason behind not opting for full automation is not the lack of technology. Rather, it is because challenges persist around the lack of standardized equipment, poor software interoperability, lack of alignment with government regulations, and the negative public perception of fully-autonomous robots. The technological advances made also reinforce the need for human override in certain scenarios.

But, there is still another challenge. While the oil and gas industry is developing drilling automation technologies, there is little cooperation between companies. This is because automation is seen as an ultimate game-changer, and therefore an area of competitive differentiation.

There is a similar situation with downhole equipment, such as rotary steerable systems (RSS) and managed pressure drilling (MPD) systems; it will only work with equipment provided by the same service company. The lack of interoperability between systems is due to the lack of industry standards for automated equipment, as well as the significant difficulty in adjusting the control systems of current hydraulic equipment.

Drilling company officials indicate that standardization and interoperability is a key challenge for the successful implementation of automation technologies in the oil and gas industry. Thus, the key factor slowing down automation is not the lack of technology, but the lack of interoperability, as it makes the equipment very expensive, difficult to maintain, and nearly impossible to replace.

A large number of companies are involved in the research and development of robotic systems for the oil and gas industry, and offer automated technologies across the production sector: drilling, inspection, monitoring, and repair and intervention.

A large number of R&D groups are focused on the development of internal and external inspection technologies for offshore topsides applications. The technology currently available on the market varies significantly, but a few things in common are:

The remaining three categories: drilling, monitoring, and repair and intervention, are a lot less popular amongst small-medium size companies since they require major testing and development. Therefore, only a limited number of companies can afford the investment.

Monitoring and repair robots, or double-purpose robots that are capable of inspecting and repair, are in their infancy. There are a limited number of companies looking into this technology. At the moment, it is more distant future rather than feasible reality.

Semi-automated intervention technologies are available on the market, but they are supplied only by the major service companies. In large part, this is due to the significant testing and expensive development required to certify the equipment.

Automated and semi-automated drilling systems – including MPD systems, RSS, and robots for drill floor automation – are also offered only by major service companies. Each offer a slightly differentiated service, and almost all state that their systems can be interconnected with other systems running on the field such as MWD/LWD (measurement/logging-while-drilling). However, based on previous experience and the operators’ claims, in order for RSS or MPD to communicate with LDW/MWD, both services are needed by the same company. Thus, the challenge of interoperability remains.

In addition to limited interoperability, most of the technologies for robotic drilling are hydraulically powered. Hydraulics have a number of associated issues, such as problematic control systems, poor robot awareness, space requirements (which poses a significant challenge for offshore applications), and challenges with hydraulics reacting to pressures that cause physical problems.

Robotic Drilling Systems AS (RDS), a Norwegian provider of robotic drill floor system, offers automated, fully electric (as opposed to hydraulic) elements for the drill floor. If these elements were combined, then theoretically humans could be removed from the drill floor. RDS was originally established as a “subsea drilling rig” – it was focused on the development of the subsea robotic drilling rig to address challenges posed by operations in offshore Arctic conditions. However, with decreasing activity in the Arctic (regulations and diversification of supply from other regions) and the decreasing oil price, the company changed its name to RDS to address a wider market of robotic technologies for offshore topsides facilities.

Those elements include the pipehandler, iron roughneck, and the industry’s first drill floor robot. RDS has also developed a dynamic control system that allows communication between all robots operating on the drill floor. The control system is adjustable for control software that might be present on the rig (MDP systems, RSS systems, etc.). Importantly, these technologies can be retrofitted to any drill rig to provide interoperability, potentially delivering full drill floor automation.

The drill floor robot is a high-performance technology that uses seven-axis articulation and can operate stationary, or on rails. It allows both automatic and hands-free operation as it performs a variety of functions on the drill floor depending on what tools it is given, such as grippers, spinners, or clamping tools. The drill floor robot easily switches between using different tools while being fast and precise. Its inductive interface makes it possible to transfer power while communicating, thereby creating smart tools to measure or film for inspection purposes.

The drill floor robot was prototyped in 2010 and tested in 2013, and is now on a semi-commercial pilot stage on a land rig in Norway.

Findings from the field

Following the field trials of the drill floor robot in 2010, RDS suggested that in practice there are two recurring findings. First, enduring hydraulic systems are not easily amenable to external control software; and second, human operation is required.

The control system initially posed a number of challenges during the trial as the robots were partially hydraulically operated. This caused leaks at high pressures and significant inaccuracy in the robot’s performance. In addition, the control software for the hydraulic systems is considerably less open to interoperability when compared to electric systems. This became a major challenge, and company officials have indicated that the final control system took a number of years to develop. It was concluded that electrical motors and drivers are open to interoperability with other systems, allow more flexibility, and are more precise and easier to use. The dynamic control system, the final product, is now compatible with a wide range of software systems and can be retrofitted.

During the field trial, RDS also concluded that a human operator is critical to the successful performance of any operation involving robots. The human operator was involved throughout the trial, and it was demonstrated that robots need human operation for commands and decision making. Robots need an initial task to develop an execution plan and for implementation. However, if the robot is faced with an unexpected challenge, it would send a signal to the operator to ask for intervention. Thus, the human operator is a critical component of any process involving robots.

Similarly, the field trial proved that the operator can always intervene in case of an emergency. One of the critical aspects being explored by the developers of robotic technologies is safety. Having a human operator control the robotic system can help calm fears about loss of control. •