Managed pressure drilling, the technique that maintains bottomhole pressure in wellbores where conventional drilling methods present costly and risky limitations, is no stranger to the oil and gas fields of Indonesia's Makassar Strait. 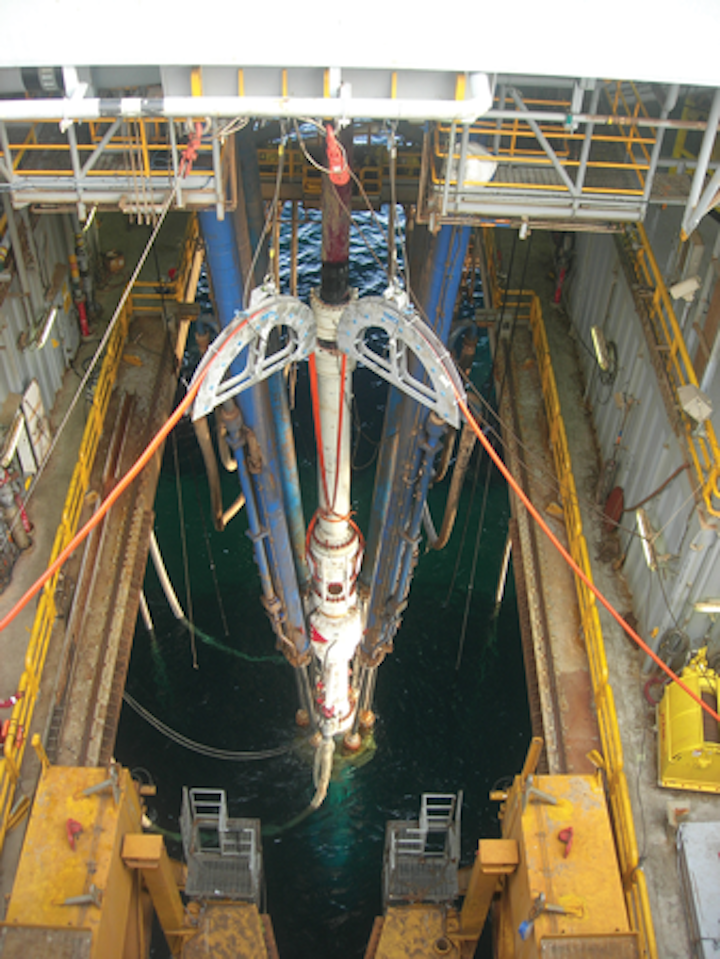 Managed pressure drilling (MPD), the technique that maintains bottomhole pressure (BHP) in wellbores where conventional drilling methods present costly and risky limitations, is no stranger to the oil and gas fields of Indonesia’s Makassar Strait. Situated between the islands of Kalimantan and Sulawesi, the area’s deepwater carbonate formations have been drilled with MPD methods, typically using a light mud, to drill through severe circulation losses and reach target depth (TD).

In a unique application of the approach, an international operator deployed a multi-purpose MPD system for a deepwater exploratory well on the non-carbonate side of the strait to address early kick detection issues, and navigate narrow pressure windows en route to the zones of interest. Although total losses were not anticipated in drilling through the clastic formation, the operator wanted to configure an MPD system that could seamlessly transition from one MPD mode to the other, if necessary, and drill more efficiently while ensuring optimum well monitoring and control. The project was designed to meet the three-fold objective of MPD: drillability, efficiency, and safety. The operation was completed safely, reached the target with no environmental incidents, saved time, and reduced the anticipated cost by several million dollars.

The approximately 20,000-ft (6,000-m) well is near the Kalimantan side of the Makassar Strait in approximately 7,500 ft (2,300 m) of water, which at the time of drilling was the deepest water in which the Weatherford automated MPD control system had been used. The system was engineered and installed on a moored semisubmersible rig to meet the requirements of the geologically diverse formations throughout Indonesia. The operator’s objectives were to drill through the narrow mud-weight window while safely diverting gas to reach TD. The plan called for using a mud weight less than the pore-pressure gradient while drilling and maintaining bottomhole pressure higher than the equivalent circulating density (ECD) during connections to increase operational efficiency.

The MPD implementation created a safe closed-loop drilling system that detected gas influxes before they migrated and dissolved into the drilling fluid. Equipment to accommodate the multi-mode functionality of the MPD system included:

• An MPD choke manifold with an integrated dual choke system, mass flow meter, hydraulic power unit and systems intelligent control unit (ICU), which monitored and controlled the operation. The function of the integrated ICU is to prevent any problems with data acquisition and communication.

For this configuration, a surface buffer manifold was installed to augment automatic flow diversion and facilitate multiple flow routing options, including advanced kick detection and managing bottomhole pressure during connections. The buffer manifold is versatile in its ability to route and reroute return flow. For detecting losses or kicks, the device can route the flow to the MPD manifold. To maintain minimum pressure on the well, it immediately reroutes flow to the mud trough.

The automated MPD system is designed to detect and automatically manage and minimize the size of gas or fluid influxes to prevent potentially dangerous kicks. It maintains constant BHP (CBHP) so that the pressure exerted during the drilling process remains between the pore pressure and fracture pressure gradients. In this case, the system was configured to complement the conventional well control equipment on the rig, leaving the existing flowlines intact. The layout enabled switching operations between the sophisticated MPD capabilities and conventional drilling at any time.

The surface hole section of the well was drilled conventionally. Drilling switched to MPD in the subsequent hole section, and the MPD system was used to drill all the way to TD using a synthetic-based mud that was less than the pore-pressure gradient.

The RCD, a key component of the MPD system, was installed in the mud-return system to contain annular fluids while drilling and to seal the well. A bearing assembly installed into the RCD body facilitated transformation of the open fluid-return system on the rig to a closed-loop circulating system, effectively isolating the rig floor from any wellbore fluids and diverting the fluids back to the mud shakers. The RCD and MPD manifold manage riser gas by immediately detecting it, exerting pressure and processing the gas in a controlled manner—a capability not available with conventional diverter systems.

The return flow from the well was safely routed through the automated choke manifold to a real-time Coriolis mass flow meter. The meter captured critical data, including mass and volume flow, mud weight and temperature, by analyzing the annular fluid returns in real time. The data provided by the mass flow meter is essential for quick reaction to well control events and distinguishing between ballooning and more serious events, such as kicks.

The system’s well monitoring capability and well model calculations were used to apply surface back pressure (SBP) during drilling by adjusting the choke opening to keep BHP higher than the ECD. This was accomplished by controlling the annulus pressure profile through the wellbore, especially when the main pumps were off during connections. The rig booster pump continuously pumped fluid into the riser and to the choke manifold, keeping flow within the optimum detection settings of the flow meter and enabling better pressure management. While the drillstring mud pumps were turned off to make drillstring connections, SBP from the choke manifold compensated for the loss of ECD, enabling accurate control of the desired BHP.

The automated MPD control system was instrumental in enabling early kick and loss detection and responding to small influxes before they became problematic. While drilling to TD, the system detected a 1.5-bbl influx. Flow rate was subsequently reduced to confirm the influx, and SBP was quickly applied before closing the annular blowout preventer (BOP). The system allowed for continuously applying SBP while the riser was circulated to ensure it was free of gas. After the Coriolis mass flow meter confirmed that there was no gas influx, pressure was equalized on the riser before opening the annulus.

Just as important was the ability of the system to distinguish between false kicks and wellbore ballooning. In clastic formations with a narrow mud-weight window, wellbore ballooning is common if the mud weight is already high because of the pressures exerted on the formation. The pressure relief that occurs while making drillstring connections can sometimes cause a false kick, which can cause problems.

Responding to a false kick by increasing the mud weight aggravates wellbore ballooning and may lead to severe fluid loss issues. Activating well control emergency measures, such as closing subsea BOPs, is expensive and ill-advised because the full capability of the BOP must be reserved for processing real kicks and handling well emergencies. By distinguishing real kicks from ballooning, the MPD system helped the operator avoid this costly pitfall. When ballooning did occur during drilling, the MPD seal mimicked closure of a subsea BOP.

The MPD operation was completed five days ahead of plan. Total well cost was $18 million below the authorized amount. The operator was able to navigate the narrow mud-weight windows, maintain control of gas influxes and reach desired depth according to the planned casing program, an outcome that would not have been feasible using conventional drilling methods. •