With thousands of feet of seawater between surface and wellbore, harsh and unpredictable environments, and difficult-to-access equipment placed far below the seabed, offshore reservoirs magnify the typical challenges associated with well completions.

With thousands of feet of seawater between surface and wellbore, harsh and unpredictable environments, and difficult-to-access equipment placed far below the seabed, offshore reservoirs magnify the typical challenges associated with well completions. Extreme environments demand lower-completion technologies that mitigate risks, lower costs, and save rig time. Lower-completion interventions that require tripping thousands of feet in and out of wells mid-operation can incur at least $1 million per intervention and significant delays. These complex operating conditions combined with the current economic climate leave no margin for error.

In extended-reach applications, conventional proppant stimulation allows little to no flexibility in the event of unplanned scenarios, such as premature screen-outs or poor injection into zones. In these circumstances, additional milling runs are required to continue operations, and conversion to a less efficient completion technique may be necessary. This significantly increases nonproductive time between fracture cycles and the associated costs. To address these concerns, operators have long sought lower-completion technology that reduces intervention during stimulation, avoids time-consuming mill-outs, minimizes exposure to abnormally stressed formations, and provides contingencies for unanticipated events.

Weatherford recently introduced the AutoFrac system as an effective option for stimulating the open-hole section to the completion toe in extended-reach wells. The system operates lower-completion tools remotely to minimize intervention and milling requirements and costs, and it reduces time between fracture cycles. The system can be fully customized for specific well conditions. 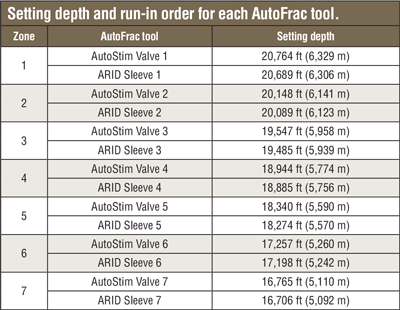 The new system provides several options for tool communication without reliance on control lines or mechanical actuation: radio frequency identification device (RFID) technology, frequency-modulated pressure pulses, ACTiFRAC pressure pulses, timers, or a combination of these options. RFID actuation involves dropping preprogrammed electronic tags downhole. As the tags pass by the tools, they transmit commands to built-in tool antennae, and the tools respond by opening or closing. When it is not possible to drop RFID tags downhole, a sequence of pressure cycles can actuate tools. ACTiFRAC pulses adopt algorithms within the tool software that enable the recognition of pressure pulses in circulation mode, which enhances flexibility. For operational updates, the Weatherford downhole i-Rabbit system (DRS) is a memory logging tool that retrieves temperature and pressure data and that provides valuable information regarding the status of tools in situ.

The new system incorporates one or more of the following tools: the advanced reservoir isolation device (ARID) stimulation sleeve, the AutoStim flapper valve, and the reservoir isolation valve (RIV). The ARID sleeve isolates the tubing from the open hole and provides on-demand reservoir access. Upon remote actuation, the sleeve autonomously shifts its ports into the open position for proppant fracturing.

Depending on specific well needs, operators can use either AutoStim flapper valves or reservoir isolation valves to isolate previously fractured zones and to divert stimulation fluids through open ARID sleeves in the next interval. The valves close and open, on command, when actuated. The flapper valve, which enables unidirectional flow of stimulation fluids, holds pressures from above up to 10,700 psi (73.8 MPa). The RIV uses the same design as the flapper valve, but also includes a mechanical locking mechanism that enables the RIV to hold differential pressures from both above and below. With this added functionality, the RIV is typically used at the toe of the well and provides an ISO 28781 V1 (Gas)-rated well barrier.

Recently, Weatherford deployed the AutoFrac system in a tight-gas well in the North Sea. The client sought to develop the Leman Sandstone reservoir-while minimizing intervention runs and costs-by performing six stimulations in seven horizontal zones. Other systems that the operator had used previously lacked contingencies for screen-outs. Because relatively little hydraulic fracturing is performed in this type of reservoir and the formation could contain high-permeability streaks, much uncertainty existed about reservoir response to stimulation treatments. This greatly increased the risk of a screen-out.

Once the lower-completion string was run to depth, the team added RFID tags into the fluid stream and circulated them downhole through the liner-hanger running tool. The RFID tags commanded the flapper valve at the completion toe to close, which provided a deep-set barrier. Pressure testing indicated positive valve integrity. 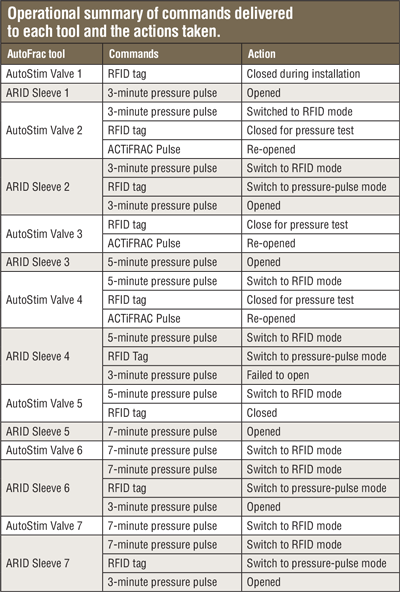 Hydraulic stimulation of the zones occurred in June 2015. The stimulation operation used a combination of RFID tags, pressure pulses, and ACTiFRAC pulses to actuate the AutoFrac system.

Six of the seven ARID sleeves opened successfully with a command-response rate of 93%. An isolated electronic failure in ARID Sleeve 4 necessitated a shifting-tool run to mechanically open the sleeve, which resulted in the sleeve opening and achieving a good injection rate during stimulation. All AutoStim valves successfully closed and re-opened with a 100% command-response rate.

The new fracturing system also demonstrated a high level of flexibility during stimulation. Injection was not possible in one zone; however, the system presented several viable options for continuing the operation cost-effectively, minimizing intervention runs, maintaining remote operation of tools, completing all planned stimulations, and maximizing production.

Additionally, the system functioned correctly in a screen-out that occurred during the flush stage of Zone 1, with proppant up to an estimated depth of 9,843 ft (3,000 m). An indication from the bottomhole gauge and collected data from subsequent pressure testing revealed that AutoStim Valve 2, though filled with 9 ppg of proppant, had closed per instructions from an RFID tag. This provided a closed system for a hydrocarbon-free clean-out run. Following the completion of the stimulation program, it was confirmed that all AutoStim valves had re-opened as intended.