Against a backdrop of low oil prices and spending cutbacks in the upstream E&P industry, the Middle East is the only major region in the world yet to register sizeable decreases in the number of offshore drilling rigs (jackups, semisubmersibles, and drillships) holding current or future contracts. 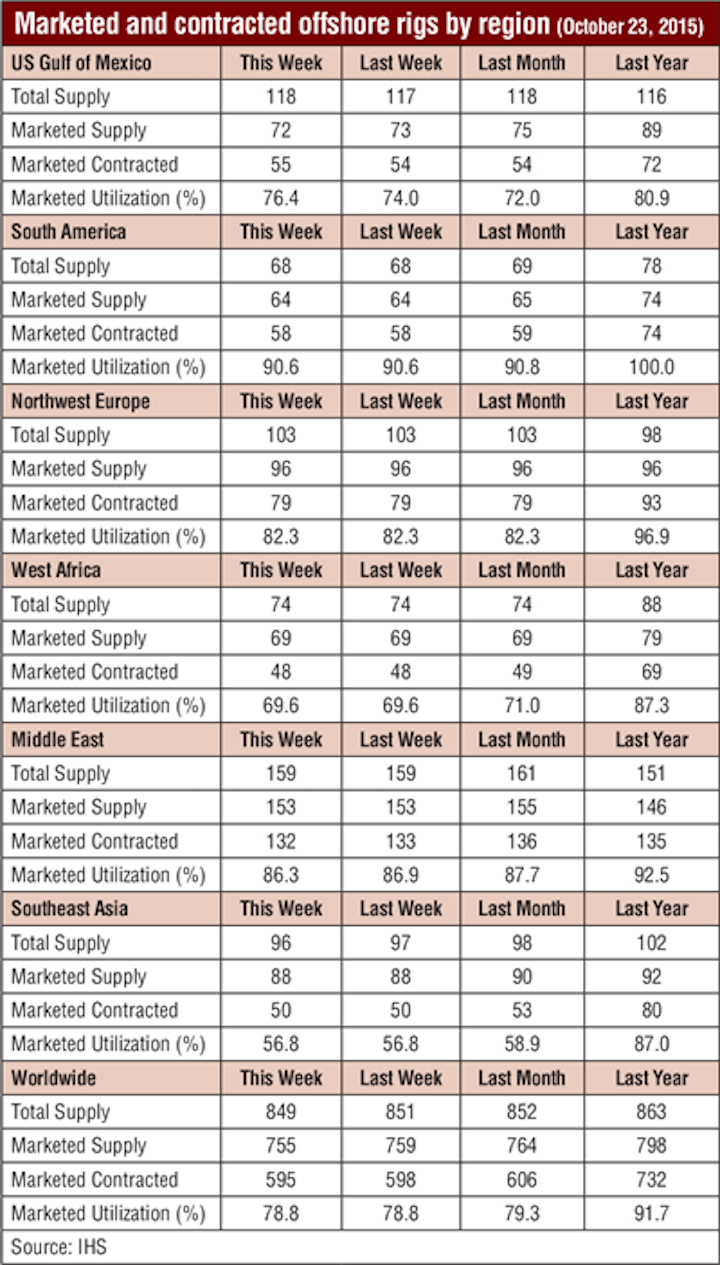 Against a backdrop of low oil prices and spending cutbacks in the upstream E&P industry, the Middle East is the only major region in the world yet to register sizeable decreases in the number of offshore drilling rigs (jackups, semisubmersibles, and drillships) holding current or future contracts.

The number of contracted rigs - typically jackups in this part of the world - stood at over 130 as of late October, only slightly lower compared to a year ago. In comparison, the contracted fleet in other key regions such as Southeast Asia, West Africa, and the US Gulf of Mexico shrank significantly, between 20% and 40%. The global average was a net 20% decrease, with the number of contracted units dropping from around 730 to less than 600 between October 2014 and October 2015.

Why has the Middle East’s contracted rig count managed to hold steady when contracted numbers have wavered elsewhere? In this region of high levels of state participation in the oil and gas industry, countries such as Saudi Arabia, Iran and the United Arab Emirates (UAE) are largely maintaining - or even increasing - their working rig populations to ensure that projects or goals of national interest are met. These plans are facilitated by lower development costs compared to those in areas such as offshore northwest Europe and West Africa.

Saudi Aramco - with over 45 jackups under contract - is the top employer of offshore drilling rigs in the Middle East and the second worldwide, after Petrobras. When oil prices plummeted during the 2008/2009 global financial crisis, the national oil company (NOC) chose to scale down its operated rig fleet. However, in the subsequent years, Saudi Aramco ramped up offshore activity again and effectively doubled its rig count between 2011 and 2014. 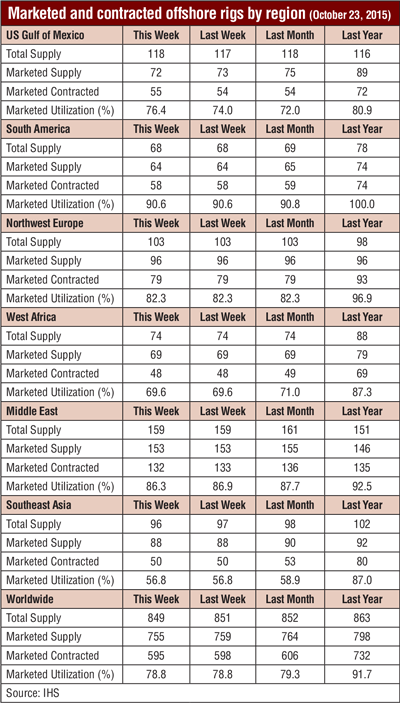 Despite the current environment of low oil prices (with OPEC deciding to maintain production levels) and pressure to reduce spending, it is understood that Saudi Aramco is not planning to significantly downsize its fleet of jackups, as it did in 2008/2009. Rather, in this buyer’s market, the influential NOC is using its bargaining power to negotiate day rate discounts in old and new contracts, not only for drilling rigs but for other services also. Saudi Aramco renegotiated a good number of jackup contracts earlier this year and renewed most that were expiring.

Iran, the second biggest jackup market in the Middle East, has managed to secure drilling rigs over the years in the face of sanctions that have prevented many foreign operators, service providers, and other companies from engaging in business with the country. It is estimated that more than 25 jackups are currently operating in the Iranian sector of the Persian Gulf, compared to 10 or so a decade ago.

In spite of sanctions, Iran has been able to buy and/or lease jackups from abroad; many of these rigs have been deployed to work on the giant South Pars gas development, from which production is being brought onstream in phases. The republic’s economic activity and government revenues are heavily dependent on petroleum revenues, yet weaker crude prices seem to have hardly made a dent in Iran’s offshore rig count. It is thought that many of the rigs deployed off Iran are operating under relatively long contracts for critical development projects that will carry on nonetheless. In the coming years, Iranian demand for offshore drilling rigs has the potential to grow by some significant degree with the anticipated lifting of sanctions. The country has already begun discussions with external parties regarding future development projects.

Meanwhile, the UAE is arguably the top growth area in the Middle East this year. The National Drilling Co. (NDC) of the Emirate of Abu Dhabi has said that its (land and offshore) rig count is not likely to be dampened by low oil prices as the UAE strives to meet its production target of 3.5 MMb/d by 2017/2018 and be able to sustain these levels. Abu Dhabi is to invest in some $2.5 billion in offshore drilling activities as part of the investment plans and the Abu Dhabi National Oil Co. (ADNOC) plans to drill around 160 wells per year in the next couple of years.

Earlier this year, NDC chartered eight additional jackups on behalf of operators in Abu Dhabi. Two of the rigs were already based in the region while the remaining six were mobilized from abroad. Most of these new contracts commenced during the second half of the year. Compared to other parts of the world, especially given the current circumstances, the hiring of eight incremental offshore rigs in one sweep by a single country is impressive, particularly considering the backlog of work that these units have been hired for: over 20 years firm plus potentially more than 10 years in the form of options.

Moreover, Abu Dhabi’s jackup fleet is set to expand further. The emirate has three LeTourneau Super 116E Class units under construction at the Lamprell yard in the Emirate of Sharjah. These are scheduled to be delivered in 2016/2017.

Elsewhere in the Middle East, working rig numbers have come down. In Qatar, the rig count rose from 2013 to 2014, but the market is experiencing some softness during the second half of 2015 as rigs become idle. In the offshore Neutral Zone, a joint development area between Saudi Arabia and Kuwait, production has been shut down as a result of disagreements between the parties involved and the jackup count there has dropped from four to two units. As for Oman, no rigs have been deployed offshore since early 2014 following a brief spurt of exploration/workover activity.

On aggregate, working jackup levels in the Middle East this year are expected to remain relatively flat compared to last year as growth in the UAE is anticipated to balance out declines elsewhere. Jackup day rates, though, have come down significantly as competition intensifies in an oversupplied market.

For the time being, the Middle East’s top jackup operators - namely the NOCs - are anticipated to have enough work in the pipeline to maintain existing working levels for the next year or two. In the most optimistic scenario, rig demand in the region may even increase, if various planned exploratory drilling programs by some of the region’s smaller/newer players go ahead.