Development in drill bit design is progressing on many fronts. Improvements range from reducing cutter wear to design enhancements. Some aim to improve longevity; others seek to improve penetration rates. 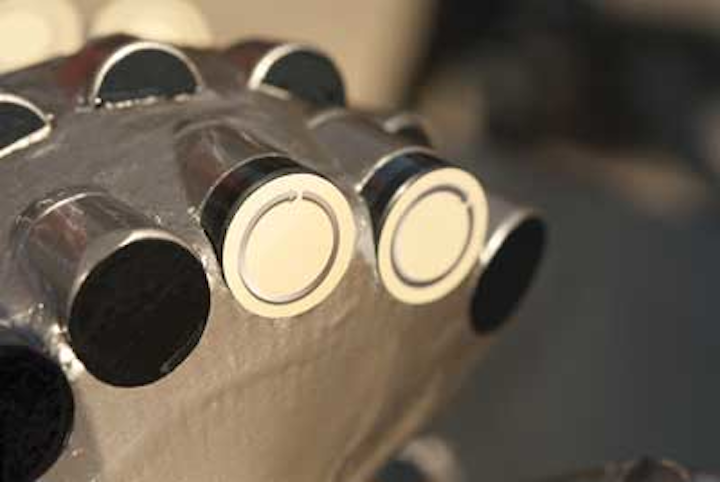 Development in drill bit design is progressing on many fronts. Improvements range from reducing cutter wear to design enhancements. Some aim to improve longevity; others seek to improve penetration rates.

Asked to address cutter wear, the principle cause of time-consuming trips to change out dull bits, Smith Bits engineers came up with one of the most innovative solutions in the history of polycrystalline diamond compact (PDC) bits—the ONYX 360 rolling PDC cutter.

The new cutter represents a major advance in bit design. As the name suggests, the ONYX 360 cutters are free to rotate 360° duringdrilling. This continually presents a fresh cutting surface to the rock face, extending every performance parameter by an average of 50%. Because the entire circumference of the cutter's diamond edge is used, wear is reduced to allow longer bit runs, greater sustained ROP and fewer bit replacement trips, saving considerable rig time. ONYX 360 cutters can be designed into any Smith Bits PDC bit. The number required and exact location of their placement is indicated by the unique IDEAS integrated drill bit design platform, allowing bits to be customized to yield the best results for specific applications. A robust housing containing the rotating cutter is brazed onto the bit blade at the specified location. In operation, the rolling cutter's orientation in the bit blade relative to its contact with the formation and coupled with the bit's drilling force, drives efficient rotation of the cutter.

In a recent well drilled offshoreAustralia, an 8.5-in. PDC bit configured with 16 rolling cutters drilled an abrasive sandstone interval to TD, thus reducing the number of bit related trips compared to the offset well and delivering $1 million in well costs savings to the operator.

A winning combination for North Dakota's Williston Basin is the MegaForce matrix body bit fitted with SelectCutter cutters. In the Bakken Play the geocolumn is a layer-cake type with alternating hard and soft strata. This presents one of the toughest drilling conditions known. The bit grinds slowly through the hard streak, then whirls through the soft streak, picking up momentum and torque. Suddenly, it hits another hard streak. This transition can actually break a blade off a PDC bit. At the least it can overstress the cutters.

The tough new MegaForce bit has an enhanced blade design to overcome transition forces. In both 8½-in. vertical hole intervals and long 6.0-in. lateral sections, new field performance marks were established throughout the basin. Record runs were recorded at lower cost per foot, as well as footage drilled and ROP that showed no bit-related drilling limits in the Williston.

The new cutter material and design of cutter placement and depth-of-cut from cutter to cutter ensures optimal performance during transition drilling. Already proven in the Permian basin, Rocky Mountain and Granite Wash formations, the decision to introduce the new cutter to the Bakken was an easy one. In addition to its tough impact resistance, the new cutter has extreme temperature-cycling capability. Performance shows it removes more rock with substantially less wear, and exhibits 40% greater abrasion resistance while drilling up to four times the footage of previous products.

Designed using the Design at the Customer Interface (DatCI) process, bits are designed to meet the specific requirements of each play. In the case of the MegaForce bit, the design includes a strategic configuration of "micro" nozzles which direct cuttings flow toward ample junk slots with little recirculation. In directional applications, the bit has been designed with a shorter shank length and 14% reduction of bit-to-bend distance to improve directional control.

Diamond impregnated drill bits address the world's tough drilling challenges. At Varel, the IMax series impregnated drill bits take diamond technology to a new level with strict diamond selection featuring diamonds of similar size and quality, improved diamond-matrix bonding, and a new pelletization process that ensures uniform diamond distribution. The cutting structure is computer-designed using the company's exclusive SPOT program. This program allows customization of design to address specific formations or specific basin characteristics. Parameters like matrix hardness, diamond size, and concentration can all be varied to match the application. Manufacturing techniques include controlled temperature infiltration to minimize oxidation and graphitization, a process that delivers improved wear characteristics. The IMax matrix is designed to wear away uniformly to continuously expose new diamond to the rock face. PDC cutters are added to the center of the bit to prevent coring and to the gauge area to prevent under gauge drilling.

Imax products are intended to run at high rpm which serves the recent addition of mud-driven turbines or motors to boost bit rotation speed without having to rotate the entire drillstring at high rpm. This gives drilling action similar to a dentist's high-speed drill without destructive vibration. The bits feature cutting elements made from hot isostatic pressed (HIP) segments strategically set into to the diamond impregnated bit blades.

Recently, in Oman's Shuram formation, Varel bits' added wear resistance was used to reduce costly pipe trips to replace worn out bits. Hard, abrasive strata had limited conventional bit runs to 216 ft (66 m) or less, with some runs as low as 62 ft (19 m). The IMax bits drilled runs as long as 817 ft (249 m) and at a higher rate than any previous bit used.

Specialized bits from NOV evidence the wide variety of designs offered by the company to address specific drilling challenges. Featured designs include the dual stage SpeedDrill, the DuraDiamond Evolution, and the ReedHycalog Helios and Inferno PDC cutters.

NOV has developed its Cutter Index, whereby the ideal Cutter variant may be selected for any particular set of conditions. The cutter Index rates cutter technology according to its resistance to the three primary failure mechanisms for most applications: thermal degradation, abrasion, and impact. The result allows designers to emphasize the bit characteristics that address the dominant mechanism. For example, the Inferno range of cutters targets thermal degradation.

The tough UK drilling area west of Shetlands sits on the Atlantic fringe and is well known for its challenges. Chief among these is exceedingly foul weather, which causes operators to try everything they can to take maximum advantage of narrow drilling windows. Careful examination of a proposed well led to NOV's recommendation of its SpeedDrill dual diameter PDC bit that combines a smaller pilot bit with a concentric reamer bit in the same body. The principle of this bit is that the pilot bit drills fast and in so doing, relieves the stress in the surrounding rock. This allows the reamer bit to break the rock at the same rate. The process requires far less energy, resulting in markedly more efficient drilling, longer bit runs, and improved borehole quality.

After stress-relieving the surrounding rock with the pilot bit, the reamer section then engages, enlarging the hole to the required diameter through this previously stress relieved rock. Furthermore, and in contrast to a conventional single-diameter PDC bit which typically provides 50% gauge pad contact with the wellbore, SpeedDrill bits offer 100% contact by utilizing the separate pilot and reamer sections that are oriented to provide continuous wellbore contact through the gauge pads. This increased gauge contact provides a significant improvement in lateral stability and helps prevent the initiation of bit induced vibration. This results in improved bit condition, leading to longer interval lengths and faster ROP. The increased efficiency and improved stability provided by a SpeedDrill bit can also contribute to reduced vibration related tool failures, improved borehole condition, and cost savings.

Diamond impregnated drill bits have been used in the oil industry for years. They were initially developed to drill hard, abrasive, homogeneous lithologies in vertical wells where roller cone bits were previously used. As the need to increase bit durability for longer runs grew, diamond impregnated bits were developed.

This bit technology is based on the principle of using the complete blade as the cutting structure. Using the diamond grit mix to grind away the rock required a high number of revolutions per minute (RPM) to compensate for the low depth of cut of its cutting elements, and so these bits were paired with high-speed turbines or motors to achieve a competitive rate of penetration (ROP) while maintaining the benefit of extended intervals drilled.

DuraDiamond Evolution impregnated drill bits have been updated with manufacturing advancements, materials, and design engineering improvements. These bits are now able to expand the conventional application range, not only drilling homogenous and hard abrasive formations, but also hard-to-drill formations including inter-bedded lithologies with abrasive stringers that may include harder sandstones, shales, conglomerates, metamorphic/igneous rocks, and other harsh, difficult-to-drill rock. This technology has proved reliable, and when carefully selected, it can still outperform PDC drilling technologies in durability and ROP.

Used in a tough area of western China, the bits drilled formations consisting of conglomeratic sand inter-bedded with shale and siltstone with unconfined rock strength up to 30,000 psi. The chief challenge was extreme bit wear and low ROP. By pairing the DuraDiamond Evolution bit with a high-speed mud turbine, the bit was used three times in the same swell to overcome zones that typically drilled at 3.28 ft/hr (1.0 m/hr). In a well targeted for 22,304 ft (6,800 m), multiple bit trips cost an incredible amount of money. Use of the new bit more than doubled the ROP, and saved several bit trips.