Redeploying an FPSO, while possible, is not as easy as it may appear. Unlike a drilling rig, floating production systems are bespoke assets designed for a specific regulatory regime and field requirements, including the weather conditions, water depth, oil and gas characteristics, as well as gas, water, and/or chemical injection for reservoir management. Depending on the differences between the fields, redeployment can require modifications ranging from relatively minor refurbishment to extensive modification or replacement of the topsides and mooring. 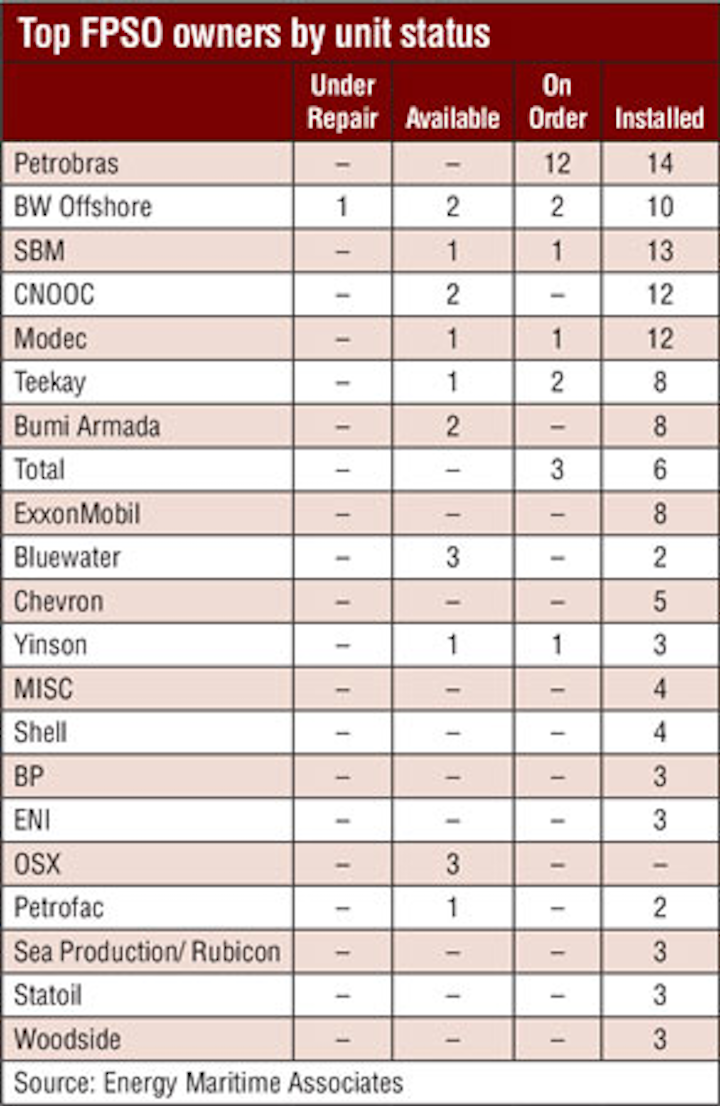 There are currently 51 idle floating production systems (FPS) in the global offshore market - 25 FPSOs, 10 production semis, eight FSOs, six MOPUs, one spar, and one FLNG are available. This is an increase of almost 100% from just one year ago, with 23 units coming available in 2016. However, some of these units have been idle since 2011.

FPSOs are the most prevalent type of FPS, with 166 installed and 26 on order. Therefore, the current FPSO utilization is 87%, and there are almost as many FPSOs laid-up as on order. Almost half of these idle FPSOs are owned by larger leasing contractors with three or more units. The top seven FPSO leasing contractors (BW Offshore, SBM, Modec, Teekay, Bumi Armada, Bluewater, and Yinson) all have at least one available unit.

Redeploying an FPSO, while possible, is not as easy as it may appear. Unlike a drilling rig, floating production systems are bespoke assets designed for a specific regulatory regime and field requirements, including the weather conditions, water depth, oil and gas characteristics, as well as gas, water, and/or chemical injection for reservoir management.

A good example of the difficulty in redeploying FPUs can be seen with the FPSOFalcon. This unit was the first of three “generic” West African FPSOs ordered by Exxon in 2002, followed by Serpentina in Equatorial Guinea and Xikomba in Angola. These units were designed to be suitable for a wide range of field properties, weather conditions, and water depths. The FPSO Falcon operated in Nigeria’s Yoho field for four years and then was laid-up. Despite this “generic” design and large processing capacity of 165,000 b/d of oil, 95 MMscf/d of gas, 90,000 b/d of water injection, and 2 MMbbl storage capacity, the FPSO Falcon never operated on another field and was eventually sold for demolition in 2016.

Depending on the differences between the fields, redeployment can require modifications ranging from relatively minor refurbishment to extensive modification or replacement of the topsides and mooring. As a result, only 36 FPSOs have been redeployed to at least one other field after completing their initial contract. Energy Maritime Associates has analyzed these FPSOs to see what made them more suitable for continued service in a new location.

Location. Most of these redeployed FPSOs did not have to travel too far between assignments. Two-thirds were relocated to another field in the same region (staying within the North Sea, Africa, Brazil, Southeast Asia, China, or Australia). The FPSOs that did change regions were mostly between Brazil and Africa, or from the North Sea to less severe locations in Brazil, Africa, and Asia.

Clients.While the units may not have traveled very far between contracts, 82% of redeployed FPSOs did change clients. Those that kept the same client were either chartered to Petrobras, or owned by the field operator.

Technical specification. Thirty-six percent of redeployed FPSOs were designed for the harsh environmental and regulatory conditions of the North Sea or Australia/New Zealand. Most of these were purpose-built units constructed to higher standards with design lives of 20 years or more. 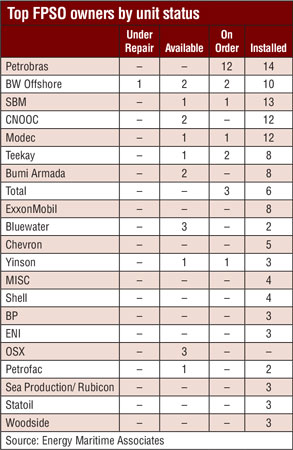 Redeployed FPSOs generally have smaller processing capacities - almost 70% of redeployed units can process less than 50,000 boe/d, compared to about one-third of the currently installed FPSO fleet. More striking is that a quarter of redeployed units process under 25,000 boe/d, as compared to less than 10% of the currently installed fleet. However, some large capacity units also have been redeployed, including four units with 100,000 boe/d capacity. In some cases, the FPSO’s full capacity is not utilized in the new location; while in others the field operator may amend their development plans to suit the FPSO’s capabilities.

Time between contracts.The length of time between one contract and redeployment to the next ranges from one to six years. The vast majority of redeployed units were off-hire for less than four years, including the time for modifications to suit the new field. Some 61% took less than two years between contracts, while another 25% took two to four years. Only 14% of redeployed units were idle for more than four years.

The main driver of the time between contracts was the time needed to find a new client, not the time spent in the shipyard. Most units required life extension work to the hull and some topsides modification, while a few units needed to be completely reconverted to suit the new field.

Past and present redeployments

The most successfully redeployed FPSO by far is thePetrojarl 1, which has operated on 10 fields in the North Sea since 1986, including 12 years on Statoil’s Glitne field. Extensive time and modification was not needed between these deployments as they were in the same region with similar field characteristics.

For its latest contract, thePetrojarl 1 is being relocated to the Atlanta field in Brazil, which has different characteristics including heavy oil. The modifications were expected to take fourteen months with a cost of $183 million. However, there have been delays and cost overruns due to a “larger scope of work relating to field specific requirements and the age of the unit, as well as slower than expected work progress,” according to Teekay. 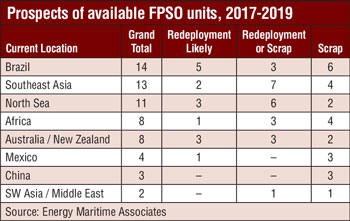 Cost and schedule overruns are not uncommon for all types of floating production units, and redeployment of idle FPSOs are no exception. It is critical to thoroughly understand the condition of the existing unit, the requirements for the new location, and the modifications needed to meet those requirements. A prime example is theEnquest ProducerFPSO, which had been on the UK’s Fife field for 14 years and then laid-up for almost five years before beginning upgrades for a new assignment on the Alma field in the UK. The modification works took twice as long as expected with significant cost overruns. According to Enquest, the effort “started out with a project that was refurbishment of a vessel...and ended up with a nearly new vessel.”

Similar to thePetrojarl 1 FPSO is the Petrojarl Varg FPSO, which was demobilized in mid-2016 after 18 years in operation offshore Norway. Teekay hopes to secure a multi-year contract for the Petrojarl Vargin the North Sea by 2020, with expected upgrade costs in the range of $100-400 million.

Another recently demobilized UK FPSO is theAoka Mizu, which produced for seven years on the Ettrick and Blackbird fields. After less than a year idle, the unit is in exclusive negotiations for the Lancaster field in the UK, which is targeting first oil by 1H 2019. Hurricane Energy and Bluewater signed a heads of terms to charter the FPSO for up to 10 years, subject to project sanction and final contractual agreements by November 2017.

In December 2016, BW Energy (a new joint venture between BW Offshore and BW Group) purchased majority stakes in the Dussafu Ruche field offshore Gabon. One of BW Offshore’s available FPSOs will be used on this field starting in 2018. The estimated field development costs are $150 million excluding the FPSO upgrade, which is not expected to be substantial. BW Energy will look to deploy BW Offshore’s idle assets on other offshore developments.

While most FPSO owners will continue to seek long-term contracts with strong counterparties for new projects, it is expected that some owners will take a more commercial approach for their idle assets. This would include arrangements exposing the FPSO owner to oil price and reservoir risks as well as rewards.

In addition to the 25 FPSOs currently available, another 38 are likely to come off contract in the next two to three years. Out of these 63 assets, at least 40% will certainly be scrapped, either immediately upon demobilization or after some period of lay-up. Based on EMA’s analysis of these units and the prospective project pipeline, it is believed that almost a quarter of these available FPSOs will find new employment. Another 23 of these units might have a chance for another contract, depending largely on the oil price and the appetite of the FPSO owner to accept field risk.