Eni has drilled the first well by an international major in Mexican waters since the country's 2013 Energy Reform process. 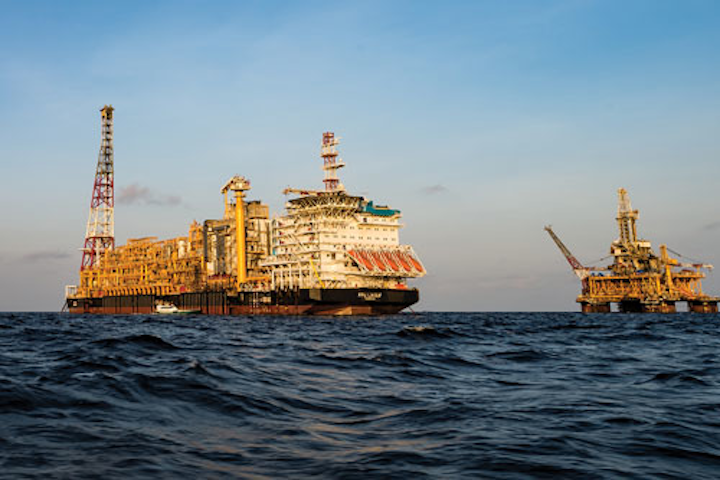 Eni has drilled the first well by an international major in Mexican waters since the country’s 2013 Energy Reform process. The well, designed to appraise the shallow-water Amoca discovery, intersected 110 m (361 ft) of net oil pay from Pliocene sandstones, some from a deeper, previously undrilled horizon. Eni plans to follow up with further delineation wells on Amoca and the Miztón and Tecoalli fields ahead of a phased, fasttrack development.

Chevron and partners PEMEX and INPEX have started exploration on deepwater block 3, awarded under last year’s bid round, after signing a contract with Mexico’s National Hydrocarbons Commission. BHP Billiton and PEMEX have done the same for blocks AE-0092 and AE-0093, containing the giant deepwater oil discovery Trion.

The Bahamian government has granted Bahamas Petroleum Co. (BPC) a 12-month extension to four offshore licenses south of the islands. This will give BPC until 2Q 2018 to conclude funding discussions and other preparations for a first exploratory well.

The Dominican Republic is inviting proposals for a multi-client 2D seismic survey over its territorial waters. Recently the government opened the country’s National Hydrocarbon Database, compiled by Schlumberger, which contains around 19,000 km (11,806 mi) of local seismic data acquired over the past five decades.

Anadarko’s recent deepwater Purple Angel-1 well in the deepwater Caribbean Sea off Colombia has proven gas, according to partner Ecopetrol. The location was close to the two companies’ 2015 Kronos discovery - based on results from the two wells, Ecopetrol estimates that Kronos has a gas column of at least 520 m (1,706 ft). The drillshipBolette Dolphin, under contract with Anadarko until mid-2018, is due to drill at least four more wells in Caribbean waters.

Premier Oil has revised pre-first oil capex for Phase 1 of the Sea Lion development in the offshore North Falkland basin from $1.8 billion to $1.5 billion. Savings were achieved in part by optimizing the subsea layout of the planned single drill center, while anticipated operating costs have fallen to $15/bbl following work on transportation and shuttle tanker arrangements.

The drillshipAtwood Achiever has spudded an exploration well on the Yakaar prospect on Senegal’s Cayar Offshore Profond block for operator Kosmos Energy. The location is 40 km (25 mi) west of the Teranga discovery - this is the first of multiple wells Kosmos and new partner BP plan to drill in a continuous campaign offshore Senegal and Mauritania to the north.

Total has started production from the Moho Nord deepwater project, 75 km (46.6 mi) off the coast of Republic of Congo. This involves drilling of 34 wells tied back to a new tension leg platform and toLikouf, a new floating production unit. All oil is processed on the FPU and exported by pipeline to the Djeno terminal onshore. All-electric systems optimize the power needed to run the installations, and all produced water is re-injected into the reservoir.

Erin Energy has contracted Pacific Drilling’s drillshipPacific Bora to drill the Oyo-9 well next month on the deepwater Oyo field off Nigeria, followed potentially by wells on two more prospects in Miocene horizons.

Panoro Energy says proposals for a gas development at the deepwater Aje field in Nigeria’s OML 113 license - the field currently produces oil - should go forward for regulatory approval by mid-year.

Cabinda Gulf Oil Co. has produced first oil and gas from the Mafumeira Sul development in block O, 24 km (15 mi) offshore Angola’s Cabinda province in 60 m (200 ft) of water. This is the second-phase development of the Mafumeira field, involving the addition of a central processing facility, two wellhead platforms, 34 producer and 16 water injector wells, and 121 km (75 mi) of subsea pipelines. The production capacity is 150,000 b/d of liquids and 350 MMcf/d of gas,

Odfjell Drilling has a conditional letter of award from a major oil company to drill a well offshore South Africa next year, using the semisubmersibleDeepsea Stavanger.

Lukoil has completed the first dual-lateral, and fourth development well, at its V.Filanovsky field in the Russian sector. This will deliver higher productivity than the three previous single-bore designs, the company said. Work on the fifth well, also a dual-lateral, got under way in March.

The quarters and utilities platform jacket for the Shah Deniz 2 project in the Azeri sector should have been installed, following its journey onboard theSTB-1 barge from the Heydar Aliyev Baku Deepwater Jackets Factory. The 12,084-metric ton (13,320-ton), 105-m (344-ft) tall jacket will rest in 95 m (312 ft) of water. Shah Deniz 2 operator BP said the project was now around 90% complete.

Rockhopper has opened international arbitration proceedings against Italy’s government. This follows last year’s decision by the Ministry of Economic Development not to award a production concession covering the Ombrina Mare oil field in the Adriatic Sea. Rockhopper is looking to obtain damages and compensation claiming the action as a breach of the Energy Charter, which Italy adheres to as a member of the European Union.

Eni has formally agreed to farm into 50% of block 11 offshore Cyprus, operated by Total. The block, awarded in 2013, covers 2,215 sq km (855 sq mi) south of the island - Eni expects the first exploration well to spud later this year.

Montenegro’s government has awarded Energean Oil & Gas an exploration and production concession contract for offshore blocks 4219-26 and 4218-30. These are in water depths of 50-100 m (164-328 ft) close to the coast and near the town of Bar. Energean, which believes the geology is similar to western Greece to the south where it is pursuing the offshore West Katakolo development, will acquire 3D seismic and drill one well during the initial seven-year period.

Israel’s Petroleum Commissioner has approved Noble Energy’s request to batch-drill the seventh development well for the deepwater Leviathan field with the Leviathan-5 well, to streamline drilling costs. The ultra-deepwater drillshipAtwood Advantage was due to spud Leviathan-7 after completing a well on the Tamar field, targeting Oligo-Miocene layers.

Saudi Aramco has contracted NPCC in Abu Dhabi to build and install 17 platform jackets, nine for the Berri field and eight for the Marjan field. Work on the order, due to start by year-end, falls under the scope of a long-term agreement that the two parties signed last October concerning future new platforms offshore Saudi Arabia.

Aramco also has signed a memorandum of understanding with McDermott International concerning the new maritime facility Aramco is developing. McDermott plans to construct a new fabrication facility at Ras Al Khair, which will gradually take on work currently handled by the contractor’s Jebel Ali site in the UAE.

Tanzania’s government has decided to intervene to advance preparations for the country’s first deepwater gas field developments. According to Ophir Energy, a partner to Shell in offshore blocks 1 and 4, the government has formed a negotiating team with representatives from various ministries to deliver an accord for the associated onshore LNG project. Once this and the legal framework have been finalized, development can move forward. The partners in the two blocks are working to complete pre-front-end engineering design ahead of an investment decision.

ExxonMobil will pay $2.8 billion in cash under an arrangement that will give the company 25% of Mozambique’s deepwater Area 4 block, operated by Eni, pending regulatory approvals. Thereafter, Eni will continue to lead the Coral floating LNG project, with ExxonMobil managing construction and operation of the onshore gas liquefaction facilities. Area 4 contains estimated proven resources of 85 tcf.

Anadarko, the other major deepwater operator off Mozambique, recently submitted a development plan to the government for the Golfinho/Atum discoveries, which it plans to connect to its proposed Mozambique LNG project.

ONGC has awarded L&T Hydrocarbon Engineering a $245-million EPCIC contract for the redevelopment of the Neelam field in the Heera-Panna block in Mumbai Offshore, and the B173AC development, both off western India. The scope includes a new process platform with gas processing and compression, three new wellhead platforms, modifications to 11 existing platforms, and installation of a 32-km (20-mi) subsea pipeline.

In addition, ONGC has committed to three further field developments in the area. One is the marginal 1991 B-147 discovery, 110 km (68 mi) from Mumbai, which the company says has become economic thanks to the emergence of new infrastructure in the area. ONGC will commission a new four-slot wellhead platform and an initial three wells, with produced oil and gas sent to onshore terminals at Uran and Hazira.

Total will take a 50% share from PTTEP in the deepwater MD-7 project in the Gulf of Moattama off Myanmar, subject to government approval. PTTEP’s CEO Somporn Vongvutjipornchai said Total had greater experience in deepwater and would therefore help advance activity more effectively. The block, awarded in 2013, has been undergoing 3D seismic evaluation.

Reports suggest Singapore-based KrisEnergy will sign a revised production-sharing contract with Cambodia to develop offshore block A, containing the Apsara oil field. This is the country’s sole commercial discovery to date: KrisEnergy holds 95% of the block, with Mitsui Oil and GS Energy agreeing to exit the concession last October.

Hoang Long Joint Operating Co. has resumed development drilling at the TGT field in the Cuu Long basin offshore southern Vietnam. The jackupPVD VI has been drilling the TGT-H1-30P well from the HI wellhead platform, targeting Miocene and Oligocene reservoir horizons. It was then due to transfer to the H5 wellhead platform to drill two further wells.

Saipem’s Karimum yard in Tanjung Balai Karimun, Indonesia, has held a naming ceremony for the new floating production unitJangkrik. The vessel was then due to head to the Muara Bakau concession in the Kutei basin in the Makassar Strait, for installation at the Jangkrik complex, operated by Eni. The FPU can process and export 450 MMcf/d of gas and will be connected to 10 deepwater subsea wells, with production exported through a new 79-km (49-mi) pipeline to onshore reception facilities for onward delivery to the Bontang LNG plant. There are numerous other gas discoveries nearby that can be tied in in due course, Eni added.