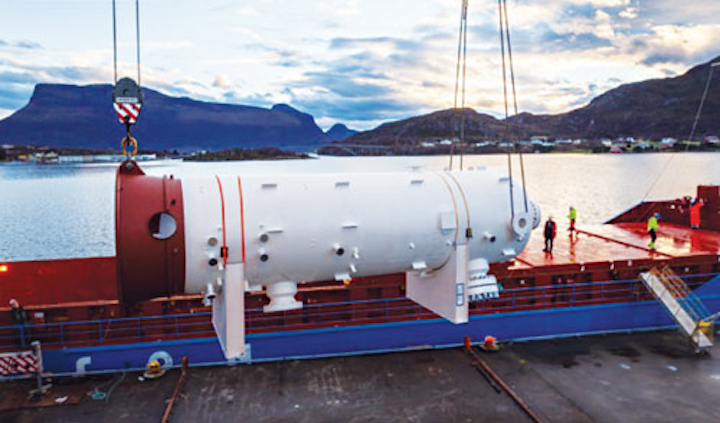 The company’s Drizo process is a method of glycol regeneration that involves stripping solvent from produced natural gas, usually obtained from the BTEX present in the gas. The process is said to achieve higher glycol purities than the alternative approach of fuel gas stripping, resulting in much larger water dew point depressions at up to 100°C (180°F) or more.

For Maersk Oil’s Culzean HP/HT gas-condensate development in the UK central North Sea, Drizo technology has been chosen to address the low flaring capacity on the central production platform. In this case, the process will make use of hydrocarbons present in the inlet gas for glycol regeneration instead of stripping gas, with the result that overhead gases sent from the glycol regeneration column to the flare will be reduced. The associated water dew point is -31°C (-23.8°F), which is easily attained with the Drizo, according to Prosernat, as the technology is designed for dewpoints down to -60 to -70°C (-76 to -94°F), or 1-2 ppm V water content.

In 2014, the company supplied three TEG dehydration systems and a fuel gas module for Lukoil’s Vladimir Filanovsky field development in the northern Caspian Sea, where production started last September. All were installed on the central processing platform. The dehydration packages, manufactured in France, comprised three contactors and three regeneration units, with a total capacity of 49 MMcf/d per package, and two low-pressure and three high-pressure compression trains operating at up to 3.5 MMcm/d combined. The 17 skids for the Balance of Plant (BoP) – all process items to be installed around the compressors, mainly intercoolers and scrubbers – and the two skids for the fuel gas module were all assembled at Heurtey Petrochem’s manufacturing site in Romania. All equipment was transported to the Caspian location by road and boat, and the various systems are currently in the start-up phase as production builds at the Filanovsky complex.

Prosernat’s third delivery is a monoethylene glycol (MEG) regeneration and reclamation module for the Eni-operated Jangkrik gas field development, 70 km (43 mi) offshore Borneo, Indonesia. The 410-metric ton (452-ton) module, built in Batam to satisfy local content requirements, will purify MEG that will be injected at the wellhead to inhibit the formation of hydrates and associated freezing-up of the subsea flowlines. It will treat the mixture of MEG, salts and formation water returning to the Jangkrik FPU, removing the salts and water and recovering over 99.5% of the MEG. This should reduce the risk of corrosion in the subsea pipelines, with smaller circulating volumes in the glycol loop due to the reduced quantities of water, salt and other injected chemicals. The completed module should by now be installed on the FPU, which underwent a naming ceremony in March at the yard in Indonesia.

Later this year, Prosernat is due to deliver two fully modularized SmartSulf sulfur recovery trains, each with a capacity of 100 t/d of sulfur, for an early production facility in Kuwait. SmartSulf is a process developed originally by Linde in the 1980s, later owned by ITS Reaktortechnik in Germany which Prosernat subsequently acquired in 2014. The process involves treating hydrogen sulfide (H2S) for conversion to sulfur: typically it achieves a sulfur recovery rate of 99.5% without the need for a tail gas treatment installation. It is suited to reservoirs with high H2S content acid gas streams and those with low H2S content – in the latter case, the process operates in direct oxidation mode.

Although the Kuwait application is onshore, Prosernat believes the equipment has strong potential for offshore reservoirs with high levels of acidic gas. And despite the fact that handling of H2S offshore has historically presented major operating difficulties, the SmartSulf Equipment can be designed for incorporation into the process facilities of an offshore fixed or floating platform.

As for new developments, Prosernat, in co-operation with Total, IFPEN, and Heriot-Watt University in Edinburgh, Scotland, has conducted a detailed study of the influence of the motions of the FPSO on the performance of amine units installed on the topsides. The program involved deployment of a hexapod, the item on which the experimental gas/liquid (G/L) contactor is installed. In contrast to the single-axis rotating apparatus normally used to simulate an FPSO’s induced motions on G/L contactors, the hexapod, with its six feet, is said to reproduce exactly the movements, accelerations sustained by the amine units and their inclination. Results from the study should help optimize sizing of future amine systems while also ensuring the strict performance guarantees for these upstream liquefaction units.