Narrow pressure windows are increasingly common when drilling in mature deepwater fields, posing a formidable challenge. This condition is characterized by a small difference between the pore pressure - the fluid pressure inside rock pores pushing out - and the fracture gradient - the fluid pressure needed outside the rock to fracture it. 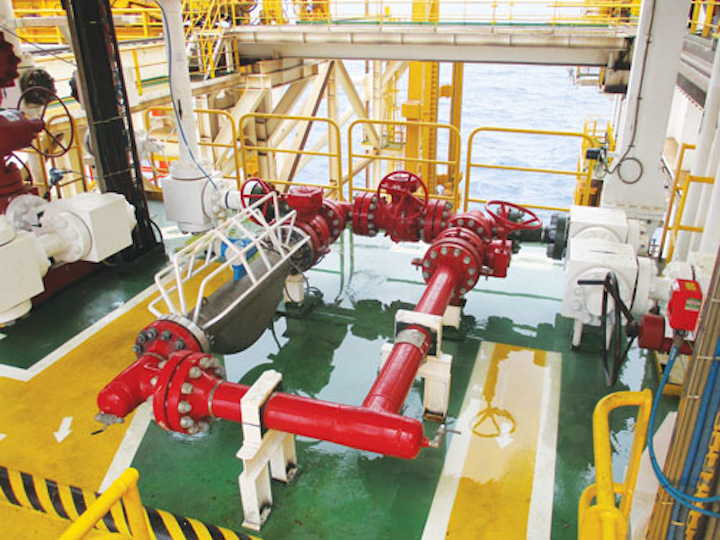 Narrow pressure windows are increasingly common when drilling in mature deepwater fields, posing a formidable challenge. This condition is characterized by a small difference between the pore pressure - the fluid pressure inside rock pores pushing out - and the fracture gradient - the fluid pressure needed outside the rock to fracture it. When using conventional drilling techniques, a small change in wellbore pressure can represent the difference between profitable success or costly failure. Common risks include borehole instability, pressure cycles that require breakouts, downhole mud losses, surge and swab effects, and even kicks. When market conditions are difficult, the thin margin for error means the risks are even more pronounced.

Fortunately, narrow pressure windows can be addressed using managed pressure drilling (MPD), a technique to precisely control the annular pressure throughout the wellbore. MPD is basically a tool to manage equivalent circulating density. It has revolutionized drilling in the major deepwater and ultra-deepwater areas, such as Brazil, West Africa, the North Sea, and the Gulf of Mexico, where it has been used for more than 10 years. Coupled with early kick detection, the technique helps operators avoid issues caused by narrow pressure windows.

One recent instance occurred when Halliburton completed W&T Offshore’s MPD operation in the Gulf of Mexico’s Mahogany field, where the water depth is approximately 370 ft (113 m). The operator encountered a narrow pressure window of one pound per gallon resulting from depletion of the upper reservoir. It was necessary to drill serval intervals safely and effectively, and the operator’s main drivers for requesting MPD were risks of borehole instability, mud losses, and drilling challenges.

The solution entailed use of Halliburton’s latest GeoBalance managed pressure drilling services. The suite of solutions includes the GB Setpoint hydraulic control system, which provides precise, real-time monitoring of multiple points and fluid properties along the wellbore, enabling accurate control of bottomhole pressure. The system allows for automated control and pressurized circulation during the displacement process and the operational phase of drilling.

The GB Setpoint control system is powered by DFG drilling fluids graphics software, which provides a hydraulic model to track the density and rheology of the fluids in real time, enabling immediate calculation of the proper surface pressure for maintaining the required downhole fluid density.

For this operation, fluid densities were designed to be slightly higher than pore pressure, with the control system ensuring constant bottomhole pressure for safe and efficient drilling of the intervals without losses or kicks. The solution required that the borehole pressure at the point of control remain constant while circulating and when pumps were off. This approach also helped eliminate nonproductive time associated with borehole instability and mud losses.

Maintaining control of the operating hydraulic window during trips was crucial to controlling fluid losses and kicks. The hydraulic model enabled real-time changes to the equivalent mud weight, as well as pumping and spotting the kill mud in stages, thereby reducing the amount of mud needed to pull out of the hole. These efficiencies reduced drill time and mud volume, thus reducing costs for the operator.

By design, the well penetrated the known producing intervals, the “P” and “Q” sands, in the highest structural position in the field’s history, enabling a future attic-recovery project in an area of the field with good water drive and recovery efficiency.

While drilling the depleted “P” sands, losses were briefly encountered but quickly mitigated, avoiding a potentially costly event. The rapid mitigation was a result of the operator’s detailed knowledge of the field and the Halliburton team’s experience in early event detection - a testament to the value of close collaboration.

After drilling and casing the “Q” and “T” sand sections, an exploratory tail of approximately 950 ft (290 m) was drilled beneath the main well target; this led to the discovery of an additional pay interval called the “U” sands and extended the vertical column to previously unpenetrated reservoirs. Ultimately, the MPD operation achieved the operator’s well objectives in the primary target zone, logging 149 ft (45 m) of pay in a total of five reservoirs.

Looking ahead, the success of the operation is expected to generate additional drilling opportunities, including extension of the main “T” sand section, a crestal development well for the western “P” and “Q” attic areas, and deeper drilling to exploit the new “U” sands.

In addition to the GeoBalance service solutions, equally important for the operation’s success were careful planning, solid design of service, and meticulous documentation.

Drilling the well without this particular MPD system would have been extremely difficult, risky, and costly.

The operator noted that because of the correct application of technology and the proper expertise, the operation exceeded expectations and helped clarify the abundant potential of the Mahogany field. Tom Murphy, W&T Offshore’s COO, noted that “the A-18 success exceeded our pre-drill expectations and underscores the large potential in the prolific Mahogany ‘T’ sand. It achieved our main well objectives in the primary target zone and logged 149 ft of pay in a total of five reservoirs. By design, the well penetrated the field’s historic producing intervals - the ‘P’ and ‘Q’ sands - in the highest structural position in the field’s history. This sets up an attractive attic recovery project in an area of the field with good water drive characteristics and recovery efficiency.”

Murphy continued: “Our exploratory tail has confirmed the presence of hydrocarbon-bearing sands in a trapped position beneath our currently productive ‘T’ sand and further extends the vertical column in the field to these previously unpenetrated reservoirs. The well’s success is expected to generate several high-quality additions to our organic drilling inventory, including a future extension of the main ‘T’ sand based on this most recent penetration, a crestal development well opportunity to exploit the western ‘P’ and ‘Q’ attic area, and deeper drilling opportunities to exploit and target the newly discovered deep ‘U’ sand.”

Tracy Krohn, W&T Offshore’s chairman and CEO, said that “the A-18 well allowed the company to acquire its first core data from this important reservoir with rock permeability estimated to exceed one darcy, confirming the excellent flow potential of this exceptional reservoir.”

To provide even more automation and control to MPD, Halliburton is pairing the GeoBalance service solution with its BaraLogix applied fluids optimization service density and rheology unit (DRU). The DRU itself is a fully automated, compact skid-mounted unit that measures density and rheology in real time. To maintain a well within the hydraulic window, modeling a MPD scenario entails calculating surface pressure using an algorithmic equation:

Hydrostatic pressure is based on corrections for thermal effects on the fluids downhole, which is crucial in deepwater and high-pressure/high-temperature operations, where actual bottomhole densities vary significantly resulting from fluid heat transfer.

Creating an accurate model requires precise measurement of mud temperature, density, and rheology - data that are crucial for accurate calculations, modeling, and decision-making, particularly when time is of the essence.

Consider the converse: the lower temperature of a mud sample measured sometime after it has been drawn can lead to inaccurate thermal correction in hydrostatic calculations. Moreover, mud systems are constantly being treated, diluted, or weighted, significantly altering overall mud properties, which then impact downhole pressures. An unaccounted pressure variance of 100 psi in a MPD operation could lead to undesirable influxes or losses.