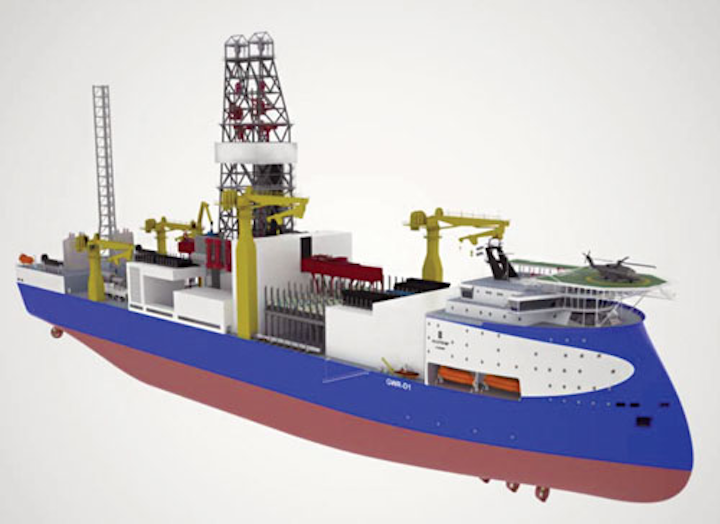 As exploration drilling moves into deeper waters and more remote locations, drillships must address increasingly diverse demands presented by regulations, drilling challenges, and project economics. Drillships must provide the technical capability to drill in difficult conditions, and prevent, manage, and react to emergency situations. In remote and marginal fields, the vessels must also contribute to the greatest possible efficiency and production enhancement.

The challenges of remote and marginal deepwater fields are overwhelming the capabilities of conventional development programs using standard drillships and FPSO vessels. In these operations, the technical difficulty of drilling is further intensified by regulatory and industry emphases on well control and oil spill prevention. Along with complex logistics, these challenges make economic viability a constant factor.

The difficulty of deepwater drilling using conventional technology has led to development of a broad scope of advanced controlled pressure drilling (CPD) methods. However, implementation has been limited by the rig’s readiness to accommodate the required MPD equipment, and the resulting delay in applying MPD techniques when they are needed.

In remote and marginal fields, support for extended well testing (EWT) and production has required the added support of an FPSO vessel. Spill response requires a further additional dedicated support vessel. The safety, logistical, and cost demands of this triple approach are a huge constraint on exploration and development projects.

Building these systems into the drillship’s design requires the integration of specific equipment systems with the rig drilling system and the vessel, and creating the space and capacity to accommodate the changes.

The GWR-D1 design emphasizes safety and efficiency with features for equipment positioning, transit speed and fuel consumption, stability, and station keeping. The hull is designed to produce greater efficiency over a broad range of draft variations, improving overall fuel consumption and transit speeds. It also generates less vibration and minimizes slamming loads that result in lower acceleration levels, and improves working conditions and response during demanding operations and weather conditions.

The vessel supports dual-derrick drilling operations in 3,600 m water depths and drilling depths of 15 km, and provides for 20K psi subsea handling and control systems. Drilling equipment is located in the forward area of the vessel. Mud tanks and mud pumps are located in a module immediately aft of the accommodation block with storage area for top-hole heavy tubulars on top. Bulk tanks are installed inside the vessel hull below the mud module.

Well testing and early production is enabled by a production capacity of 30,000 b/d, while the oil containment system provides 100,000 b/d capacity, as well as an offloading system and flare boom. The vessel has an overall oil storage capacity of 730,000 bbl.

The 12 x 12 m aft moonpool supports production facilities, allowing flexible risers from subsea production trees and the seabed to be connected to the onboard facilities. Production equipment is located on modules behind the aft moonpool.

The area between the two moonpools provides dedicated space for the handling, and pressure and function testing of subsea production trees. The trees can be deployed through either moonpool, along with ROV hangar, handling, and control systems, allowing deployment of ROV’s over both sides of the vessel. Tubular storage and handling for drill pipe and casing is located above this area.

Complete coverage of the deck areas for handling services and equipment is provided with four knuckle boom cranes. One of the cranes has an active heave compensation system to provide redundancy in the installation of subsea production trees over the side of the vessel.

The drilling equipment package is a dual well center system capable of drilling to 50,000 ft in 12,000 ft water depth. It has a main rig lifting capacity of 1,500 short ton achieved with an active heave compensated (AHC) drawworks to improve lift and efficiency. Drilling operations are monitored and controlled from a four-chair driller’s control room.

The riser is stored on the elevated main deck and brought to the pick-up table by the riser crane. The crane moves the riser joints into the riser-feeding machine (RFM) for delivery to the well center, and the top-drive elevator for lifting to vertical and lowering into the sea. The drilling riser is comprised of 75 ft joints designed for 12,000 ft water depth and 15K psi. The rig accommodates two subsea BOPs with subsea handling systems equipped for 20K psi subsea units weighing up to 650 mT each.

The drillship design includes an AFGlobal Advanced Drilling Systems riser gas management (RGM) safety system and a managed pressure drilling (MPD) system. The subsea and surface equipment is used to control pressure along the full length of the wellbore and riser to safely manage high fluid flow return rates. It is deployed with the subsea riser to enable contingency RGM and MPD operations. The system allows the use of MPD applied surface backpressure (ASBP) during a well control event to rapidly overbalance the wellbore and stop any formation fluid influx prior to closing the subsurface BOP. When not in MPD mode, the ADS can rapidly seal the top of the riser when a kick is detected and hold additional ASBP until the subsurface BOPs are closed.

The ADS MPD subsea components include the riser sealing MPD active control driller (ACD), which is used to seal in the wellbore with up to 3,000 psi ASBP to allow MPD operations. The MPD systems are deployed through the rotary table the same way as a riser joint, reducing operational risk and deployment time associated with moonpool installations.

Deployment of ADS MPD components beneath the slip joint avoids having the slip joint govern the MPD maximum pressure limit for the riser system. While conventional slip joint packers are rated to 250 to 500 psi, the ADS MPD riser system is capable of holding up to 3,000 psi of ASBP depending on the mud weight and sea water depth. The MPD equipment conforms to industry codes API 6A, API 16A, API 16RCD, API 16R, API RP 17G, API 17K, DNV OS E101 and ABS CDS.

An API 16A 3,000-psi drillstring isolation tool (DSIT) annular packer on the riser system allows the open hole to be closed in three seconds. The ADS DSIT compensates for the 45-seconds required to close an annular subsea BOP, and provides the additional time needed to prepare to shut-in the subsurface BOP and activate the rig’s diverter. This rapid well control response prevents influx volumes from exceeding kick tolerances. It also protects against rapid riser flow and possible unloading prior to closing the rig diverter, which avoids the environmental impact of overboard diversion after closing the rig diverter.

Activating the API 16RCD monogrammed ACD allows the rig to operate in constant bottomhole pressure or mud cap drilling MPD modes, wherein the riser is sealed on the drillstring and riser flow returns are diverted by the ACD and subsea flow spool to the surface pressure control and metering manifolds and through the MGS. This allows wellbore pressure to be managed to control an influx (well control) or to navigate narrow formation pressure windows while drilling. 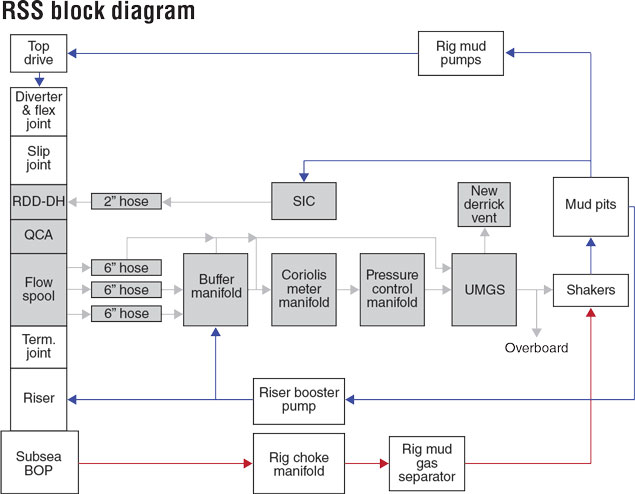 The ACD has an API 16RCD rated active sealing system allows seal sleeve wear to be compensated for by increasing hydraulic closing pressure on the ACD annulars, which allows maintenance of the desired ASBP. A wellbore seal is activated with dual spherical DSIT annular packers that compress a dual polymer seal wear sleeve around the drillstring. Wear rates are reduced by lubrication of the seal face between the drillstring and the seal sleeve by injecting clean active drilling mud to reduce heat and friction during dynamic stripping and rotation of the drill pipe.

Dual programmable pressure relief valves (PRVs) are fitted to the distribution manifold (DM), which safely relief vents to the MGS. The DM PRVs protect the riser, subsea ADS MPD and surface systems, formation and casing from overpressure, and are programmed to not bleed off ASBP when using a statically underbalanced MPD mud weight.

If riser gas is detected, the RGM system is activated to close the DSIT, sealing the riser in three seconds and diverting riser returns from the ADS flow spool to the pressure control manifold via two subsea 5.5-in. API 17K hoses.

The SCADA system uses the MPD pressure control manifold to apply 300 psi ASBP to the riser to immediately overbalance the wellbore and control multiphase return flow from the riser. Flow downstream of the PCM returns to the mud gas separator where gas is removed, versus conventional discharge of all riser fluids overboard. At this point, the driller can continue holding 300 psi ASBP or increase ASBP. The riser booster pump may be used to circulate gas out of the riser above the closed SS BOP in a safe and controlled manner.

Once gas is removed from the riser and flushed from system, the ASBP can be staged down and a flow check can be conducted with the pressure control manifold or the level sensors in the MGS to confirm the riser gas has been killed.

During cementing, running casing, and other activities conducted in a conventional open, overbalanced mode, the RGM DSIT can be used to rapidly stop an influx event, or deal with an RGM event above the subsurface BOP.

Testing, production, and spill response options are based on the vessel’s dual capacity EWT package. The package acts as a standard EWT or an early production system (EPS) for sales quality output up to 30,000 b/d. It can also provide well response with an ability to handle up to 100,000 b/d of fluids and 200 MMscf/d of gas by containing and storing the fluid, and separating and flaring the associated gas.

An oil storage capacity of 730,000 bbl enables the drillship to store oil produced from extended well testing or early production operations. The main dual fuel engines enable use of field gas to reduce operating costs and the amount of produced gas being flared during well testing or UBD operations.

The process package supports various modes of operations such as UBD that involve well fluids being produced while drilling, and facilitates onboard hydrocarbons handling instead of flaring/burning. Hydrocarbon fluids can be processed with equipment installed on the drillship, stored in onboard tanks, and commercialized by offloading to shuttle tankers.

One of the challenges faced in the Macondo oil spill was the mobilization and coordination of several vessels operating in close proximity. The new drillship design addresses this challenge with the capacity to act as a single oil spill surface containment vessel.

One key advantage of the new drillship design is that the operation of a single vessel simplifies the logistics and operational coordination. Furthermore, a single vessel with a full capacity of 100,000 b/d of fluids and 200 MMscf/d will not involve the flow splitting problems encountered when using several separate vessels.