This second of a three-part series outlines the basis of the empirical approach to estimating abandonment remediation probability and describes the general methodology. 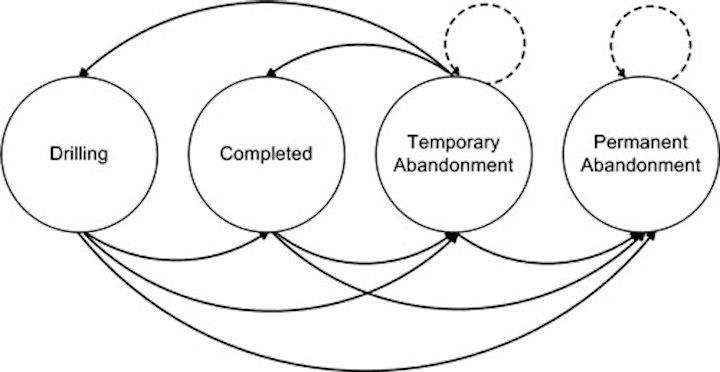 This second of a three-part series outlines the basis of the empirical approach to estimating abandonment remediation probability and describes the general methodology. The proportion of wells requiring remediation describes a specific attribute, leaking after abandonment. The sample proportion is an unbiased statistic of the population proportion, and the larger the sample size, the tighter the expected clustering.

Nine wells were identified that required remediation leading to a remediation probability of 1.8% and a 95% confidence interval ranges between 0.6% and 3.0%.

Over its lifetime, a well will transition between states one or more times, but eventually, all wells are permanently abandoned.

A well drilled for the purpose of exploration may or may not be completed as a development well, but most wells drilled for development - unless unsuccessful (i.e., uneconomic or problems arise such as collapsed tubing or shallow water flow) - are completed. If a well is completed, it will be producing, inactive, or serve as an injection well, and may transition to temporarily abandoned status before being recompleted or permanently abandoned. Wells are temporarily abandoned at different times during its lifecycle and for many different reasons. All states are transitory except permanently abandoned.

Completed wells that are found leaking, or pressure tests that are not successful during abandonment operations, are remediated as part of normal business activities. Abandoned wells that are found to be leaking after operations are performed require remediation, represented by the dotted arrows that exit and re-enter the temporarily abandoned and permanently abandoned states. A permanently abandoned well that exhibits leaking/bubbling may be reclassified as temporarily abandoned until the operator successfully remediates the leak.

After an exploratory well is drilled, it will be temporarily abandoned awaiting a decision on completion, permanently abandoned, or completed for production. With the drilling rig on site and no production tubing in the hole, abandonment operations on exploration wells are easy to perform and reliable. The conventional placement method for cement plugs follows the same flow path as the drilling fluid during drilling, where the fluids are pumped downhole through the inside of the drillstring, turn the corner at the bottom of the pipe, and then go upwards in the annular space between the pipe and the open hole/outer pipe. The drillstring is then retrieved before the cement hardens.

Rig-based abandonments for exploratory wells have their own risk-profile for bubbling and leaking but were not of interest in this study since tubing strings and the leak paths they potentially create will generally not be installed. Temporarily abandoned wells may be re-entered later for completion by drilling out the cement plugs, or if the hole is dry or of no further utility, it will be permanently abandoned. 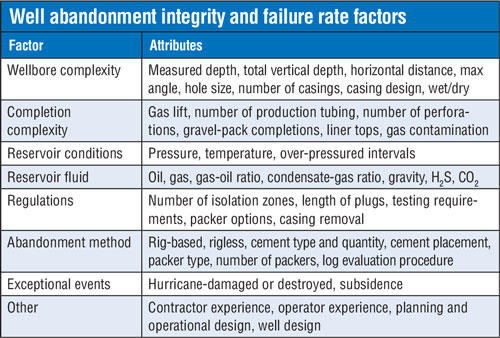 Wells for production or injection need to be completed. A completed well contains a group of one or more contact intervals with stratigraphic zones that function to produce or inject fluids. Tubing is used to transmit fluids and a completion must be capable of isolating fluid flow. Completion operations may occur immediately after drilling or at a later time. At any point in time, completed wells are either producing or inactive; inactive wells are classified as suspended or shut-in. Shut-in and suspended wells involve closing one or more valves on the tree and do not require cement plugs.

Wells in temporarily abandoned status become permanently abandoned when all cement plugs have been placed and tested as per regulatory requirements or approved departures, and all casing string cut to a minimum 15 ft (4.6 m) below the mudline as per regulatory requirements or approved departure. If plugging and isolation activities were previously performed, then taking a well to permanently abandoned status will only involve cutting casing strings and pulling operations at shallow depth. Operators cut and remove casing 15 ft below the mudline shortly before the platform is removed.

Failure mechanisms.Well abandonment failures arise from many possible factors due to mechanical causes, such as the failure of the cement or the cement bond to the pipe, or geologic factors, such as subsidence and compaction. Other factors also play a role in abandonment failure, but because failures are difficult to diagnose and likely impacted by multiple factors, root cause analysis is usually speculative.

One of the problems with old wells is the lack of documentation. Well designs are often modified by workovers if repurposed during its life, and if the new design is not documented, the P&A procedure will have to adapt to these changes on-site which increases the uncertainty and complexity of operations. Poorly maintained wellbores can add obstructions and limit access to sections of the well. Older completion methods may present greater well integrity issues due to mechanical causes or corrosion.

A leak is defined as the expression of reservoir fluids (liquid or gas) and occurs when one or more barriers fail, individually or in combination, sequentially or simultaneously, resulting in a leak path. Unless a failure is detected, however, it will not be reported, and so failure rates also depend critically upon detection and monitoring.

Fault tree analysis. A fault tree is a logic diagram portraying the combination of component failure events necessary to cause a system failure, and is a common tool in risk analysis. To determine leak probabilities, fault trees are constructed for a particular well configuration and hypothesized leak paths. For a leak to occur, one or more components in the well have to fail and lose their ability to contain the fluids within the well. Leak paths are used to construct a fault tree, and by assigning a probability of failure to each component, the fault tree is used to calculate the probability of leakage. 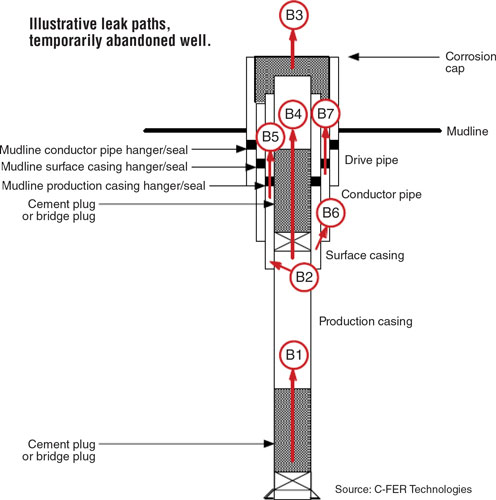 A permanently abandoned well has potential leak paths similar to a temporarily abandoned well, but now there are two cement plugs to prevent leakage and at least one mechanical barrier according to federal regulations. Fluid has to leak past the zone isolating plug (B1) and the lower casing plug (B2), and once in the upper portion of the casing, fluids may leak to the surface casing (B4) and to the mudline through the hanger/seal assembly (B5). From the surface casing, a leak may progress through the conductor pipe (B6) and hanger assembly (B7). Fluids may also leak past the surface plug (B3) to the mudline.

Oil and gas wells. Oil and gas wells are expected to have a different risk profile. In oil wells with little or no gas pressure, the potential for liquids inside the well to flow to outside the well is reducing because of the fluid gradients that increase the outside pressure with increasing depth. Gas wells are not affected in the same way, since the lack of liquid hydrostatic pressure allows more pressure near the surface than possible in an oil well. If gas leaks into a well, the buoyancy will drive upward toward the wellhead.

Fault tree models. Fault tree models are helpful to visualize the possible leak paths and to quantify theoretical failure rates, but unless the pathways or failure rates are based on real world observations, they provide limited quantitative data related to actual experience. Leak path diagrams are more varied and complex than “representative” models can describe, literally varying well-by-well and operator-by-operator in a manner that is not easily diagnosed/observed. More importantly, the data required to populate fault tree models neither currently exist nor can be reliably estimated at the present time. The use of fault tree analysis for abandonment leak probabilities is therefore mostly a pedagogical (academic) exercise, based on theoretic underpinning, but lacking the data required to specify actual failure rates.

To establish quantitative information on leak probability, it is useful to observe historic performance and estimate probabilities empirically. Empirical methods provide direct quantitative information on leak probabilities based on actual experience, but do not inform the mechanisms involved in leakage or root cause analysis because the statistics are derived from observational data, with their attendant limitations, and therefore cannot provide a deeper understanding of why a particular wellbore failed.

Remediation probabilities are believed to be on-the-order of a few percent, almost certainly less than 10%, or they would be more commonly discussed in the literature and a greater point of concern for industry and regulators, probably less than 5%, and possibly less than 3%. Abandonment leaks are believed to be greater than blowout probabilities but not extremely rare events, say on-the-order of 0.1% or less, since leaks occur and are known to occur as part of normal abandonment activity.

In the oil and gas industry, empirical probabilities are commonplace because theoretical models are often complex and multidimensional and difficult to populate with meaningful data. One of the best and simplest means to estimate probability in such cases is to adopt a “systems” perspective and apply statistics to help characterize the system. 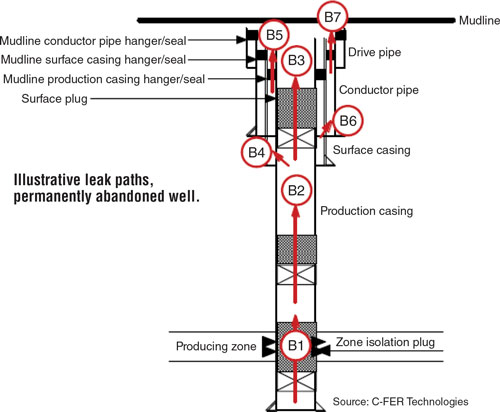 To estimate the occurrence of a low probability event, it is necessary to randomly select data from a large population and apply the frequency interpretation in evaluation (i.e., count the occurrence of the event in the random sample and divide by the sample size). The basis for empirical assessment is information regarding past events.

There is uncertainty regarding whether past events can be extrapolated to the future because of technology improvements, changes in well types and geologic environments, operator experience, regulatory requirements, etc. change over time, but assuming similarity holds - which is another standard industry practice and assumption - empirical probabilities are expected to quantify and reflect risk profiles of similar operations under similar conditions.

Some of the basic sources and parameters of the study are outlined.

Sample period.Well abandonment activity can be randomly selected across the entire time period (2004-2015), and subsequently tracked after operations were performed, or activity data may be sampled for a particular year within the period. The differences between the sampling procedures are minor, and the results should be similar as long as an adequate future time window is employed to detect leaking events.

Shallow-water (<400 ft or 122 m), dry tree development wells define the well class. The vast majority of well abandonments in the shallow-water Gulf of Mexico are dry tree wells associated with fixed platforms, well protectors, and caissons. Deepwater wells and subsea wells were outside the scope of this study.

For a randomly selected abandoned well in 2010, the well either leaks (fails) or does not leak after abandonment operations are performed. For a random sample of observations, the occurrence of all events is recorded and the probability of abandonment remediation is estimated from its frequency of occurrence.

This study was performed on behalf of Oil & Gas UK and has not been technically reviewed. The opinions, findings, conclusions, or recommendations expressed in this article are those of the author, and do not necessarily reflect the views of the UK Oil & Gas Association. Funding for this research was provided through the Oil & Gas UK.