In pursuit of a safer and more cost-effective best practice approach to liquid-based rigless/riserless interventions, the oil and gas industry is engaged in a growing movement to identify new techniques and technologies that can help it to maximize revenues from existing brownfields and new assets by enhancing their output. 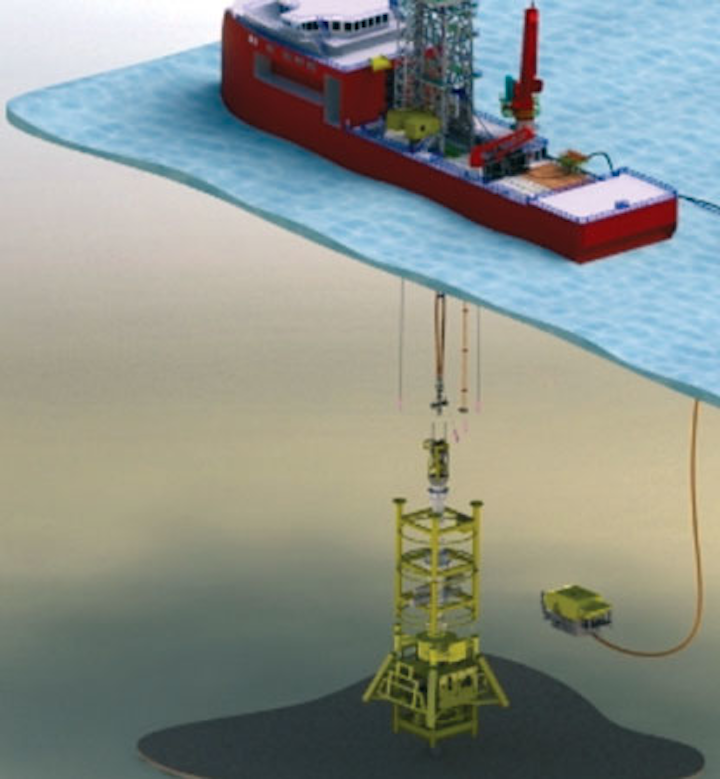 In pursuit of a safer and more cost-effective best practice approach to liquid-based rigless/riserless interventions, the oil and gas industry is engaged in a growing movement to identify new techniques and technologies that can help it to maximize revenues from existing brownfields and new assets by enhancing their output.

A recent groundswell of investigation, analysis, and reporting at major conferences has centered on how the industry can improve its approach to subsea well intervention. This is largely being driven by a significant upturn in global activity in the sector, which has intensified to the point that new API standards are now being written specifically for rigless interventions. A wave of fresh understanding has aroused renewed enthusiasm among operators and service companies to explore new ways of tackling what is a complex and expensive operational challenge.

In a “lower for longer” environment, operators are calling for more technological innovation to allow progress in the rigless intervention market by reducing complexity and increasing efficiency.

At the heart of the matter is the practical issue of accessing subsea wells more easily and intelligently. Yet despite high success rates among rigless interventions, there is still a risk-averse culture in this area, which is reflected in widely-recognized data that shows the considerable drop in intervention activity in more complex and expensive environments - namely subsea and deepwater.

Secc’s technological focus over the last decade has been to develop the best available, safest technology, most practical and cost-effective connection technology to allow DP-2 vessels to securely access subsea wells via open water downlines such as coiled tubing or composite pipe. Working in partnership with operators, OEMs, consultancy firms and subsea service providers, the objective has been to facilitate interventions while reducing unnecessary costs and equipment. In so doing, the company has developed a portfolio of connection solutions that enhance production from subsea wells and demonstrate how liquid-based interventions can deliver equally valuable results as topsides interventions.

Central to this work is the company’s Hot Make Hot Break (HMHB) self-sealing and reconnectable Emergency Quick Disconnect (EQD) technology, which enables operators to access subsea wells from a range of subsea production assets. These assets can include manifolds, PLEMs, PLETs, or even subsea trees using a fluid conduit delivered by a conventional DP-2 vessel. The HMHB technology provides a safe, user-friendly, and, in its optimal configuration, permanent connection solution.

The technology is based upon a pressure-balanced connector designed as a safety mechanism to enable live open-water intervention. In case of vessel drift off, the connector’s self-sealing, dry-disconnect design protects subsea and topsides assets, personnel and the environment. Passive at its core, the HMHB disconnects mechanically and autonomously in a worst-case scenario, such as in the case of a vessel experiencing a black-out or losing dynamic or directional positioning. In spite of this, premature disconnection is avoided because the technology is not affected by internal separation forces.

For disconnection to take place, all that is required is for the male connector to sense a pull or tension from a downline attached to the coiled tubing. Once the male is disconnected, both ends of the line self-seal while holding up to 15,000 psi at each end, simultaneously preventing the contents of the coiled tubing from escaping into the ocean, and ensuring that the subsea well is sealed.

Considerable operational savings can be made using this fit-for-purpose technology. It effectively removes the need to commission light well intervention vessels, rigs, drillships, or vessels equipped with diver spreads and other intervention technologies. Operators are realizing significant capex and opex savings by simplifying their approach to well interventions, so that they are no longer required to commission vessels loaded with unnecessary and expensive equipment.

The technology is enabling operators to not only move away from the most expensive riser-based techniques which incorporate mobile offshore drilling units (MODUs). But even more than this, they are bypassing riserless light well intervention and hydraulic stim units, and moving toward a new methodology - riserless production. This category is so-named because it involves permanently mounting the HMHB on the well’s subsea production equipment (assets can equally be retrofitted). This USB-style, plug-and-play methodology allows instant access to subsea architecture and reservoirs as early as first oil.

Major operational and cost benefits can be realized by operators installing the HMHB on the subsea manifold where it creates a permanent access point; a retrofit option also exists. In most cases, this is the most advantageous set up and leads to the following benefits:

As a permanent access point, the HMHB offers a cost-effective insurance mechanism against potential well and flow assurance issues, with the estimated cost of a single HMHB access point making up just 1-2% of a standard manifold build.

During a review of its reservoir stimulation capabilities, one global operator selected the HMHB as the connection solution for its high-rate acid stimulation scheme. Its challenge was to create a high-pressure, high-volume solution that would enable back-to-back live stimulations from a monohull vessel at a rate of 56 bbl/min - levels previously only achieved using a MODU with riser system.

The successful project relied on the HMHB to manage the risk of the topsides vessel losing DP during the pumping phase, when the impact of loss of containment would be at its highest. The male part of the HMHB was connected to the rigless intervention package via an open-water downline. Its receptacle was installed on the rigless intervention package. Said package is typically used for wireline, which is then deployed and landed on the well. The downline, fitted with male part of the HMHB connector, was then guided into position by an ROV and mated with the subsea end on the rigless intervention package. The connector’s full-bore design meant that pumping rates and fluid volumes were not compromised, and the HMHB’s four-inch bore maximized flow, allowing the operator to sustain the rate of 56 bbl/min it needed to achieve.

The significant achievements of this project illustrate the benefits of rigless, open-water stimulation as a viable, safe, convenient and cost-effective approach to intervention and signal a notable step-change in what can be achieved through this intervention methodology.

The practice of pre-installing the Hot Make Hot Break EQD system on the manifold to allow a DP-2 vessel to carry out flow assurance, hydrate remediation, and well stimulation maneuvers from a single access point on a subsea manifold has been undertaken by Secc’s clients since 2014.

Rigless production was used by another major oil exploration and production company to complete a series of successful scale squeezes on two of its North Sea subsea fields. The operator used the HMHB to carry out the live, open-water scale squeezes for the first time without intervention equipment. The process involved performing a number of chemical injection treatments from a DP-2 vessel to maintain production from two of its subsea wells.

Moving away from having to mobilize intervention equipment from one region of the world to another is an important aim for this industry, and the HMHB is enabling companies to do this swiftly, safely, and conveniently. The technology is allowing work to be executed from a wider pool of multi-service vessels, which in turn is leading to seven-figure cost savings as the need for large equipment spreads is bypassed.

In light of its performance, the company subsequently installed additional HMHB connectors, which have been permanently mounted on newbuild projects also in the North Sea.

As part of its drive to simplify and improve well intervention techniques and help companies to future-proof their subsea assets, Secc’s rigless production method has also been shown to deliver significant advantages. The method employs the HMHB as a permanent safety mechanism by building access points on current or newbuild subsea production equipment, such as an extension to the manifold, or on an access point that is directly engineered into the manifold system. The retrofit approach relies on connecting onto a manifold’s spare hub via seabed equipment outfitted with an HMHB. Additionally, the HMHB can be mounted on a PLEM or a PLET, and potentially directly onto a subsea tree. In so doing, the need for intervention equipment has effectively been removed, giving operators optimal flexibility for regular, cost-effective interventions.

The HMHB connects the vessel safely with the manifold subsea, typically via an open-water downline. In this way, all forms of liquid-based interventions can be carried out on individual wells, while neighboring wells are left to continue to produce through the manifold. Tapping the manifold in this way gives complete access to the subsea infrastructure.

The HMHB can also be equipped with a hydraulic or other powered system to allow a controlled disconnect, and can be designed to reconnect subsea for procedures such as flushing, in line with the spirit of API 17g2, the rigless specific standard.

Having a well-enhancement strategy in place at the build stage, before production begins, means stimulation will only require deploying a DP-2 vessel, overboarding the male and mating it with female via open water downline.

Several studies between Secc and its partners have identified a number of market needs that can be addressed by the HMHB solution and its related technologies. A collaboration with Mexico’s national oil and gas research organization IMP (Instituto Mexicano del Petroleo) provided a recent case study. This effort was undertaken in preparation for the development of Mexico’s deepwater fields. In this case, it was recognized that there was a need to create entry points and connections that could easily be accessed by an ROV’s depressurization and remediation kit. This would enable the removal of blockages in the flowline by applying a vacuum. Alternatively, a vessel can connect to said point and pump chemicals and inhibitors throughout the entire field. The collaborative effort also concluded that these intelligent access points should not be limited to manifolds, but also applied to trees and PLEMs, to increase productivity of future fields.

The subsea intervention industry is witnessing an important new era in technological innovation, fueled by the widespread desire to find safer, easier, and more cost-effective ways to maximize output from existing brownfields and new assets. A key component of this effort is Secc’s Hot Make Hot Break technology, and its plug-and-play capability allows instant access to subsea wells without the need for specialist vessels or equipment, delivering considerable time and cost savings.