Hardware is slotting into place at some of the North Sea's major new field developments. 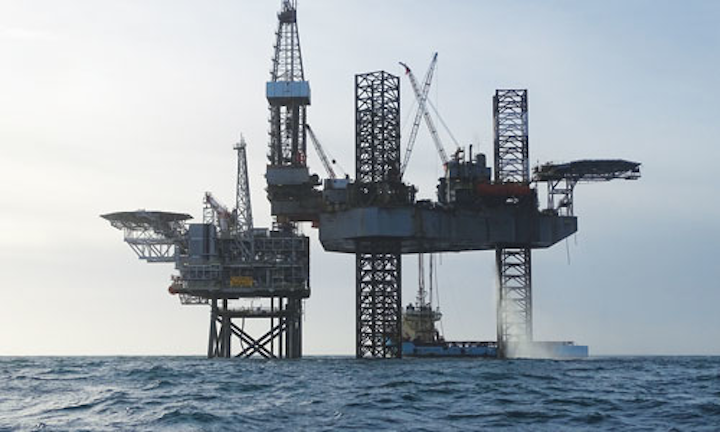 Hardware is slotting into place at some of the North Sea’s major new field developments. In the UK southern gas basin, ENGIE E&P UK has delivered first gas from the Cygnus Bravo wellhead platform, the final component of the project which started up late last year via a three-platform complex 7 km (4.3 mi) to the northwest. The second drill center at Bravo should extend the plateau production of 250 MMcf/d that Cygnus Alpha has provided for the past eight months. All the gas is commingled and exported through a 55-km (34-mi) pipeline connecting to the Esmond Transportation System, which lands at the Bacton gas terminal on the English east coast.

Heerema Marine Contractors’ crane vesselThialf has set down the final two jackets at Maersk Oil’s high-pressure/high-temperature Culzean field in the UK central North Sea, for the central processing facilities and utilities/living quarters platforms. All were built by Heerema Fabrication Group in the Netherlands, the wellhead platform jacket having been installed last year. The three jackets have a combined weight of more than 22,000 metric tons (24,251 tons) and have a design life of 40 years, much higher than for previous North Sea jackets of this size. Sailaway of the topsides should start next year with first gas anticipated in 2019. Together, Cygnus and Culzean should supply 10% of the UK’s daily gas needs.

In the Norwegian sector, theThialf has installed the first of four giant jackets for the Johan Sverdrup Phase 1 development. According to operator Statoil, the 140-m (459-ft) tall, 26,000-metric ton (28,660-ton) jacket is currently the largest anywhere on the Norwegian shelf. The Thialf has had a busy summer schedule, having earlier completed the offshore removal of CNR’s Murchison platform on the UK/Norwegian offshore median line, offloading the lower part of the steel 14,000-ton jacket to the quayside of AFOD’s Environmental Base in Vats, Norway. The platform had been installed in 1980 and ceased operating in March 2014.

Britain’s Oil & Gas Authority has offered 813 blocks and part-blocks across mature parts of the UK continental shelf under the 30th Offshore Licensing Round. Acreage offered includes numerous prospects and undeveloped discoveries, and some areas that had not been made available since 1965, throughout the North Sea, East Irish Sea, and west of Shetland. Applicants can also make use of the new Innovate License developed with the industry, designed to promote more flexible and variable licensing conditions. Bids are due in by Nov. 21, with awards to follow next spring. The 31st Round that follows will likely focus on frontier UK areas, some covered by last year’s government-funded seismic surveys offshore South West Britain and over the East Shetland Platform.

Earlier, the OGA had awarded 12 licenses covering 11 blocks to 11 companies under the 2016 Supplementary Offshore Licensing Round, again with flexible terms. Five of the awards were for work programs that concern potential developments or re-development of fields where production had ceased. Independent Oil and Gas (IOG) gained a license for block 48/25a in the UK southern North Sea, which includes the western part of Vulcan North West, one of the Vulcan satellites that the company aims to develop and connect to the Thames pipeline system. In addition, IOG has submitted its first field development plan to the OGA for its proposed Blythe gas hub in the same area, covering the Blythe and Elgood fields where combined reserves are estimated at 56.3 bcf.

Statoil’s latest exploration campaign in frontier parts of the Barents Sea is not going quite as planned. After the company’s initial success, proving oil in the Kayak structure, the second well on the Blamann prospect in the southern part of the sea, drilled by the semisubmersibleSonga Enabler, encountered modest volumes of gas (10-20 MMboe). The subsequent well on Gemini North, 30 km (18.6 mi) north of OMV’s promising Wisting oil discovery, intersected a 19-m (62-ft) gas column and a 5-m (16.4-ft) oil column in a poor-quality sandstone reservoir. Statoil has written this find off as sub-commercial.

In the Norwegian Sea, the two world-first subsea gas compression trains at Statoil’s Åsgard field, which started service in 2015, have both exceeded 25,000 hr in operation. According to MAN Diesel & Turbo, which engineered and supplied the HOFIM motor-compressor units, availability of the two trains to date has been close to 100%, with the limited interruptions caused by failure of the power supply from the host platform. Subsea compression should extend the productive lives of the Åsgard field reservoirs by 15 years, allowing Statoil to extract a further 306 MMboe.

Repsol looks set to submit a revised development plan this fall for the Yme field in block 2 in the remotest area for discoveries in the southern Norwegian North Sea. According to the Norwegian Petroleum Directorate, Repsol wants to install another jackup with drilling and process systems to produce the field’s remaining reserves: original developer Statoil shut down the field in 2001 after five years of production, removing the jackup and subsea facilities. Talisman Energy (latterly acquired by Repsol) then made an abortive attempt at a re-development, with the second jackup platform, built in the UAE, proving to be structurally unsound and therefore unusable.

Centrica and Bayerngas Norge have agreed to create a new independent E&P company combining production from their fields offshore Norway, Denmark, the Netherlands, and UK. The new entity will have probable 2017 output of 50-55 MMboe from 27 producing fields, with 66% of its total reserves and resources comprising gas. Some of the major active fields in the portfolio, operated or non-operated, are Morecambe Bay in the East Irish Sea, Cygnus and Markham in the southern gas basin, and Valemon, Ivar Aasen, and Statfjord offshore Norway. Development projects include Fogelberg, Maria, Oda and Skarfjell (all Norway), and Hejre and Solsort in the Danish sector. The joint venture plans to invest $518-777 million/yr to deliver sustained output of 45-55 MMboe annually.