With a growing number of aging offshore/deepwater wells and increasingly stringent regulatory requirements, plug and abandonment (P&A) is becoming a more complex issue and a more costly, time-consuming initiative. New technologies, such as the Weatherford Endura dual-string section mill, can improve on the capabilities of conventional P&A techniques to enable a permanent and impermeable rock-to-rock cement seal that covers the entire borehole. As a result, operators can complete P&A operations faster, at a lower cost, in compliance with regulations, and with less long-term risk. 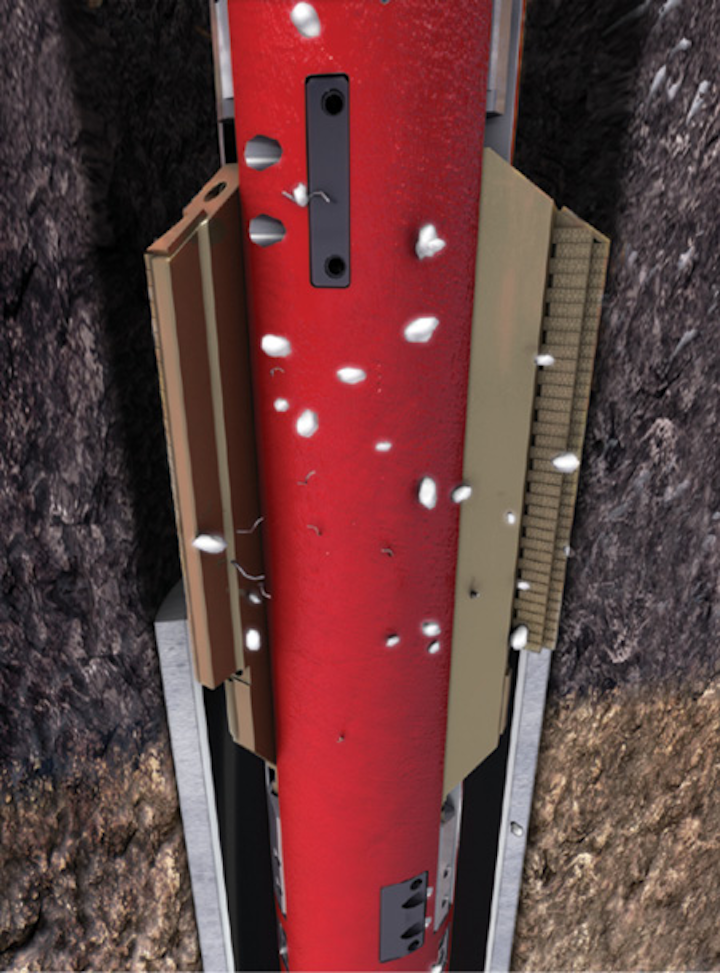 Ensuring wellbore integrity remains a critical need long after a well has reached the end of its productive life and economic feasibility. During the plug-and-abandonment (P&A) phase of the well lifecycle, operators must erect a permanent and impermeable barrier within the wellbore and the formation to prevent the escape of hydrocarbons. Preventing leaks is important not only from an environmental perspective but also to mitigate the potential future economic impact on operators, who remain financially and legally responsible for their abandoned wells. 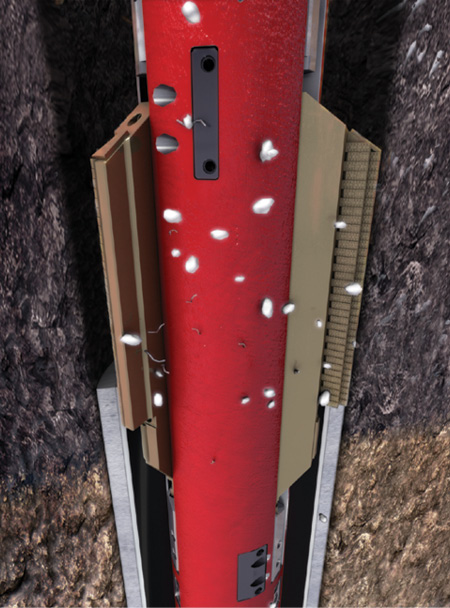 After the DSSM’s cutting blades open a window through the 133⁄8-in. casing, the 17-in. milling blades mill the remainder of the casing to set the stage for a competent cement to formation bond. (All images courtesy Weatherford)

Operators want to meet the regulatory requirements for P&A while at the same time limiting total operational expenditures. Other than removing the liability associated with an unsecured well, P&A offers little return on investment when compared to the costs incurred. In the past, the industry has seen decision-making that can have catastrophic consequences later. Not only do leaks create an environmental hazard, but also relocating abandoned offshore wells on the seabed and the consequential leak remediation can cost many millions of dollars. Several recent high-profile leaks from abandoned wells offshore Australia underscore this point.

Australia has a vast amount of offshore oil and gas wells. This large number of offshore/deepwater assets means that, as more wells age, offshore P&A and optimal methods for leak prevention will be increasingly prominent issues for the region. Furthermore, regulatory requirements dictating the material, length, and depth of cement plugs—according to specific wellbore parameters—are becoming more stringent. As a result, service companies are developing new technologies and techniques to help operators achieve permanent, compliant, efficient, and cost-effective P&A.

The perf, wash, and squeeze method involves perforating tubulars at selected depths across production zones and then squeezing cement slurry into the annulus. Once it hardens, the cement acts as a seal against pressure from above and below, and prevents the migration of hydrocarbons from the formation.

In certain applications, this method can be effective in providing a long-term barrier between the wellbore and formation and mitigating hydrocarbon leaks. However, it is not always the optimal choice for offshore/deepwater environments in which the stakes—and penalties—associated with P&A failure are high. It is not always evident whether a perf, wash, and squeeze job is truly validated and it is possible to leave wells vulnerable to cement channeling when the slurry fails to uniformly set between the casing and the borehole. When this happens, micro-annuli can form between the outside diameter (OD) of the casing and inside diameter (ID) of the wellbore. If there is a poor cement job, downhole pressure can enable hydrocarbon migration through the cement and result in leaks at the surface.

Additionally, the perf, wash, and squeeze method may not adhere to regulatory standards for offshore/deepwater environments because it does not provide a solid, uninterrupted open-hole plug. With growing frequency, regulators are calling for the removal of entire sections of casing to expose the rock face and enable setting cement plugs across the entire borehole, which results in a rock-to-rock barrier and cement-formation bond. Indeed, this is occurring across Australia.

Achieving a rock-to-rock, cement-to-formation bond can drastically reduce the risk of hydrocarbons escaping from the formation or transmigration into aquifers. A rock-to-rock barrier equates to the safest, most effective way to prevent leaks in abandoned offshore wells. Once set, cement plugs create a hydraulic seal that conforms to the natural bedding and irregular surfaces of formations to eliminate leaks.

The Weatherford Endura dual-string section mill (DSSM) sets the stage for this permanent, verifiable rock-to-rock barrier. Plus, it can do so while fulfilling the strictest P&A regulatory requirements and halving traditional P&A rig time. The tool passes through 95⁄8-in. (244-mm) casing and stabilizes in 133⁄8-in. (346-mm) casing to enable sections of adjacent inner and outer casing strings to be milled in minimal trips downhole.

Next, the tool—which has an OD of 8¼ in. (210 mm)—easily passes through the ID restriction of the 95⁄8-in. casing string to reach the open section at the predetermined milling depth. Once in the 133⁄8-in. casing, three hydraulic stabilizer blades expand inside the outer 133⁄8-in. casing to center the tool, prevent lateral movement, and improve operational precision. Then the full-gauge cutting blades with a built-in stabilizer cut a window in the casing to prepare for the milling blades.

Lastly, milling blades are installed into the DSSM to remove the remainder of the casing. In doing so, the tool exposes the formation and prepares the wellbore for permanent, rock-to-rock cement plugging. Completion of the barrier includes setting bridge plug or an inflatable packer below the milled interval, and running cementing tools to spot the cement. Testing parameters for the integrity of the cement-to-formation bond vary, but typically consist of applying 1,000 psi (6.89 MPa) for 10 minutes.

It is the tool’s advanced blade technology that makes this level of performance possible. Separate milling and stabilizer blades provide multiple points of stabilization while creating fine, manageable cuttings for effective swarf handling and reduced bird nesting. The design of the blades and the precise placement of the inserts cut out radially and axially downward to improve milling. Additionally, the orientation and transverse travel path of the blades allow for full retraction to ease tripping out of the hole.

A major operator in Western Australia sought to permanently abandon an offshore gas well. Regulations required that a permanent barrier be installed outside of the 95⁄8-in. and 133⁄8-in. casing strings. 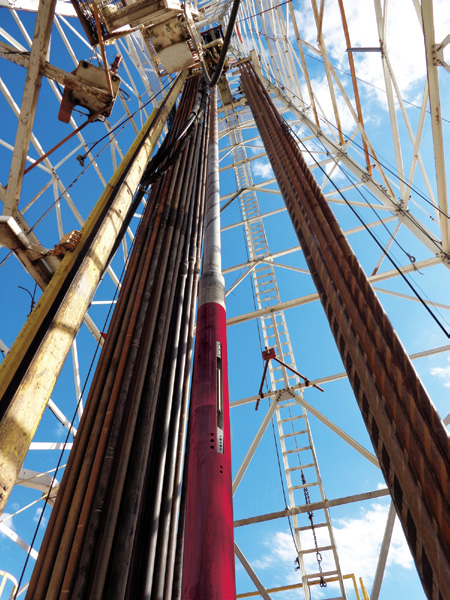 However, a top-up cement job—placed between the 95⁄8-in. and 133⁄8-in. casing strings—prevented the operator from cutting and pulling the 95⁄8-in. casing. The restricted 8.681-in. (220-mm) ID of the 95⁄8-in. casing also limited the type of milling tools that could be run. Additionally, the operator had to abandon the well in accordance with stringent regional requirements for well abandonment, which in Australia are dictated by the Specific Requirements as to Offshore Petroleum Exploration and Production. For this operation, the scope of work and regulatory demands necessitated using a new technology.

There were many reasons why the Endura DSSM was the optimal technology for this operation. The operator determined that it was the only technology capable of passing through the narrow inner-casing ID, stabilizing itself in 133⁄8-in. casing, and milling a large section of the 133⁄8-in. casing successfully. Conventional methods of cutting and pulling sections of the nested casing strings were deemed uneconomical. Additionally, the tool minimizes operational risk by reducing the amount of casing that needs to be cut and retrieved to gain access to the leak path at depth in the formation. It enables greater specificity on where the window in the casing strings can be placed and only requires operators to mill the depth needed for a competent rock-to-rock barrier.

To complete the operation, Weatherford used a conventional section mill to remove a 115-ft (35-m) section of 95⁄8-in. casing to facilitate a clean, usable window in a single trip. After removing the eccentric 95⁄8-in. casing, access to the 133⁄8-in. casing was then possible.

On the second run, the DSSM bottomhole assembly—which was dressed in stabilizer blades and cutting blades for 133⁄8-in. casing—was run through the 95⁄8-in. casing to a depth of 807 ft (246 m) to perform the initial cut-out. With the tool at the proper depth, fluid pressure to the tool activated the stabilizer blades, which centralized the tool in the 133⁄8-in. casing. Once stabilization was achieved, the tool was rotated to enable the cutting blades to open a 3-ft (1-m) window. The tool was then pulled out of the hole and the cutting blades were removed and replaced with milling blades, which have an extended length of cutting structure.

Fitted with milling blades, it was then run down to the cut-out window and reactivated. Once again, the stabilizer blades centralized the tool and then the milling blades of the DSSM removed 98 ft (30 m) of 133⁄8-in. casing. By leaving this section of the hole open, the operator could install a rock-to-rock cement barrier within the stringent P&A regulations.

The result of the operation was that the DSSM exposed the natural formation outside of the 133⁄8-in. casing to allow for the placement of an uninterrupted cement barrier. The operation was completed in 147 hours, which saved the operator 4.9 days—or 118 hours—of rig time compared to conventional P&A methods. This time savings was valued at $1.97 million.

With a growing number of aging offshore/deepwater wells and increasingly stringent regulatory requirements, P&A with the goal of eliminating hydrocarbons leaks is becoming a more complex issue and a more costly, time-consuming initiative when using conventional P&A techniques. New technologies can improve on the capabilities of conventional P&A techniques to enable a permanent and impermeable rock-to-rock cement seal that covers the entire borehole. As a result, operators can complete P&A operations faster, at a lower cost, in compliance with the strictest regulations in force around the world, and with less long-term risk.