The use of probabilistic planning software has enabled Sinopec Oil & Gas Australia to carry out an abandonment project on the Puffin oil field in the Timor Sea, offshore northern Australia. 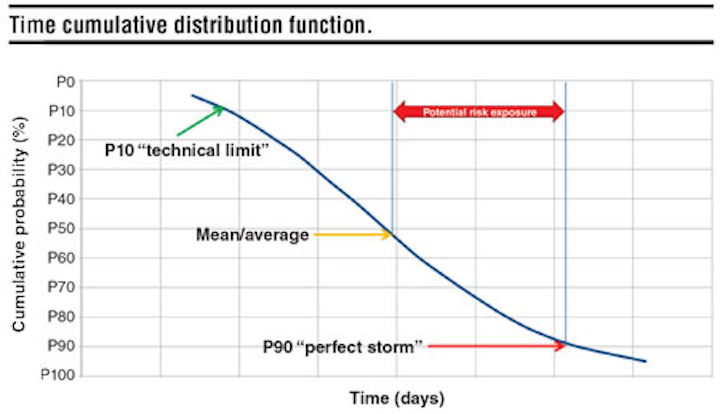 The project included planning, managing and executing the seven subsea well abandonment campaign. Even though the wells were less than 10 years’ old there were some challenging downhole conditions.

The Puffin field had produced around 2.2 MMb/d during the course of its lifetime with production ceasing in 2009. Before the campaign, the wells and subsea equipment were inspected annually by ROVs while approval was obtained to plug and abandon.

The project presented many challenges that made the abandonment process a difficult task. First, the field was situated in a remote area, located 435 mi (700 km) from the port of mobilization (Darwin), adding an additional 2,512 mi (4,042 km) by road to the main oil and gas hub in Perth.

All except for one of the five suspended wells required the BOP stack to be run, in order to pull the 9 5/8-in. slip and seal assembly to mitigate the risk of trapped gas. This was further complicated by the fact that a mixture of different wellhead types existed in the field. Three of the suspended wells had H4 type profile wellheads while all others had Cameron hub type profiles, which meant that the BOP required a connector change-out during the campaign.

The two production wells had dual bore trees meaning a dual bore riser system had to be utilized, adding a large amount of equipment and complexity to the operation. The five exploration wells were designed as gas lift wells and approximately 1,600 psi lift gas was known to be present in the annulus, which would require flaring-off.

Furthermore, numerous drift runs on the Puffin-7 production well failed to reach the target depth due to corroded or broken tubing, thus requiring contingence operations to be executed to P&A the Puffin 7 well.

The P&A team was kept small to keep efficiency, focus and control high from planning through to the offshore project execution.

The P&A operations were sequenced such that the blowout preventer connector change-out could be carried out without disrupting the rig’s critical path activities.

Due to the presence of annulus gas and the possibility of hydrocarbons in the annulus, a decision was made to mobilize a bleed-off package and additional surge tanks. This decision proved critical to the campaign’s success as large volumes of oil were found to be in the annulus of both production wells.

Tubing issues on the Puffin-7 well required deviation from the P&A program and contingency operating procedures and contingency tooling had to be called off upon. AGR’s P&A team was able to promptly devise alternative solutions and put procedures and equipment in place to complete the plug and abandonment with minimal impact to the project budget.

The ability to use AGR’s probabilistic planning software P1 helped the team to identify and quantify risks in the planning stage.

AGR’s P1 software generated flow charts of the well abandonment steps ensuring that all personnel involved in the operation could easily understand what would be happening at each step and reduce the chances of confusion. In addition, it also gave a clear demonstration of which operations carry high financial risk with required mitigation efforts and which operations do not require much contingency, hence increasing the planning efficiency and allocation of funds significantly. This method of displaying the risk also made it simple to communicate the risk to new team members or to other stakeholders such as senior management, JV partners or government bodies.

Generating probabilistic outcomes allowed the team to prepare solutions and ensure that the equipment, personnel, chemicals etc. were available either on the rig or ready for mobilization as each phase was approached. Planning was essential given the very limited deck space that was available during the operation.

The project was completed successfully within 1.6% of the submitted authorization for expenditures (AFE). This included unforeseen circumstances that, if deterministic planning had been used, would have put the project well over the submitted AFE.