While 2015 was a difficult year for the offshore oil services, equipment and drilling industry, 2016 appears likely to be worse. 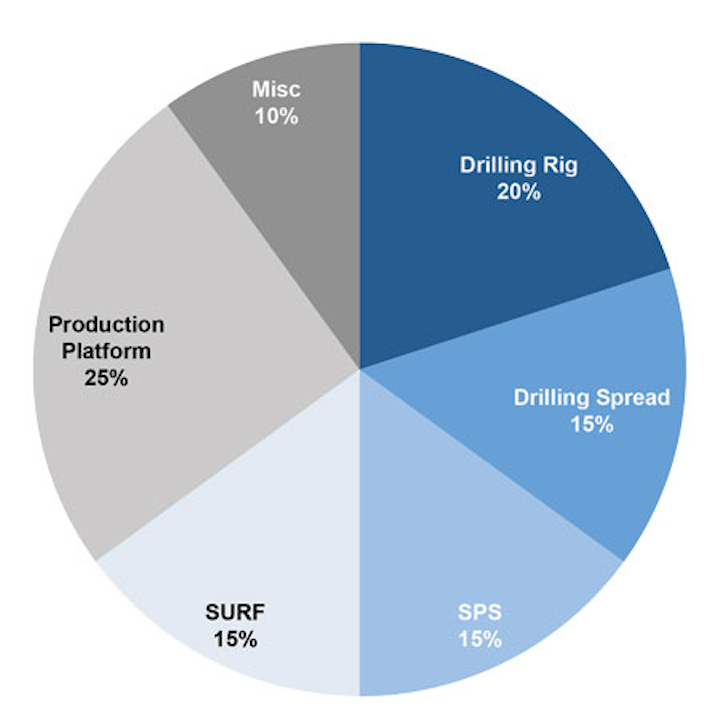 While 2015 was a difficult year for the offshore oil services, equipment and drilling industry, 2016 appears likely to be worse with major capital spending reductions continuing, a lack of FIDs for large offshore and in particular deepwater projects, and substantial and continued pricing pressure as firms compete for a dwindling number of project awards. The shale revolution in the United States coupled with massive delays and cost overruns on many high-profile offshore projects has ended the 20+ year deepwater upcycle and the industry is falling into its very first real downturn.

The problems withdeepwater are clear: the economics are weak when compared to most other options for finding and developing reserves; the capital and cyclical risks are severe; and shale has turned the traditional deepwater drillers into a mode of reconsidering offshore developments.

Offshore developments require high upfront investments including leasing expensive acreage, shooting and interpreting seismic, contracting large offshore drilling rigs, and designing and contracting for the necessary infrastructure. The offshore arena has primarily been the domain of the major and super major oil companies along with select NOCs for this reason. With large upfront investments and a significant lag between cash outflows and inflows, only these companies had the resources to participate.

The majors and super majors are currently moving through periods of capital austerity and many offshore projects are being pushed to the right or canceled as these projects do not meet new capital return profiles. The same is true for many of the NOCs that have traditionally been large supporters of offshore operations; and several of these have also become distressed in the current oil price environment. High maintenance and reinvestment costs as well as environmental risks, geographic remoteness and technical challenges also play a role in deciding where to allocate limited capital. All of these factors are driving that capital onshore.

Shortening development cycles and lowering costs are a must. Since 2010, the deepwater project development cycle doubled from five years to 10 years. Minor changes in project scope, change orders, slow decision making and resource chain mismanagement all played a part in the ballooning of the development timeline. This lowered returns, increased cyclical risks and typically added substantially to the overall cost of the project.

For example, and assuming a return to $70 Brent and $65 WTI, we believe the payback time for a typical oil shale well is two to four years with an IRR of 25-35% while for a typical offshore well (both shallow and deep) the payback period is 11 to 14 years, with IRRs ranging from high single digits to mid-teens.

The good news is that the downturn is already lowering costs across the supply chain. We believe the total cost of a typical offshore development project is already down 20%. The cost for an offshore drilling rig has fallen 50%, the spread costs are down 20%, while SPS (subsea production systems), SURF (subsea umbilicals risers and flowlines), and production platform costs are off by ~15%. However, a lot of these cost reductions are cyclical in nature and when the upcycle for offshore returns, inflation will creep back into the system. This is why a restructuring of the offshore is now underway - to drove costs out structurally.

By shortening the development time and lowering costs offshore, deepwater can once again be economic, and perhaps show superior economics than the flavor of the day, oil shale. The solution is a complete change in the commercial and business models by the oil service industry and a willingness by the oil companies to adopt these new models. That solution is in the early days, and OneSubsea and Forsys Subsea are the start. We believe both OneSubsea and Forsys Subsea, while taking a different approach, are game changers.

TheOneSubsea approach is geared towards optimization. At the base level, OneSubsea’s goal is to drive enhanced oil recovery from offshore operations. Combining Schlumberger’s reservoir knowledge and Cameron’s subsea hardware expertise the idea is to apply enhanced technologies, especially in the spheres of lifting, boosting, and flow assurance, to double recovery rates and dramatically improve the IRRs of subsea projects.

The idea ofForsys Subsea is different and through the combination of FMC Technologies SPS expertise and Technip’s SURF capabilities the goal is cost and timeline reduction. By working together, the aim is to simplify the subsea hardware, the interfaces with the SURF equipment, and generate a step change in subsea designs. Forsys believes it can lower overall development costs by 10% or more.

We believe both approaches have their merits and a combination of the two, a real vertical integration from reservoir to the surface of the sea will be the ultimate outcome. Simpler and standardized equipment and layout designs coupled with powerful monitoring equipment and enhanced data sets will, in our view, generate a viable and bright future for the offshore industry.

This year will be a challenging one for all parts of the offshore industry. The providers of large machinery such as offshore rigs, offshore construction vessels, and supply boats will see persistent reductions in asset utilization and continued pricing pressure. The SPS and SURF providers will experience declining backlogs, choppy order inflows, and more pricing pressure. The marine seismic business will experience more vessel stacking and further demand declines. It will not be pretty and balance sheets will become stretched; some M&A may be likely as a result. And unfortunately we believe, unless oil prices show a dramatic spike and are sustained at much higher prices for a longer period of time the business is not likely to get better the following year either. To be viable the offshore industry will change. This change has just begun.

Thedrilling companies will continue to retire older assets and squeeze costs out of the system, the vessel providers will scrap old equipment and stack newer generation equipment that cannot find work, while the SPS and SURF providers that have formed alliances will work through FEED studies, pitch the new way of doing business and should be greeted by an oil industry that is craving change.

As cycles go, this downturn is a tough one - but a necessary one. Offshore became bloated with continued growth and then was confronted with the challenge of shale; it is now up to the offshore industry to adapt, to change, to once again become a competitive resource base. In the last year we have spoken to numerous executives, presented at various conferences, and interacted with all levels of participants in the offshore arena. In that process, we have become more encouraged that the industry recognizes the challenges, believes in change, and is focused on delivering.