Last year was a tough one for the oil and gas industry, as spending and headcounts were slashed and the specter of bankruptcy became an impending concern for some. Recent trends in commodity prices have not helped, says Andy Jenkins of Douglas-Westwood. 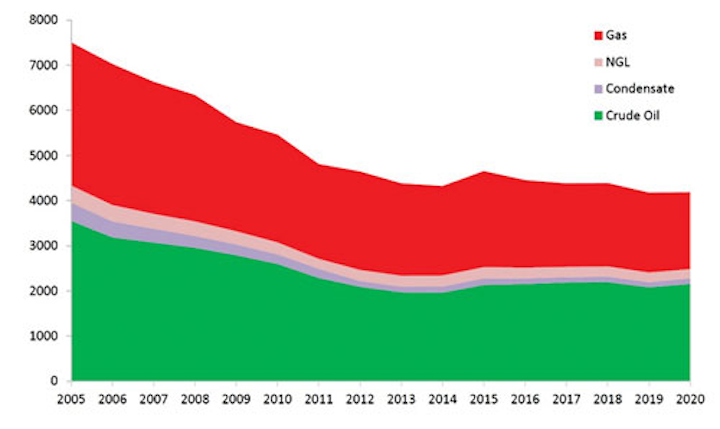 A return to lean and mean?

Last year was a tough one for the oil and gas industry, as spending and headcounts were slashed and the specter of bankruptcy became an impending concern for some. Recent trends in commodity prices have not helped, says Andy Jenkins of Douglas-Westwood. He notes that late December saw Moody’s downgrade its price forecast for 2016 by 17% and a further dip in the price of oil, with Brent crude falling to the lowest level since 2004.

Producers have continued to produce and new Iranian output may result in even more oversupply. By all accounts, 2016 is shaping up to be just as challenging as 2015.

If prices remain low, one thing is clear, says Jenkins: 2016 is lined up to be a year of consolidation. Cost savings are required to ensure that future developments are economically viable. Project optimization and supply chain improvements will be key in reducing costs. However - at current prices - industry consolidation will play a large part in ensuring the cost-effective development of projects.

In all likelihood, 2016 will see the completion of two E&P and OFS deals - with Shell and Halliburton acquiring BG Group and Baker Hughes, respectively. Further M&A activity is expected - those with strong balance sheets are in line to benefit from a wealth of distressed assets. This is particularly clear in the drilling sector - since 2014’s drop, firms have relied on credit markets to keep rigs going. With prices below $40, this option will dry up, forcing a search for partners. This year looks to be a difficult one for all involved. Yet, for those companies that are well positioned, there is likely to be a plethora of opportunities, Jenkins commented.

John Fredriksen, owner of offshore drilling company Seadrill, has created a new firm called Sandbox to purchase distressed rig assets from shipyards. With rising numbers of canceled and delayed newbuilds sitting at shipyards as offshore drillers focus on de-risking their balance sheets, Raymond James stated the new company should be able to acquire floaters and jackups at a discount.

The firm intends to take advantage of the downturn to make smart investments that may pay off when the offshore drilling market recovers. Raymond James stated: Sandbox is one of the first firms to vocally declare its intentions to invest in distressed rigs in the near term. Though many firms within Raymond James coverage have expressed interest in the acquisition of distressed assets, they generally believe the bid/ask spread is too wide.

Production from the North Sea is expected to remain constant over the next five years as operators focus on redeveloping mature discoveries and reversing the production decline of the last decade, says Olga Kerimova, analyst, and Theodora Batoudaki, analyst, Rystad Energy. From 2020, Johan Sverdrup will play a significant role in maintaining this trend.

Norway and the UK make up about 90% of the region’s production; however, production has been declining historically due to natural decline of mature fields, such as the Norwegian fields Gullfaks (Statoil-operated), Ekofisk (ConocoPhillips), Sleipner (Statoil), and Oseberg (Statoil). In 2015, production is expected to increase. The main drivers for this growth are the mature fields Oseberg and Gudrun that produced more than expected, partly as a result of a reduction in maintenance during the summer months of 2015. Additionally, operators have focused on extension projects on already producing fields such as Ekofisk South and Valhall. From 2016 on, production is expected to stabilize at around 4.2 MMboe/d. The contribution of Johan Sverdrup, the largest discovery of the last decade, is visible in 2020, when the field is expected to start producing. From 2020 on, Johan Sverdrup is estimated to be the field with the second most significant contribution to production, after the giant Norwegian field, Troll.

Spending levels have increased significantly from $50 billion in 2010, peaking at almost $80 billion last year, followed by a significant drop expected in 2015 and into 2016 due to the fall in the oil price. Capex reached around $21 billion in 2010, with an expected growth to approximately $34 billion by 2020. The increase in spending over the last five years is primarily from mature fields in the Norwegian North Sea, such as Troll, Ekofisk and Gullfaks, as well as the recent Edvard Grieg and Jasmine discoveries, Rystad Energy commented.

In 2015, an increase in North Sea production is expected, partly as a result of lower maintenance throughout the year and as new development projects come online. Production is estimated to remain stable until the end of the decade. Investments are expected to start increasing again from 2017, as the development of the major discoveries Johan Sverdrup (2010) and Culzean (2008) progresses. No significant increase is expected in exploration activity in the region, validating the focus on stable growth from developing existing discoveries and mature fields.