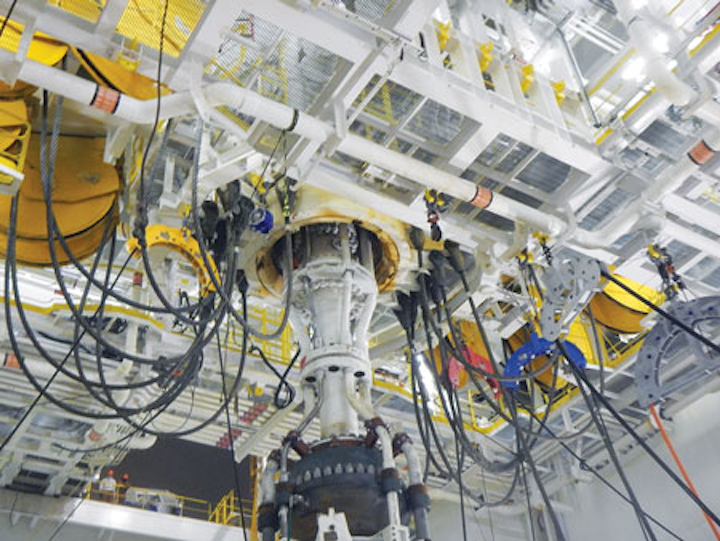 Thus, while no cut-and-dried checklist exists for what constitutes a prospective MPD well, the increased risks of well-control issues and related costs make the deepwater environment ripe to adopt closed-loop drilling techniques. The mandate to reduce the risks and costs of offshore development is driving industry-wide efforts to break down the remaining technical and regulatory obstacles to the wholesale integration of MPD systems on classed floating drilling rigs.

MPD originated as a technique for drilling trouble zones in onshore and shallow-water applications, and soon evolved into a standard practice for drilling the most difficult wells. However, transferring what had become a routine land-rig technique to deepwater semisubmersibles and drillships involved a steep learning curve. Unlike typical surface BOP applications, the integration of MPD systems with the existing risers of floating drilling rigs creates two barriers: an RCD for top-of-the-riser pressure containment and an upper marine riser annular preventer. Failure of either barrier, or any component in the system front, can lead to severe consequences in deepwater scenarios, further heightening the need to conduct a thorough case-by-case evaluation before initiating the integration process.

Much of the planning required when installing an MPD package onto an existing floating rig involves integrating equipment and re-evaluating techniques such as tripping, flow checks, kick drills, and well control. This is due to the installation and operation of the subsea RCD, including its integration with a riser gas handling (RGH) device.

No consistent industry-wide rules or standards currently exist to guide the integration and application of MPD on floating drilling rigs; class societies and regulatory bodies are working toward classifying MPD systems and their respective components. Experience has proven that the application of MPD offshore requires extensions and modifications to the design of critical components to help ensure safe operations in harsh environments.

Aside from the dearth of standardized sub-components, the rig-up of a MPD system on a floating drilling rig is enormously complex. Integration experience has shown, for instance, that it is imperative to consider the inside diameter; drift; tension ratings of marine risers; tension ring; upper flex joints; and the telescopic joint during planning stages to prevent issues during deployment. Further, the rig-up process must also include planning for fire and gas system upsets, emergency shutdown events, and emergency disconnects.

The customized network of umbilicals, control systems, piping and valves in the moonpool area is among the more critical and arduous elements of an aggregate rig-up. The pipe and valve system must be able to accommodate conventional drilling and seamless conversion to MPD, pressurized mudcap drilling, early kick detection, or RGH when required.

Despite the significant challenges, MPD integration on existing floaters, which took hold in the Asia/Pacific region, has since expanded worldwide with impressive results. Over the past decade, the MPD methodology has been used extensively and effectively in water depths exceeding 7,500 ft (2,286 m), with the frequency and complexity of targeted wells increasing appreciably.

More recently, an operator in Angola requested the permanent integration of an MPD package on an under-class drillship. MPD was seen as the only viable solution to minimize losses, control gas migration and, most importantly, provide early kick and loss detection, particularly in the 181⁄8-in. section.

Overall, the MPD system enabled the operator to avoid total losses while effectively controlling nuisance gas, and to safely reach total depth at a significant savings in both drilling time and associated costs.